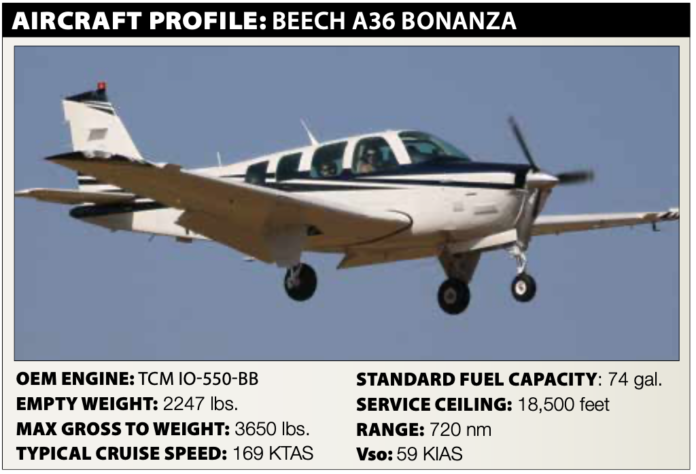 The thing about airborne emergencies is that there are not that many scenarios in which using the radio will help. Sure, getting lost or trying to find better weather come to mind, but most emergencies depend on the pilot or crew to resolve them without external help. Failure of a single-engine airplane’s powerplant is an example. An engine failure should jump-start memories of our training: fly the airplane, trouble-shoot the problem and find a suitable landing area, pretty much in that order, with flying the airplane a continuing theme.

Yes, ATC often can be an asset—they’ll at least know where to send the equipment—but the pilot/crew must be the one to make the decisions. This includes where and how to execute an emergency landing, and realization that an open piece of ground right underneath might be preferable to the sometimes iffy proposition of trying to glide to a nearby airport.

On August 28, 2017, at 0839 Eastern time, a Beech A36 Bonanza was destroyed when it collided with trees and terrain near Ellabell, Ga., during a forced landing following a complete loss of engine power. The 39-year-old commercial pilot and his two passengers were fatally injured. Visual conditions prevailed; an IFR flight plan had been filed. The flight originated at Savannah, Ga., destined for Kennesaw, Ga.

At 0835:46, with the airplane about 16 miles northwest of the departure airport, the pilot declared an emergency and reported the airplane’s engine had failed. The tower controller provided directional guidance to the Cypress Lakes Airport (GA35) but expressed concern about whether the airplane would glide that far. The final communication received from the pilot was at 0838:57, when he stated the airplane “would probably make it.” The final radar data point, at 0839:39, showed the airplane at 400 feet msl. At that time, the airplane was about 0.1 mile from the accident site, and about six miles from GA35. 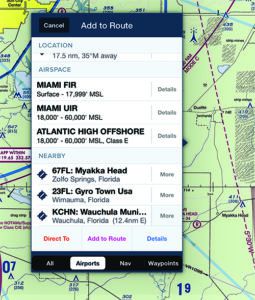 It’s always a good idea to know where the nearest airport is. If we don’t bother to keep track of every grass strip passing under our wing, the miracles of GPS and moving maps literally make it child’s play to turn over that task to the automation.

Every aviation-dedicated GPS navigator we’re aware of, whether portable or panel-mounted, has a button, often labeled “NRST,” that can bring up the nearest airport’s information and, with the push of another button, navigate to it. It’s likely the GPS navigator you use can even be configured to, for example, ignore seaplane bases and/or heliports.

The capability is even available in your electronic flight bag app, which likely can be configured to constantly display the nearest airport’s identifier, direction and distance. Otherwise, a long tap probably brings up the same information.

Bottom line? There’s no excuse for not knowing where the nearest airport is.

The airplane impacted trees and terrain in a swampy area at a GPS elevation of 59 feet. The forward fuselage was crushed rearward. Both wings exhibited rearward crushing. The crush angles indicated a ground impact that was about 25 degrees from the vertical. Broken tree limbs and trunks indicated a descent angle of about 45 degrees. Flight control system continuity was verified. The flaps were retracted, as was the landing gear. No pre-impact defects were noted with the airframe.

There was a hole about two inches in diameter in the top right rear of the engine case. The crankshaft was visible through the hole. Subsequent teardown of the engine revealed the No. 1 connecting rod was separated from the crankshaft and its piston.

Four of the eight nuts retaining the No. 1 cylinder and one nut that retained the No. 2 cylinder were loose. Two of the loose nuts on the No. 1 cylinder were on the through-studs that provided clamping force on the No. 1 main crankshaft bearing. Disassembly revealed that the No. 1 main bearing had shifted to the rear of the crankcase, which obstructed oil flow to the No. 1 main and connecting rod bearings. All other connecting rods exhibited normal operating signatures with some mechanical damage from the loose components in the engine. No other pre-impact anomalies were detected. The engine had accumulated 226.6 hours since all six engine cylinders had been replaced.

Although GA35 was depicted on ATC’s emergency obstruction video map (EOVM) used in handling the accident flight, GA43 was not. The FAA policy in effect at the time of the accident provided guidance regarding items depicted on the EOVM and stated the basic design of an EOVM must incorporate, among other items, satellite airports and other airports that could serve in an emergency. The policy did not, however, include guidance on which airports are essential for depiction on an EOVM.

After the accident, GA43, along with several other small airports in the area, were added to the Savannah tower’s EOVM.

The NTSB determined the probable cause(s) of this accident to include: “The total loss of engine power due to oil starvation to the No. 1 connecting rod, which resulted from the improper torque of the No. 1 cylinder hold-down bolts and through-studs at the time of the cylinder’s installation, which resulted in the failure of the connecting rod due to oil starvation. Contributing to the accident was the omission, from the air traffic control emergency obstruction video map, of a closer alternate airport for the emergency landing.”

There were four opportunities to prevent this accident. The first involved installation of the new cylinders, and the incorrect process by which the No. 1 cylinder’s mounting hardware was installed. The second involved the tools used at the Savannah ATCT to assist aircraft in emergencies and its omission of a nearby turf field. Those missed opportunities are on people other than the pilot.

The third and fourth opportunities are on him, however. The NTSB notes that the pilot made a wide turn, covering about 6.3 nm, when changing course toward the divert airport, GA35. It’s pretty clear that non-urgent turn wasted time and altitude the pilot may have used to reach GA35.

The fourth opportunity involves the pilot taking it on himself to find a suitable landing area rather than depending on ATC. Importantly, a suitable landing area doesn’t have to be paved, or even an airport. It’s likely the Bonanza had some device that would have highlighted and navigated to the 2300-foot-long turf strip, GA43, which is charted on the current sectional.

Yes, 2300 feet doesn’t leave much room for error, but it’s more than a Bonanza needs under most circumstances. I’ll take 2300 feet of level ground just off the right wing over a paved runway more than six miles behind me every single time.