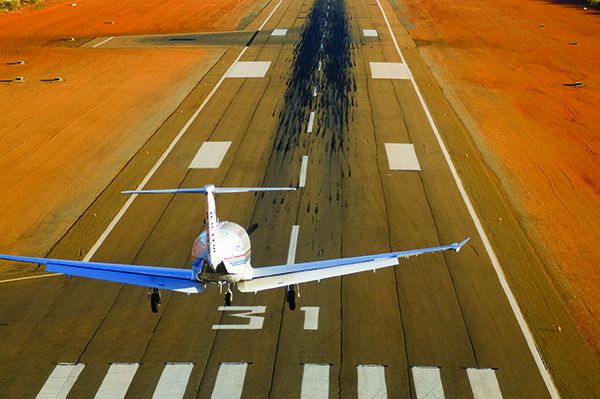 Put another way, managing an airplane’s energy is a key concept in any attempt to understand various flight phases, obtain desired performance and put it where we want it, in high-speed cruise, on the glidepath or in the touchdown zone. But we don’t always get it right the first time, whether due to poor planning, distractions, mechanical issues, weather or inexperience. The AFH calls these occurrences “energy errors,” and further breaks them down into “total energy errors” and “energy distribution errors,” or some combination of the two. The sidebar below explains these terms in greater detail.

The AFH describes an energy error as an “altitude and/or airspeed deviation from an intended target expressed in terms of energy.” Think of it as a mismatch between the desired airspeed, altitude or both.

“The airplane has too much or too little total energy relative to the intended altitude-speed profile. When this error occurs, the pilot will observe that altitude and airspeed deviate in the same direction (e.g., higher and faster than desired; or lower and slower than desired).”

“When this error occurs, the pilot will observe that altitude and airspeed deviate in opposite directions (e.g., higher and slower than desired; or lower and faster than desired). An example would be an airplane on final approach that is above the desired glide slope and at a slower airspeed than desired.”

The FAA’s goal here is to get pilots to think about the airplane’s energy state, and to “translate altitude-speed deviations into energy errors,” as described below. Employing energy-management principles, total energy errors are to be corrected using power: increasing or decreasing it. Correcting energy distribution errors, meanwhile, should be accomplished using the pitch control. Errors that combine total and distribution energy errors—you guessed it—are corrected with both power and pitch.

One of the keys to understanding the concept of energy errors is to think in terms of altitude and airspeed, not pitch vs. power alone. It’s also key that the need to coordinate these two forms of energy (airspeed equals kinetic energy; altitude equals potential energy) is just as important as coordinating pitch and power, or rudder and aileron for that matter. Focusing on one while ignoring the other in these three pairings typically leads to poor results.

But it depends. For example, if you’re low on final approach but have plenty of airspeed, increasing pitch will arrest the descent, with the commonly understood transaction of trading altitude for airspeed.  Conversely, if you’re high on final but also slow, decreasing the pitch attitude will resolve the problem of having too much altitude, perhaps trading it for an increase in airspeed. Importantly, if you’re on-glidepath and on-speed, you don’t need to do anything—your energy state isn’t in error. The graphics above, adapted from the AFH, may help explain not only the relationships involved but also the need to balance and coordinate (there’s that word again) the two.

The table at the top of the page presents a matrix of the three basic airspeed and altitude conditions: too much, too little and just right. The center cell of the table is the “Mama Bear” location, where everything is just right. Colored green for obvious reasons, it’s the location describing energy conditions that are not in an error state. Moving diagonally down and left away from the center, we encounter the reddest cell, where we’re both low and slow, a situation requiring (coordinated) increases in both power and pitch.

Moving diagonally to the upper right, we see that the bluest cell denotes a situation in which both altitude and speed are high, one in which we may not need or want to do anything. The remainder of the table’s cells, tinted in lighter red, green or blue, may demand an adjustment in speed or altitude to return to the desired greenest center cell.

The circular diagram in the middle of the page is another representation of the same basic scenarios, but with infinitely more variations. The idea, as we all should realize, is that the pitch and power inputs we make in adjusting the airplane’s flight path also are infinitely variable, as any student pilot attempting their first landing will attest. 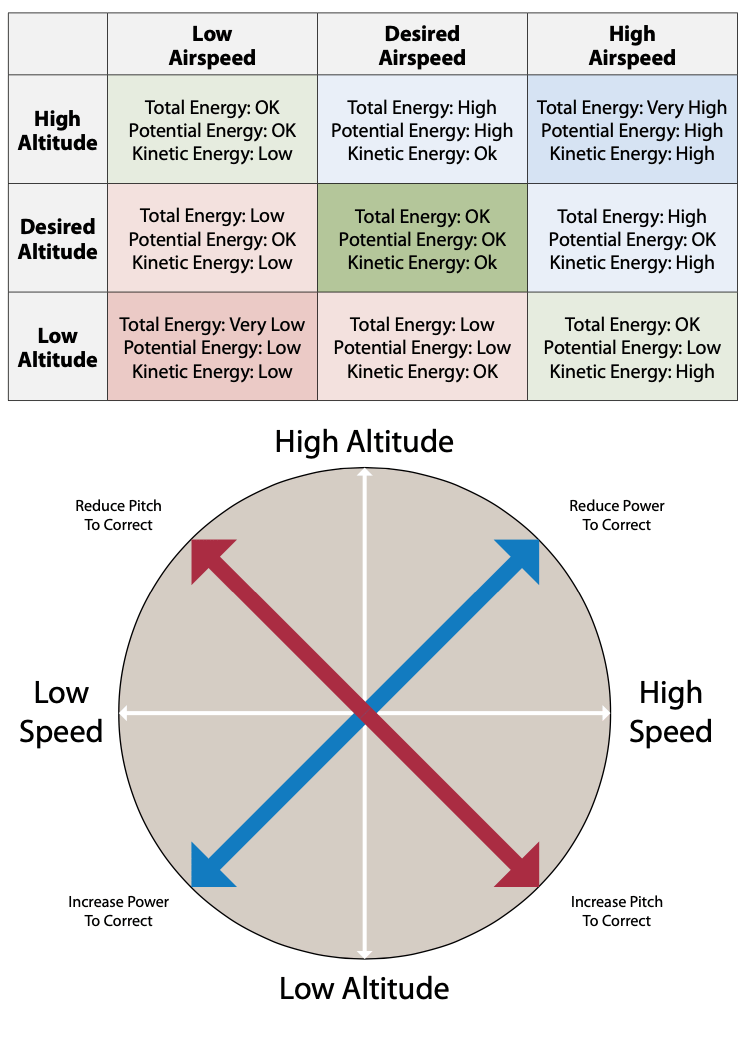 Anyone who’s successfully soloed an airplane has done exactly what the table and the circular diagram present: manage its energy to achieve the desired outcome. The value of all this is another conceptual tool to get pilots thinking about what they may want to do when they’re in the extreme corners of the desired airspeed/altitude table or near the edges of the circular diagram. Depending on the mission or the procedure being performed, we may not want to do anything, at least not immediately.

But if we don’t understand the airplane’s energy state, we also may not understand what we should do when we realize we’re low and slow, and perhaps too close to the ground. Thinking in these terms also should help us before we get into one of these corners or near the outside of the circle, and maybe remind us that the airplane’s energy state is perhaps headed someplace we’d rather not be. The remedial action(s) should come naturally, and be designed to correct the energy error and place us back on an even keel at the center of the table or the circular diagram. It really is that easy.