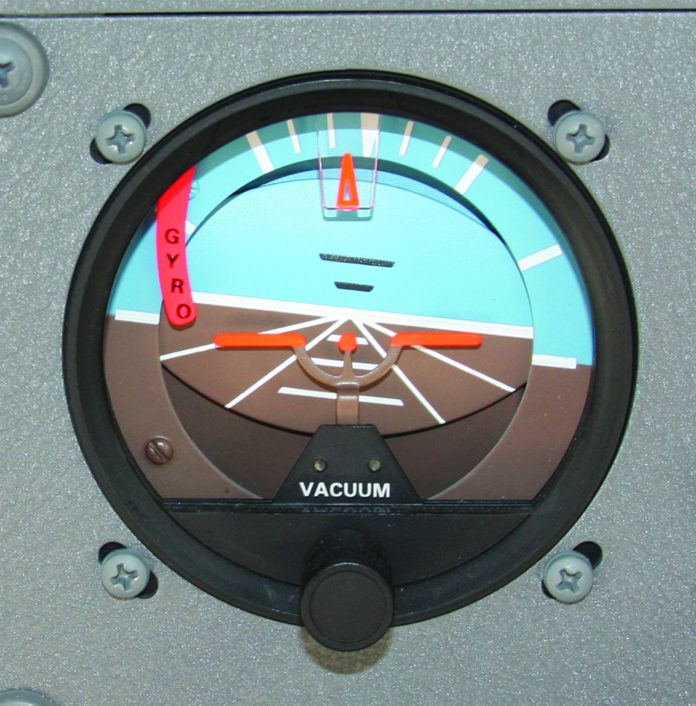 I was flying a 2002-model A36 Bonanza (yeah, with me it’s always a Bonanza) home to Wichita from Thanksgiving in Ohio with my wife and our son aboard. Somewhere over Indiana, the Bonanza’s attitude indicator (AI) began to tumble. The failure announced itself slowly, but very soon the instrument was pitching up and down in very distracting oscillations. It then displayed a range of indications—from off-scale nose-up pitch excursions to slightly below 20 degrees nose-down—in a roughly two-second cycle, while indicating bank angles between wings-level and about 10 degrees left.

The airplane was trimmed for level flight before the AI failed, so it was close to trimmed now, plus or minus a little “control pressure” that had been applied by the autopilot. So any loss of control would have been entirely my fault. All I had to do was to keep from making gross control inputs and the airplane’s natural pitch and yaw stability would keep me upright and straight, at least in the short term. It is important to keep the wings level to avoid entering into a spiral. I did so gently by holding heading with rudder instead of trying to make small corrections with the yoke—this made my inputs less likely to impact all three axes of flight, and the Beechcraft’s aileron/rudder interconnect tended to coordinate small rudder pressure inputs well.

Five things were going for me (and my wife and son). First, I was in visual meteorological conditions (VMC). Attitude control was as simple as looking outside the airplane. Second, I regularly practice partial-panel flight. This keeps my scan sharp—and at least as importantly—emphasizes the need for very light, very small inputs on the controls in partial panel flight.

Third, the A36’s heading indicator is electric, not air-driven. It continued to work, making identification of the failed instrument easier and partial panel control much less challenging. Fourth, the autopilot disconnect told me immediately that the gyro had failed—or at least that something had changed and I needed to find out what it was. Finally, I’ve spent the last 24 years studying and teaching aircraft systems operation. I know how the attitude indicating system works and how it interfaces with the autopilot.

A quick scan at the usual suspect, the gyroscope’s power source (an instrument air pump in the case of this A36), revealed indications of normal air pressure on the instrument air gauge. The late-model Bonanza’s INSTR AIR light was not illuminated. It appeared the gyroscope itself had failed, not the pump driving it.

Even though I was virtually certain it would make no difference, I activated the airplane’s standby instrument air pump. The STBY AIR annunciator lit up, and the instrument air gauge showed a very slight uptick in pressure—both expected indications. Also as expected, nothing changed.

A tumbling gyro instrument is amazingly distracting. That’s easy to fix. I always fly with a stack of sticky notes handy for a number of purposes. One is to quickly cover up a failed instrument. It’s much easier to fly “partial panel” without the distraction of the gyrating gyro.

The FARs required a report to ATC and terminating flight when it was no longer equipped for the type of flight operation (IFR in this case). The airplane’s limitations also require a functioning AI for IFR flight. Luckily, I was in very clear skies and flying directly toward the center of a dry high pressure system. I called up the satellite imagery on my Garmin 796 portable and confirmed there wasn’t a cloud in the sky between my position and home. I canceled IFR and continued the trip home.

General aviation autopilots these days can be broken down into three basic flavors: digital and analog attitude-based and rate-based products. Their basic differences and characteristics can include:

These products directly interface with electronic flight instruments and navigation devices. They are extremely accurate and smooth, but if any of the attitude instruments or displays fail, the autopilot is degraded or shuts down entirely.

Attitude-based autopilots are generally next in terms of accuracy and smoothness. They reference the primary attitude indicator, as well as heading and navigation displays. Again, that means that if one of these instruments or devices fails, the autopilot disconnects and is no longer operative.

Rate-based autopilots are generally considered the least-accurate and least-smooth type. These autopilots usually link to the turn coordinator, as well as some heading and navigation interface. Although sometimes seen as less desirable because of their relative inaccuracy (in my experience, some rate-based autopilots are still very accurate and smooth), they have a distinct advantage in that in the most hazardous instrument failure—that of the attitude indicator—the autopilot is unaffected and remains fully functional. Lose the AI in an airplane with a rate-based autopilot? Turn the autopilot on, if it’s not already, and fly fully coupled to a landing as soon as practical.

If you don’t know the autopilot type in the airplane you fly, which instruments it references and how it responds to one or more failures, especially the attitude indicator, you can learn about it in the autopilot’s supplement to the POH or AFM.

There is no checklist for “attitude indicator failure” in most Pilot’s Operating Handbooks. This is one of those things we’re expected to consider ahead of time to develop a course of action, based on installed equipment, weather and a host of other variables. Your personalized checklist might include:

• Maintain control of the airplane. Do not retrim unless you (or the autopilot) was retrimming at the time the failure occurred. Keep the pitch trim where it is until you need to change it with a change in flight conditions. Use very light control inputs and limit use of the ailerons.

• If you have an autopilot and it’s still working, use it. Right or wrong, we IFR pilots often pride ourselves on our ability to fly partial panel so much that we’re unwilling to do the one thing that will save our lives—turn on the autopilot. Don’t be a hero. Use it.

• Identify the failed instrument. Crosscheck supporting instruments to determine which, if any, has/have failed. See the sidebar above for more ideas.

• Confirm the failure. Check other indications, such as an instrument air pressure or vacuum gauge, or electrical indicators with electrical instruments. If you need more help to confirm, smoothly level the wings by reference to the attitude indicator. Then check the turn coordinator/turn and bank and the heading indicator. If two indicators agree, then it’s a good bet the third has failed.

• Cover the failed instrument. Remove the distraction of a dead or wobbly indicator.

• Use backups, if available. Activate backup instrument air or electrical sources. Switch your scan to backup instrumentation if you have it and it’s placed within your primary scan. Don’t forget unofficial aids, like synthetic vision and GPS for heading as well as handhelds, even your EFB, for attitude.

• Use known combinations of power, flaps and gear position, and as best as possible, pitch attitudes to cautiously control the airplane through the remainder of your flight. Aerodynamics don’t care what an attitude indicator or other failed instrument says—the aircraft will still respond predictably to changes in power, configuration and attitude.

• If you’re in VMC, stay in VMC, even if that means going well out of your way to land.

• If you can’t remain in VMC, declare an emergency. Accept any and all help you can get to make a safe arrival at the nearest airport with above-minimum weather (the higher, the better) and that has an approach with vertical guidance to help you fly your approach. This is much more common now with the proliferation of approach-certified WAAS GPS navigators.

Those of us flying with traditional, non-glass instruments do not have the luxury of red Xs telling us categorically and immediately that an instrument has failed, never mind which one. If you suspect you may have a failed instrument, here’s a methodical technique to troubleshoot the gauges:

Hold the attitude indicator wings level with the nose on the horizon. Is the heading holding steady? If not, which of the two—heading or attitude—agrees with the turn in 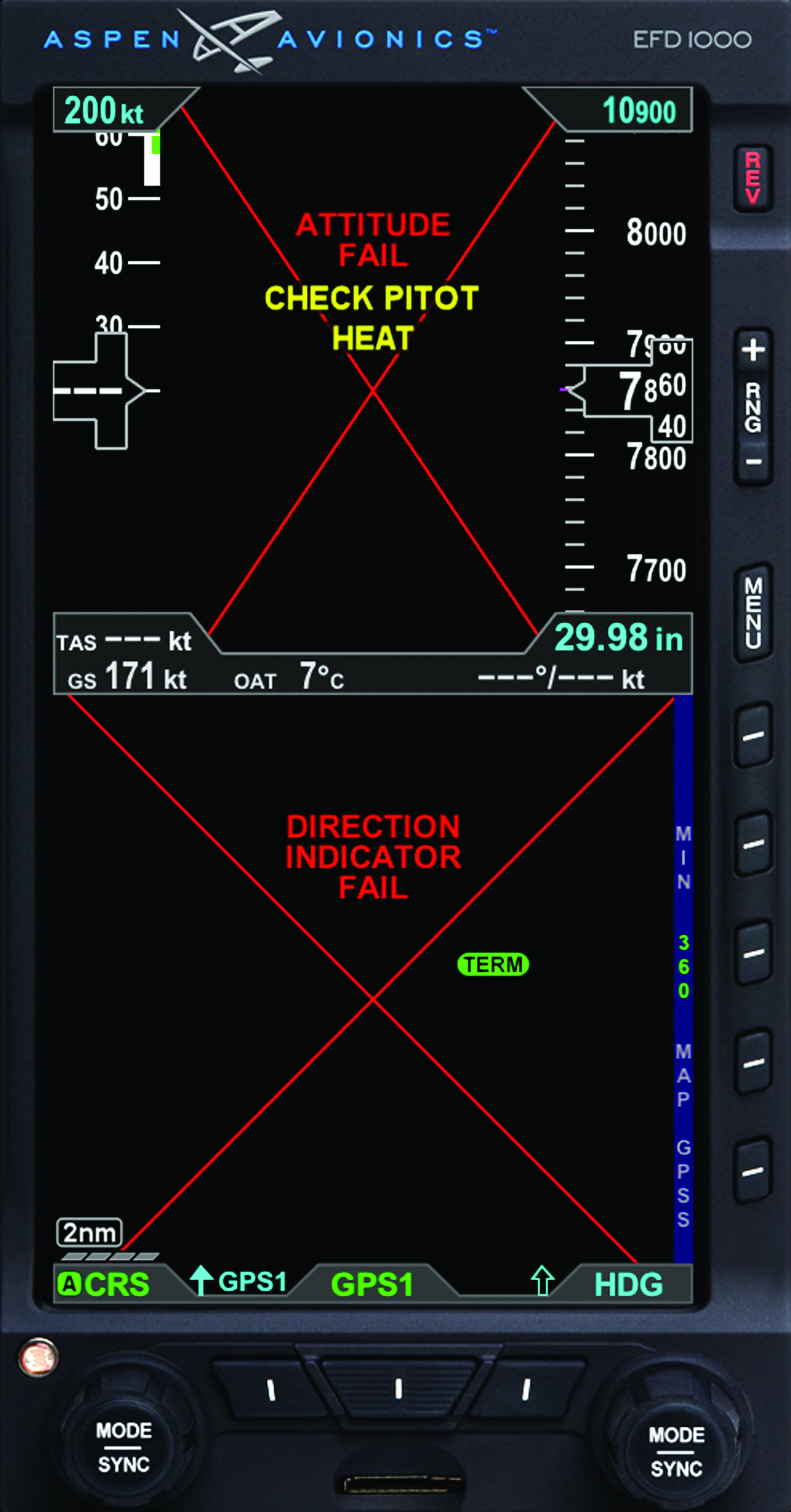 dicator? Use whichever two are in agreement to overrule the third.

Looking at the attitude, pitch the attitude slightly up, just a couple of degrees. Is the altimeter showing an increase? Is the vertical speed indicator in agreement with the attitude change? Again, use two indications to confirm or overrule a third.

Once you have identified a failed instrument, cover it with a sticky note or something else that will stay where you put it and obscure the erroneous indication. This is so you don’t get distracted or confused by the progressively off-kilter indication of a failed flight instrument.

As a simulator instructor, I learned that the first indication of a failed attitude indicator is a seemingly inexplicable inability to hold heading—we naturally follow the attitude indicator and, as it begins to drift, what looks like wings-level flight is often a turn. If you can’t hold heading and you don’t know why, begin troubleshooting your instruments.

There’s a lot you can do on routine flights to help prepare you to safely fly with instrument failure:

Before an instrument fails, prepare yourself:

• Know how your instruments are powered, and how to operate the backups that exist in the aircraft you’ll fly. Refer to your POH/AFM for the details.

• Know precisely the effect that changes in power, flaps and (as applicable) landing gear position, and pitch attitude have on airspeed and rate of descent or climb. Commit these numbers to memory—and/or write them down and stick them to the panel—to monitor performance when the flight instruments are degraded.

• Faithfully conduct before-takeoff operational checks of your flight instruments, and terminate flight before it starts if an instrument doesn’t pass this inspection.

• Regularly practice partial-panel flight with a safety pilot or flight instructor. The cost of an hour of instruction every six months or so is much less than the expense of adding back-up instrumentation to an airplane, and may be worth much more in an emergency. It may be your only option if you don’t own the airplane.

• Keep sticky notes or some other instrument cover immediately at hand, to cover up a distracting failed instrument or instruments.

Surviving instrument failure in flight, especially at night and/or in instrument meteorological conditions (IMC), is a matter of being ready for the event before it happens—not waiting until the failure occurs to see how good you are. Now you have a checklist…which not only tells you precisely what to do if your attitude indicator fails, but also gives you a procedure you can practice regularly so when it fails, you’ll know what to do. 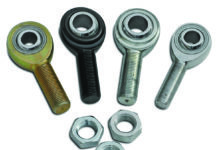 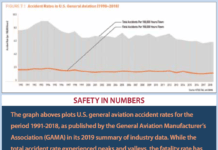 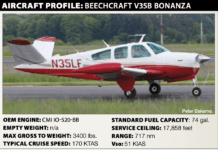