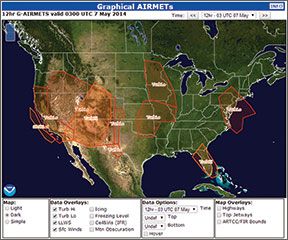 Turn on your faucet—any faucet. Start with just a slow stream of water. See how smooth, transparent it is? That’s an example of laminar flow. Now, accelerate it by opening the taps fully. Notice how it roils, as a brook after a rainstorm. What you see is the essence of turbulence.

Flying through air is essentially the same act as “flying” a submarine through water and—like the oceans—our atmosphere is composed of moving, rising, sinking, swirling molecules of air we call wind. Why? Because, well, we are moving, the earth around the sun, the earth on its axis…you get it. As huge swaths of air heat, rise, swirl, eddy out and sink, weather happens. With any weather, be it clear or cloudy, stable or unstable airmass, there can be turbulence. Take a look at a surface analysis or constant pressure chart. If pressure gradients are strong (isobars close together), you can expect lots of wind and turbulence.

Quantifying and Predicting
You may have seen something like the chart on the opposite page when you were learning to fly. It defines light, moderate, severe and extreme turbulence, and something called “chop” (continuous turbulence). Pilots have been reporting turbulence as light, moderate, severe or extreme for decades, measuring purely by their perception, which is imprecise and subjective. What a Boeing driver perceives as light chop might feel pretty severe for a Bonanza pilot, for example. The information is collated and disseminated by Flight Service in Pireps. You can find them online at Aviationweather.gov and similar sites.

There are other charts, however, that can give you a good indication of where can you encounter turbulence most frequently. You just need to know what to look for. Boundary layers, for instance. Turbulence can be found anywhere that airmasses collide (think cold fronts, warm fronts, occlusions) and anywhere air accelerates, such that it is distinguished from the airmass around it (think jetstreams, cyclones and thunderstorms). Although clouds, such as swirling and washboard high cirrus or cumulonimbus are frequently indicators of turbulence, they are not always there to show you what parcel of air to avoid. Clear air turbulence (CAT) is the invisible bane of those who inhabit the flight levels. You can’t see it, but it can bite you, and hard.

Given what we know about fluid mechanics, air turbulence should not have been a surprise to the first pilots, but there is plenty of evidence in smashed wood, fabric and later, metal to indicate pilots are still struggling to understand and avoid turbulence.

Even today, turbulence can kill, especially when it surprises pilots. Turbulence severely damages at least one commercial jet per year worldwide, and causes aircraft to be taken out of service for inspection after a severe encounter far more often than that. According to FAA data, nearly 60 people a year are injured in the U.S. when airliners encounter unexpected severe turbulence.

The aircraft damage is costly enough that airlines have been working for years with NASA, the National Center for Atmospheric Research (NCAR) and the National Weather Service (NASA), along with private corporations Rockwell-Collins and WSI, among others, to create turbulence detection systems that both continuously report weather conditions aloft to the NWS and attempt to collate and calculate the information it collects in real time to give airline pilots warning of possible turbulence ahead.

The devices, from sophisticated predictive doppler radar to LiDAR (lasers) to on-board temperature, pressure and atmospheric moisture sensors all report back to the airline’s dispatch and the NWS, where the data recorded is used to produce a relatively recent addition to aviation weather’s forecast charts: the Graphical Turbulence Guidance product (GTG, Figure 1 on page 14). It illustrates the NWS prediction of mid-level and upper-level CAT from 10,000 feet to FL 450, with 0-, 1-, 2-, 6-, 9- and 12-hour lead times.

Below 10,000 msl (even below 15,000 in some parts of North America), mechanical interference of the earth and forests and structures with the wind creates much of our turbulence and low-level windshear (also considered turbulence). Thermals create the rest of it.

The good news here is that we have mapped the mountains, cliffs, hills, valleys and canyons, and we have learned through a certain amount of trial and error to predict how wind will react when it hits these bumps, corners and creases.

If the wind is blowing more than 20 knots in a mountainous area, light aircraft pilots might want to rethink their course, or climb. Add 2000 feet for every 10 knots of wind to come up with the altitude at which you’ll plan to cross a ridgeline, and adjust your course so you approach it on a 45-degree angle. That way, it’s a short, quick turn to veer away in case downdrafts grab you and pull you toward the mountain, because even all that altitude does not guarantee you won’t get caught. Remember Steve Fossett? Happens more often than our pilot community would like to admit.

The same goes for flying in steep, narrow valleys and canyons. Wherever you think the wind needs to bend—such as the river bottom in a canyon, a stand of lush, tall trees beside the runway, or large buildings—you can pretty much guess the wind will be churning. At airports similar features, expect to see more than one windsock and expect to see those windsocks occasionally pointing in more than one direction at the same time. These airports are not all backcountry strips, either. The Gnoss Field Airport (KDVO) in Novato, Calif., is famous for winds that barrel down off significant hills, one just to the west of the airport and another to the south. Watch the treetops near the runway, too. If they are dancing and swirling you know that the wind just above and on the approach path is likely to give you some challenge.

Respond with a thoughtful calculation of your airplane’s crosswind and full-power climb capabilities, then inventory your own crosswind and rough-air capabilities, and proceed with a power-on approach. Be ready to jockey the throttle as you encounter gusts, and be primed for a full-power escape from any windshear you encounter. Go-arounds at such an airport are common on gusty days, so the only way you’ll embarrass yourself is potentially by not going around. Forcing the airplane through such a rough approach almost guarantees a rough and possibly dangerous landing. Consider alternatives, such as another airport with fewer mechanical obstacles for the wind to churn around, or with a wider, longer runway, more oriented directly into the wind.

Be a Cloud Reader
The good news is that clouds often advertise the presence of turbulence for us. Get out your old weather primers and study up. You’ll want to know what a rotor cloud looks like, what a “leni” (standing lenticular) looks like, and what mountain wave ripples resemble. Learn the distinctive markers of boundaries of warm and cool air; clouds of fronts and squall lines.

Are you a flatlander? We get our share of bumps, too, but, come summertime, most of them are thermal in nature. Bubbles of hot air rise like the CO2 in a glass of soda as the sun warms the earth in a stable airmass. As the bubbles climb, the atmospheric pressure of the air decreases, allowing them to expand. Moving air currents above the surface push the bubbles, which are sometimes represented as leaning towers of rising air. Fly slowly enough and turn to stay inside the rising bubble, as glider pilots do, and you can hitch a ride at climb rates from 200 fpm to more than 3000 fpm. Fly faster, popping through one bubble after another, and you’ll perceive them as chop, or worse.

The lifted index or K-Index charts (Figure 3 on the opposite page) can give you a good indication of where thermals are predicted to create turbulence. To avoid it, climb and look for smooth air above the top of the lifting zone, usually defined by the top of a haze layer, or above the cumulus clouds marking where the dewpoint and air temperature intersect (also something you can calculate on the ground by knowing the adiabatic lapse rate).

On a day when the cumulus are popping, you won’t be able to outclimb them for long. Once they begin to tower those of us that lurk below the flight levels are doomed to bump, flying through or under the building phalanx of what will soon be afternoon thunderstorms.

Stuck in The Bumpy?
How should you best handle any turbulence at altitude that you can’t avoid? Slow down. Make shallow turns. Your airplane deals with the vertical and horizontal gusts that make turbulence best when flown at or below maneuvering speed (VA), which you’ll find in the POH/AFM and/or on a placard, not on the airspeed indicator. Below maneuvering speed you are less likely to break or bend the airframe in turbulence. Be particularly cognizant of your speeds while descending in turbulence. At the very least, stay out of the yellow zone on your airspeed indicator unless it’s absolutely smooth. Better yet, know VA for your airplane’s weight and stay under it.

And thunderstorms? We don’t mess with them. They are the domain of extreme turbulence, the kind that shreds aircraft, large and small. Circumnavigate them by 20 or 30 miles if they are extreme in nature to avoid the turbulence that can be found even under their anvils. If it is impossible to circumnavigate them, try avoiding them on the upwind side. And if you can’t do that, land and wait out the storms safely on the ground.

While you are landing, be on alert for sudden wind shear associated with the nearby or approaching thunderheads. Approaching roll clouds are excellent indicators that you are in the path of a microburst that can be extremely destructive. These clouds can move at speeds upwards of 60 knots. If you are already on the ground, make sure everything is tied down and seek shelter.

Fly Early, Fly High
Turbulence, in all its forms, is a natural and necessary evil of aviation. It is the great mixer of this cocktail of air we breathe. Without it our atmosphere would stagnate.

Careful preflight planning can help you mitigate or even avoid much of the worst turbulence. Light aircraft pilots are encouraged to fly early in the day, before heat generates thermals or much upslope wind has built in, or in the evening, when air is sinking. All pilots benefit from perusing the charts, from the surface analysis to the progs, the GTG, the LI and winds/temperatures aloft. (A hint here: Look at all the altitudes/winds, so you can see where boundary layers might be.) Any flight planning program or aviation-weather Web site can provide them, in both text and graphic formats.

Planning your flights to avoid the bulk of turbulence isn’t just good pilot-passenger etiquette; it’ll make things generally less stressful for you and your aircraft.