As we reported last month, in late April the FAA released special federal aviation regulation (SFAR) 118, “to enable individuals to continue to exercise their airman certificate privileges during the national emergency” associated with the Covid-19 pandemic. “Without this final rule, certain individuals will not be able to continue exercising privileges in support of essential operations due to their inability to satisfy certain training, recent experience, testing, and checking requirements,” the FAA noted in the SFAR.

At the time, we noted “that the deadline extensions—basically two or three months—may not be long enough, given the uncertainties surrounding the Covid-19 pandemic.” We also reported that it “was unclear whether the SFAR’s deadline extensions may themselves be extended…if conditions warrant.” According to a May 29, 2020, joint letter from seven general aviation trade associations, conditions warrant those additional extensions.

In their letter, the organizations were quick to point out that SFAR 118 has had the intended beneficial impact. “Pilots with medicals nearing expiration have been able to keep flying with low risk to safety, and have been able to retain flight currency to continue operations for the public benefit. These are just a few examples of the successful outcomes for the general and commercial aviation communities and the public because of SFAR 118,” the letter stated.

The organizations are requesting three basic types of relief. First is an additional month of “flexibility for pilots, operators, and certificate holders to comply with certain training, recent experience, testing, and checking requirements provided in SFAR 118,” extending them to July 31. Second is an additional three months, until September 30, “for duration, medical and renewal requirements” in the SFAR. The third request is for the FAA to extend to September 30, 2020, relief “for pilots, operators, and certificate holders who face expiring experience, testing, checking, duration, medical, and renewal requirements in July, August, and September 2020.”

Cessna’s venerable 180, 182 and 185 models are the target of an airworthiness directive (AD) the FAA proposed on May 14, 2020, which “would require inspecting the tailcone and horizontal stabilizer for corrosion and cracks and repairing or replacing damaged parts as necessary.” According to the agency, the AD “was prompted by a report of cracks found in the tailcone and horizontal stabilizer attachment structure.”

The industry’s letter to FAA Associate Administration for Aviation Safety Ali Bahrami expressed gratitude to the FAA for the agency’s quick response to the compliance challenges caused by stay-at-home and other mandates resulting from the pandemic. It noted that, “While many states are lifting stay-at-home mandates, and businesses are beginning to reopen, some restrictions continue to negatively impact general aviation.”

“The aviation community continues to move through an unprecedented and unpredictable period in our nation’s history,” the associations said in the letter. “The nation’s return to unrestricted movement and person-to-person contact is taking longer than expected. While government entities continue to progress through various stages of reopening, additional flexibility will allow airmen and examiners to abide by CDC and individual state recommendations, while stimulating the economy and moving medical and emergency supplies when needed. The current mitigations in SFAR 118 will continue to ensure the safety of these operations during this additional extension.”

“While states and businesses are reopening, we are still far from normal,” said Brian Koester, CAM, NBAA director of flight operations and regulations. “This extension will give pilots and operators an opportunity to meet training and proficiency requirements in a safe manner, and allow pilots to fill critical roles in COVID-19 recovery,” he added. 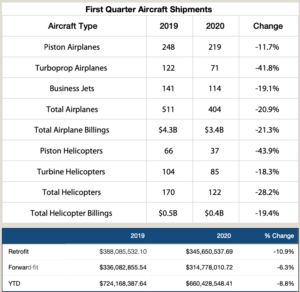 First-quarter 2020 sales figures for new general aviation aircraft and their avionics are in and, to no one’s surprise, they’re not very good. The General Aviation Manufacturers Association (GAMA) and the Aircraft Electronics Association (AEA) both published their industry’s respective sales numbers in May.

“While the year started off strong, the health and safety restrictions put in place to respond to the COVID-19 pandemic began to significantly impact global operations, supply chains and deliveries towards the end of the first quarter. Companies rapidly implemented a wide range of health protocols in accordance with local, regional and national level guidance to keep production, maintenance and training activity churning,” GAMA President and CEO Pete Bunce said in a release announcing the sales figures.

The tables above detail the sales figures published by GAMA (top) and AEA.

The May 22, 2020 crash into a Karachi, Pakistan, residential area of an Airbus A320 operating as Pakistan International Airlines Flight 8303 highlights the need for stabilized landing approaches. According to authorities, the airplane did not descend as expected and reportedly was at 7000 feet when only 10 miles from the intended airport. The accident occurred after an aborted landing attempt and go-around. The flight was maneuvering for a second landing attempt when it crashed, killing 97 of the 99 passengers and crew aboard, and injuring eight on the ground.

The jet’s initial touchdown was without its landing gear extended. Both engine nacelles scraped the runway during the landing attempt, which was followed by the go-around. Apparently, the engines were sufficiently damaged in the event that they both failed before the crew could maneuver back to the airport.