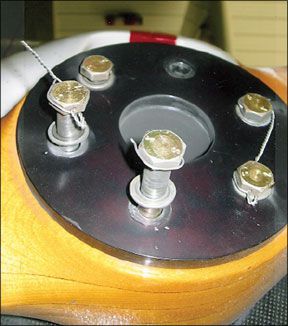 The crew heard a noise when the landing gear was retracted. The left landing gear remained in a partially retracted position, unable to retract or extend. A successful gear-up landing ensued.

The l/h landing gear actuator body (p/n 128101-3) had cracked at the forward mounting bolt hole, allowing the actuator bore to open enough that the piston would not engage the pivot sector gear sufficiently to move the landing gear.

A fuel selector valve (p/n 1908-00-1) was replaced under warranty and operated normally. At 6.8 hours time-in-service, it stuck at each detent. This sticking was so severe that even the force of two hands on the selector valve would not move the valve out of the detent position. The cause was unknown. The valve was removed from service and replaced with a second, new valve, also under warranty. The second valve survived 10.2 hours of operation before it became “sticky.”

Three ECI Revision 3 “E” series cylinders (p/n TISN71.2ACA) cracked behind the fuel injector-between the first and third fin. A compression check with soapy water revealed the cracks, which cannot be seen with the naked eye.

The same mechanic reporting above inspected another engine 12 days later and found its number six cylinder-also an ECI Revision 3 “E” cylinder, p/n TISN71.2ACA-cracked between fins 1-3 behind the fuel injector. It was the sixth such cylinder he found with cracks in the same location.

The pilot of a Piper PA-18-150 refitted with a wooden propeller reported slight vibration. Inspection found one prop bolt had come out forward and through the spinner. The propeller was loose.

After removing the spinner, we found bolt two had backed out about 1/8 inch). Bolts three and four remained safety-wired but not tight. Bolts five and six were backed out approximately one inch, with broken safety wire. Removing the prop required cutting the head off one bolt. Its attachment bushing was found broken off flush with the crankshaft flange.