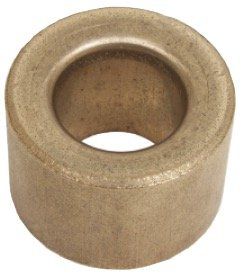 While troubleshooting a failed vacuum pump, removal revealed the drive shaft had melted/burned away, the accessory drive shaft/gear had overheated, the thrust bearing/bushing was galled and the top of housing under the thrust bearing was belled out from excess heat. Magnetos were unaffected. The engine oil and filter were replaced. No metals were noted in the filter material. The manufacturer was notified and supplied replacement parts.

The engine had experienced frequent problems throwing alternator belts. No fix was found. The decision was made to have the engine inspected for defects. Found excessively worn crankshaft counterweight bushings. This is believed to be the reason the alternator belt would not operate properly.

Fuel injector bushings did not remain in place when fuel injectors were removed for cleaning. This engine has 185 hours SMOH and five out of the six bushings loosened with the injector. Probable cause is that Loctite 620 does not reliably hold the bushings in place.

Found damage on shock absorber assembly. Damage caused from the top boss contacting the shaft shock absorber shaft. The bushing was discovered missing on three aircraft at the same flight school. The manufacturer was notified of damage, affected parts replaced and the aircraft was returned to service. The quality/airworthiness department is currently reviewing work orders in an effort to isolate aircraft affected by this missing bushing. All three aircraft with missing bushings had between 1300 and 1400 hours total time.