Any pilot who has used a personal airplane for regular transportation has had to negotiate bad weather. By the time you accumulate more than 4500 hours of flight time, it’s likely you have dealt with a cold front or three, plus night IMC and a variety of other challenges. With that kind of flight experience spread over decades, you might think you’ve seen everything and know when to hold ‘em and when to fold ‘em. But experience can be a double-edged sword: We might well be better equipped to deal with a challenge, but that very confidence may make us complacent.

Our experience might interpret an IFR night flight into frontal weather as a challenge but not beyond our capabilities. And over that time, we’ve probably flown into IMC momentarily without either IFR currency or an appropriate clearance. And we might even think, “Yeah, there’s some weather out there, but I can see it, my destination is only a couple hours away and I’ve flown this route before, so I don’t even need a weather briefing.” There’s a lot going on with that kind of thinking.

I can sort of understand the decision to launch VFR into certain instrument weather at night, at least to take a look. Even though your instrument rating isn’t legally current, it’s “current enough” to get you through what has to be easy weather. It “has to be” easy weather because you’ve done this before and you need to get to your destination. But it’s hard to know what weather you face if you don’t even obtain a pre-flight briefing. By this time, with all these rationalizations, a weather briefing doesn’t matter, because you’re going anyway. It’s called complacency.

On December 20, 2017, at about 1900 Eastern time, a Beech G35 Bonanza was destroyed when it impacted wooded terrain while maneuvering near Cross City, Florida. The solo, instrument-rated commercial pilot (male, 78, 4729 hours) was fatally injured. Night instrument conditions prevailed. No flight plan was filed and no IFR clearance was obtained for the flight from Enterprise, Alabama, to Melbourne, Florida.

Before departing Enterprise at about 1715, the pilot added 27.7 gallons of fuel. By around 1800, the Bonanza had climbed to 7100 feet msl. It then made two left, 360-degree turns, followed by a rapid descent to 1400 feet. It then flew east below 2500 feet and turned south, making S-turns and descending to  1100 feet msl. Around 1849, it flew near a cold front boundary, completing numerous course deviations including three complete left 360-degree turns and two right 360s. The last radar target, at 1900:03, was about 0.4 mile east of the accident site at 450 feet msl.

When he did not arrive at the planned destination, the pilot’s family reported the airplane overdue. The airplane’s wreckage was subsequently located in marshy, wooded terrain two days later.

Evidence at the accident site indicated the airplane descended on about a 45-degree angle over about 50 feet on a magnetic heading of 240. All major components were present. Control continuity was confirmed from the right aileron and the left aileron bellcrank to the mid-cabin area. Ruddervator and ruddervator trim continuity were confirmed from the control surfaces to the control yoke in the cockpit. The pitch trim setting corresponded to a neutral setting.

Both propeller blades exhibited S-bending. One blade had separated from the hub; the other blade also exhibited tip curling, leading edge gouging and chordwise scratches indicative of being under power at impact. The vacuum pump was still attached to the engine and functioned as designed when turned by hand. It was disassembled and exhibited rotational scoring, and its internal vanes were intact.

The landing gear and flaps were retracted. The fuel selector was positioned to the left main fuel tank and the magneto switch was in the “both” position. The attitude indicator’s gyro rotor exhibited rotational scoring, as did the turn and bank coordinator and directional gyro, indicating they were operating at impact.

After removal, both magnetos produced spark at all leads when rotated by an electric drill. No anomalies were noted with any of the pistons or valves. When the propeller was rotated by hand, crankshaft, camshaft and valve train continuity was confirmed and thumb compression was observed on all cylinders. No information could be retrieved from three portable electronic devices recovered from the wreckage.

Weather observed at 1855 about 11 miles southeast of the accident site included wind from 210 degrees at nine knots with gusts to 15 knots, an overcast ceiling at 600 feet and 10 miles of visibility. The surface analysis for 1900 depicted a low pressure system on the central Alabama and Georgia border associated with a frontal wave, with a cold front extending southwest across Alabama and a stationary front extending eastward across Georgia to another low-pressure system in South Carolina, continuing eastward into the Atlantic Ocean.

There was no record of the pilot receiving an official weather briefing from Flight Service or other providers. 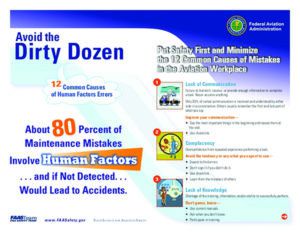 Merriam-Webster defines complacency as “self-satisfaction especially when accompanied by unawareness of actual dangers or deficiencies.” It’s a member of the agency’s so-called “Dirty Dozen” human factors in aviation maintenance.

Overcoming complacency isn’t as well described, though. Adapting some generic tips to aviation, we recommend:

• Having a specific plan.

• Thinking strategically and evaluating your progress.

• Learning from your mistakes and those of others.

• Investing time and money to improve skills and knowledge.

The NTSB determined the probable cause(s) of this accident to include: “The pilot’s improper decision to continue visual flight rules flight into instrument meteorological conditions, which resulted in the pilot experiencing spatial disorientation and a subsequent loss of airplane control.”

According to the NTSB, “Although the pilot held an instrument rating, his most recent simulated instrument experience was about 11 months before the accident and his most recent actual instrument experience was more than 2 years before the accident. The dark night, restricted visibility conditions, and the pilot’s extensive maneuvering in the last 10 minutes of flight, coinciding with the frontal boundary, provided conditions conducive to the development of spatial disorientation. The final path of the airplane in a direction opposite the last radar returns and the airplane’s steep impact angle are consistent with the known effects of spatial disorientation and a subsequent loss of control.”

On one level, this is a classic VFR-into-IMC accident. On another, though, it’s a poster child for experience-bred complacency.