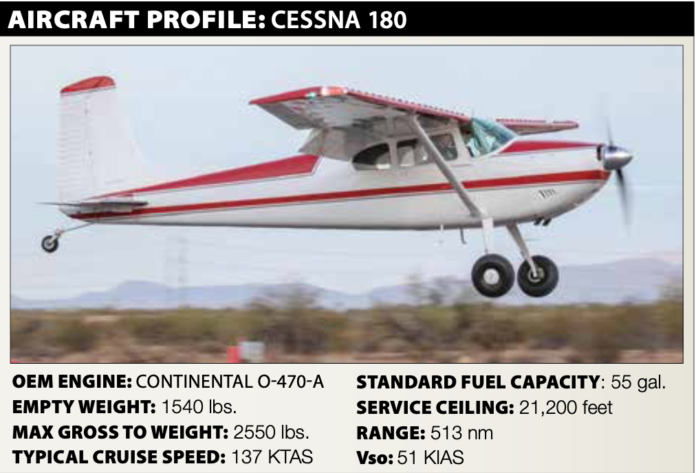 Maneuvering speed is something fledgling airplane pilots learn about early in their training. It’s one of the more important details to know about any airplane because it has implications for structural integrity. It’s also relevant to operating in turbulence and performing maneuvers, although its value isn’t on an airspeed indicator, mainly because it varies with weight.

Maneuvering speed was taught to many pilots as the speed above which rapid, full control movements must not be made. The implication—and one of the lessons many pilots drew—is that rapid, full control movements could be made below that weight-adjusted speed. Then came American Airlines Flight 587, an Airbus A300 that crashed shortly after departing New York’s John F. Kennedy International Airport on November 12, 2001, killing all 260 aboard and five on the ground.

Investigation revealed the Airbus encountered the wake turbulence of a Japan Airlines Boeing 747 that took off less than two minutes earlier from the same runway. To counter the wake turbulence, the Airbus’ first officer and pilot flying made multiple, rapid left and right rudder inputs. This snapped off the jet’s vertical stabilizer and the airplane entered a flat spin from which it did not recover.

The Airbus was below its maneuvering speed when its vertical stabilizer failed, which mystified many pilots, given their understanding of the value’s relationship to structural integrity. What few pilots had considered, however, was that the rapid pulsing of the rudder and the resulting sideslips placed loads on the components well above what their engineering allowed.

The lesson many pilots learned was that flying below maneuvering speed only ensures airframe integrity when a single, full control deflection is made. When rapidly making opposing inputs, all bets are off. Apparently, even with that nuanced understanding of maneuvering speed, some pilots may think it doesn’t apply to them. 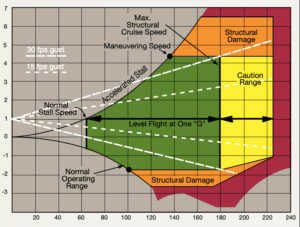 Pilots often talk about “exploring” or staying inside “the envelope.” They’re talking about the Vg diagram at right, which exists for any airplane. The diagram explains the relationship between velocity and G loading, or load factor.

When considering maneuvering speed, it’s important to remember that an aircraft operating below it cannot be damaged by a positive flight load factor in excess of its designed strength. It will stall first. Similarly, combining a gust with abrupt maneuvering also won’t result in damage below that speed. But when we exceed maneuvering speed, which usually isn’t hard to do, an otherwise benign control input coinciding with a gust at the wrong time can combine for an undesired outcome.

On June 1, 2017, at about 1155 Pacific time, a Cessna 180 experienced an in-flight breakup and was destroyed when it impacted terrain near Ventura, Calif. The 52-year-old solo private pilot was fatally injured. Visual conditions existed along the airplane’s route from Santa Paula, Calif.

A witness heard a loud sound, looked up and saw the airplane spinning towards the ground. The engine and both wings had separated from the airplane. Its tail was still attached.

Both wings failed in a manner consistent with a negative overload failure. No corrosion or pre-existing cracks were observed at the spar fractures. The empennage displayed multiple deformations and fractures. Damage to the right stabilizer and elevator were consistent with a significant download that exceeded the capabilities of the structures. The left horizontal stabilizer and elevator likely were damaged by a partial downward failure. All fractured flight control cables had a splayed, broom-strawed appearance, consistent with tension overload, but were intact before the breakup.

The airplane’s weight and balance records were not located. Based on the pilot’s weight, presuming a 55-gallon fuel load and factory information, the airplane would have been several hundred pounds below its maximum gross weight of 2550 pounds and within its CG limits at the time of the accident. The airplane’s published maneuvering speed (VA) was 122 mph (106 knots).

An airplane performance study used radar data to show the airplane was flying steadily in the minutes before the breakup. The airplane gained speed toward the end of the data, with groundspeed increasing from 82 to 127 knots over 67 seconds. The calculated maximum airspeeds were higher than the maneuvering speed.

Weather observed at a sea-level station around the time of the accident about 10 miles southeast of the wreckage included wind from 240 degrees at seven knots, visibility of 10 statute miles and scattered clouds at 2300 feet. No significant weather or turbulence was reported or forecast in the area at the time of the accident, although modeling estimated a high probability of moderate or greater turbulence between 2300 feet msl and 3300 feet msl.

A year earlier, the pilot reported accumulating some 1100 hours of flight time on his medical certificate application, with 50 hours in the preceding six months.

The NTSB determined the probable cause(s) of this accident included: “The pilot’s abrupt and substantial pullup maneuver while flying the airplane above the maneuvering speed, which resulted in an in-flight breakup. The reason for the pilot’s maneuver could not be determined based on the available evidence.”

Without knowing the cruise altitude, it’s hard to dismiss the possibility of the airplane encountering turbulence. But, according to the NTSB, the radar data indicates it’s likely “the pilot performed an abrupt and substantial pull up maneuver, while flying the airplane above maneuvering speed…. It could not be determined why the pilot would suddenly pull up….”

It’s clear from the radar data that it was flying above its maneuvering speed at the time. Whether an abrupt control movement, or movements, or unreported turbulence was the culprit is something we’ll never know. Regardless, it’s clear the airplane came apart when it probably shouldn’t have. And this gives us all another reason, as if we needed it, to heed limitations like maneuvering speeds.