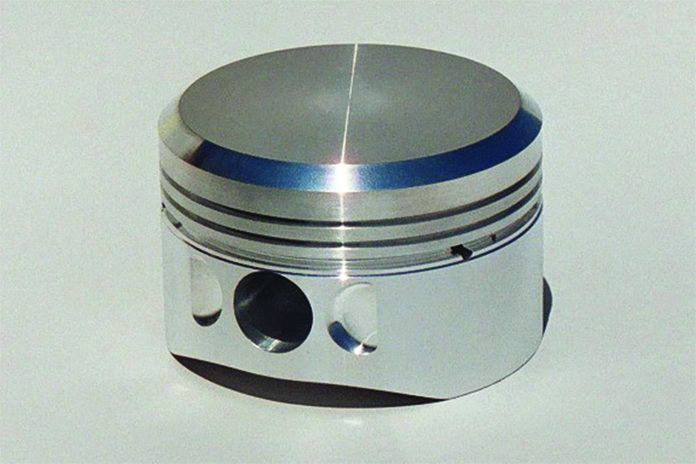 During oil and filter change, chips and large metal pieces were found. Investigation revealed the #2 cylinder’s piston skirt had broken off, including a piston ring, causing severe damage to the cylinder, camshaft, crankshaft, crankcase and connecting rods.

During an annual inspection, the engine oil quick drain valve was blocked with debris. About a dozen pieces of what appeared to be piston ring pieces were removed. The oil filter displayed no visible contamination and an oil sample came back normal. Compression tests results were normal for all six cylinders and the engine produced normal, smooth and acceptable power. The engine was disassembled: three piston skirts were broken, the bottom scraper ring from each broken piston was found in the oil sump.

While performing a condition inspection, a crack was found on #6 intake. The piston was found to have a large part of its skirt missing, plus a broken oil control ring and cracks near the piston pin area. Metal was found in the oil filter.

After takeoff, the crew noted engine vibration and lack of power. Inspection revealed excessive oil in the engine area and on the aircraft belly. Less than three quarts of oil remained. Further inspection revealed a #1 cylinder spark plug had been damaged and was oil fouled. That cylinder had no compression. Removal revealed seized rings and severe piston erosion. Metal particles were noted throughout the cylinder and engine.

After a precautionary landing due to power loss, a compression check showed zero on cylinder A4. The cylinder was found to have excessive carbon build-up, with the top ring stuck and excessive side play clearance. Two other pistons from this engine were in similar condition. The piston is not controlling the amount of oil reaching the top of the piston and carbon build up in the top ring groove results. The excessive carbon causes the ring to stick and the ring ends to flutter. A new-design piston is recommended for this application.