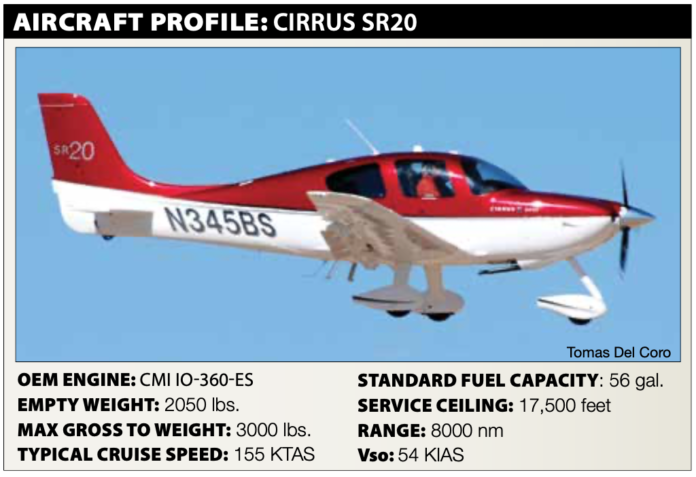 Poor weather has always topped my list of potential aviation hazards. But after earning the instrument rating, I was much more willing to go out and tackle low ceilings and visibility, which inevitably led to poking around thunderstorms and frontal activity. I quickly learned there were no iron-clad rules or procedures for safely penetrating them and that the best strategy was to remain in visual conditions and avoid getting too close.

Every now and then, however, I was sorely tempted to poke through a narrow gap between storms. Invariably, doing so “violated” the FAA’s admonition to remain at least 20 miles away from such weather. But, I rationalized, if I could see through the gaps to blue sky on the other side, how bad could it be?

Pretty bad, it turned out a few times. Along the way, I learned to slow down well below the airplane’s weight-adjusted maneuvering speed, tighten belts and harnesses, disengage the autopilot’s altitude hold mode, and to keep the wings and nose more or less level, accepting altitude excursions.

Finally, I learned that the juice of “shooting the gap” just wasn’t worth the squeeze. The turbulence was just as bad there as it was in cloud. These days, I’ll go way out of my way to avoid similar situations. I’ll also land and secure the airplane, and spend time in the FBO lounge waiting for the weather to pass overhead. Then, in clearing skies and cooler air, I’ll motor off to my destination. (I’m convinced a pilot first coined the old saying “better late than never.”) Shooting the gap can be a good strategy when others aren’t very appetizing, but a better choice is to be on the ground waiting for the storms to go by. 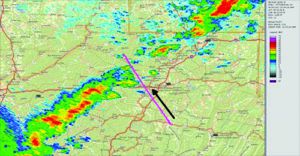 A basic piece of weather information pilots should have before takeoff is whether there are any weather fronts in the area. That’s because, according to an FAA Advisory Circular (AC 00-6B, Aviation Weather), most weather we experience is associated with a front, which the AC defines as the “boundary or transition zone between two air masses. Fronts are classified by which type of air mass (cold or warm) is replacing the other.”

On September 5, 2017, at about 1148 Eastern time, a Cirrus SR20 was destroyed when it collided with terrain in Jacksonburg, W.V. The 72-year-old instrument-rated private pilot and his passenger died. Instrument conditions prevailed at the time of the accident; an IFR flight plan had been filed. The flight originated in Georgetown, Del., destined for Flemingsburg, Ky.

At 1106, the flight checked in with the Clarksburg (W.V.) Tracon, cruising at 7000 feet msl. After requesting and receiving permission to deviate for weather, the flight climbed to 8000 feet. An additional deviation was approved and, at 1142, the pilot reported in the clouds, level at 8000 feet and “almost past” thunderstorms. Shortly, the pilot reported the airplane was in moderate-to-heavy precipitation but declined a vector, saying he was “okay.”

At about 1146, the pilot reported clear of the precipitation and was cleared direct to a nearby VOR. Shortly thereafter, the airplane made a rapid descent from 8000 feet msl to 5000 feet before radar and radio contact were lost. The accident site was located three days later in a densely wooded area about 1500 feet from its last-known radar position.

The wreckage was completely fragmented along the 50-foot-long debris path, with all major components of the airplane identified. All three propeller blades remained attached to the hub and displayed S-bending and chordwise scratches characteristic of being under power at the time of the crash. The Cirrus Airframe Parachute System (CAPS) was not deployed.

The accident pilot received an official weather briefing from Leidos Flight Service at 0825, which included two significant meteorological information documents (Sigmets) for thunderstorms along the proposed route of flight and a surface analysis chart depicting a cold front just west of the accident site. Between the time of the briefing and the accident, the cold front moved east.

The 1153 automated weather observation 21 miles southeast of the accident site at an elevation of 1224 feet included 10 miles’ visibility, thunderstorms in the vicinity, a broken ceiling at 1800 feet agl and other broken layers at 2300 feet agl and 9500 feet.

Among other equipment, the SR20 carried a Garmin 696 and an XM weather receiver. Its flight track depicted the flight in an area of echoes ranging from 30 to 45 dBZ in intensity between 1139 and 1147. These values would have been depicted in yellow and/or red on the Garmin 696’s XM weather display. The pilot reported to the controller that the airplane had exited the precipitation by 1145. There were no echoes located above the accident site at 1147, and there were no lightning flashes or strikes located within 10 miles of the accident flight track between 1139 and 1151.

The image in the sidebar at the bottom of the opposite page is from the NTSB report on this accident. It depicts the weather’s reflectivity for the 0.5-degree elevation scan initiated at 1139, nine minutes before the crash. The airplane’s flight track, as recorded by FAA radar, is shown by the pink line, with the black arrow indicating the direction of travel.

The NTSB determined the probable cause(s) of this accident to include: “The pilot’s loss of airplane control due to spatial disorientation while flying in instrument meteorological conditions in the vicinity of adverse weather conditions.”

In its analysis, the NTSB said, “A cold frontal boundary just west of the accident site provided a moderately unstable environment for the formation of thunderstorms along the route of flight. Review of weather information indicated that the pilot was operating in instrument meteorological conditions and likely turbulence associated with the thunderstorm activity. These conditions are known to be conducive to the development of spatial disorientation.”

The radar image on the opposite page shows the pilot aiming his airplane for a gap in the line of thunderstorms. Other radar images in the NTSB’s file for this accident show the gap slowly closing over the hour preceding the accident. According to the images, the SR20 had already passed through the gap and was on the back side of the storms when the pilot lost control.

At that point, he should have been home free. But apparently the pilot encountered additional turbulence, outside the heavy precipitation depicted on radar. Keeping in mind that radar doesn’t depict turbulence and that in-cockpit Nexrad radar imagery easily can be 20 minutes old by the time it’s displayed, something else was waiting on the back side of the gap. Landing and waiting it out would have been a better choice.