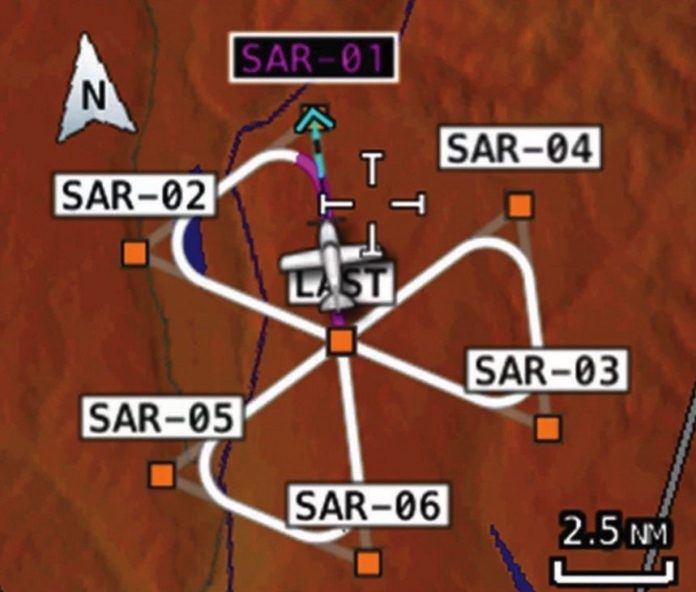 I read Mike Hart’s article “The Transactional Pilot” in April’s issue with much interest, especially regarding his night-flight concerns since I really enjoy night flying in familiar territory; it is those flights over the unfamiliar space that raises concerns. Enter the EFB app and its ability to locate possible emergency sites during the daylight leg(s), by entering those locals as custom or user waypoints.

I tap on a location I observe to be free of obstructions, offering a clear approach corridor and suitable landing surface, and after I get the dot on my app’s chart, I change its “name” to an approach course, e.g., like F17, or G18, and use those designators (you can make up any letter/number you wish), as Field/Approach 170 degrees, or for the other as Grass/Approach 180 degrees. The letters can be for road, crop, highway or water, or whatever looks better—as always, the closer to roads, the better for emergency services access.

You can make up a number of designators with letters and numbers, for say multiple 170-degree locals, just add a vacant number or letter after the ‘17′ or ‘24′, as the case may need. Your app likely won’t let you make multiple points with the same designation, so be creative.

I hope this helps make Mr. Hart’s and other’s flights at night much safer; it sure has made mine more mentally comfortable.

Excellent tip, Paul. Thanks! It might be more cumbersome than using an EFB app, but high-end GPS navigators have similar capabilities.

I appreciated and enjoyed Mike Hart’s story on ag pilots and flying low in the March issue. When I taught ground school for the private certificate and we were learning airspace, I always told my students that the G in Class G airspace stood for “Go ahead and kill yourself.” With the proliferation of cell towers, wind turbines and other obstructions, flying in Class G airspace is like flying through the quills of a porcupine. The only time you should be there in a fixed-wing aircraft is on takeoff and landing—or when doing ag work and trained to do so.

I read with interest Mike Hart’s article on losing control in IMC by non-instrument rated pilots (“Losing Orientation,” February). I was familiar with the “178 seconds” loss of control by VFR pilots entering instrument conditions.

However, that made me wonder if there was any study on how long it takes a competent and current instrument pilot to lose control on partial panel in turbulent IMC? Or perhaps not a loss of control but becoming fatigued. I’m thinking specifically when flying a round gauge airplane with the loss of the only vacuum pump. With the loss of the directional and attitude indicators, pitch and bank must be inferred from the four remaining flight instruments.

In the above situation, an easy remedy is to pull out the turn coordinator and replace it with an electric attitude indicator with maybe a battery backup. Fortunately, the FAA has allowed this since 2003 and it’s spelled out in AC 91-75. We would lose the ability to fly standard rate turns, but just keep the bank at 25 degrees and that will approximate a standard-rate turn at typical GA true airspeeds.

If the airplane has a rate-based autopilot, then the turn coordinator must be retained. This would require moving the TC elsewhere on the panel or installing a smaller diameter AI placed near the forward view of the pilot.

In older G1000 Mooney Ovations and Acclaims, and current Bonanzas and Barons, the backup instruments are placed way to the right of the panel. This requires substantial head gymnastics to include in a scan, which is exactly what we want to avoid when considering spatial disorientation. What to do?

If the right-seater is an instrument pilot, have him or her take over the mechanics of flight. If flying solo, scoot over to the right seat. (It would be preferable to have practiced flying, especially landings, from the right seat with a qualified pilot in the left seat. CFIs may skip this step.) The newer Mooney Ultras now place electronic backups between the G1000 PFD and MFD, a much more preferable placement.

I think a frank discussion on the placement of backup instruments in glass panels might be in order.

Thanks, Luca. As we noted in this month’s Accident Probe on page 24, it’s ironic certification rules require backup flight instruments when a supposedly more-reliable PFD is present but not when steam gauges are energized by a dry vacuum pump. That said, we agree that placement of backup instrumentation in cockpits deserves some serious discussion. Some data also would be useful, but we suspect there are few records of transitions from glass to steam backups.

Mike Berry’s article, “Retractable Landing Gear Systems,” in the April 2019 issue caught my attention because of my recent experience with an in-flight failure of the landing gear motor on my F33A Beech Bonanza. While approaching a nearby airport for cheap fuel on an SVFR clearance, I didn’t hear the normal sound of the gear motor and there were no green lights. As Mike states, “Most of the time…landing gear systems work just fine. When they don’t there’s often a remedy you can apply….”

Recalling the training I received 25 years ago via the Beechcraft Pilot Proficiency Program (BPPP), I cycled the gear switch and then the gear motor circuit breaker, to no avail. That’s when I realized I would need to execute a manual gear extension maneuver, which I fortunately practiced with BPPP. I contacted the tower at my home base, advised them of the situation and began the procedure to lower the landing gear under an 800-foot ceiling.

I recalled step one is to place the gear motor switch in the down position and pull the motor circuit breaker just in case the motor failure was intermittent. Then I had to control the turn while maintaining altitude with my left hand on the yoke while my right hand, reaching behind the pilot seat, executed the 50 turns required to lower and lock the landing gear. Success was confirmed by three green lights. Following an uneventful landing, investigation revealed the failure resulted from excess grease sucked into the motor, causing it to freeze. Redundant systems are important. Make sure you know how to use them.