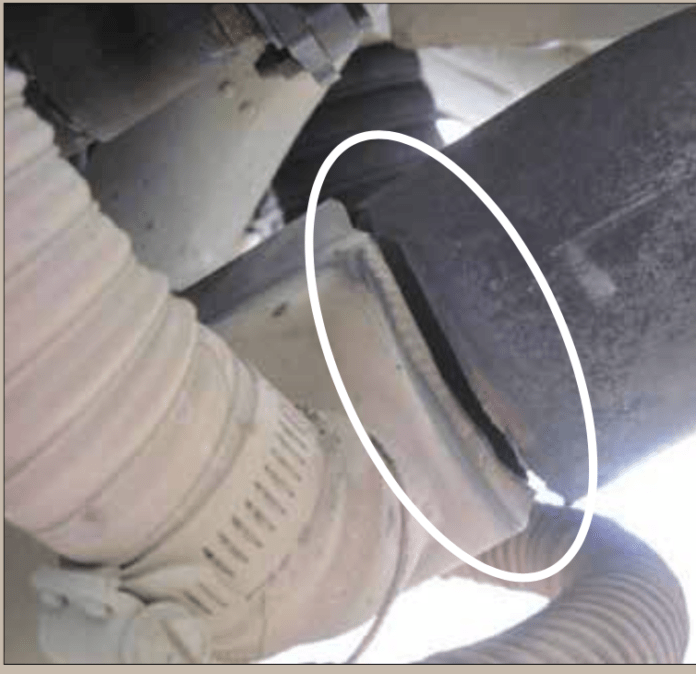 Whether it’s a car, boat, chain saw, motorcycle, lawn mower or airplane, if it’s powered by an internal combustion engine, it has an exhaust system. Unlike those other contrivances, however, a piston-powered aircraft’s exhaust system often can be used to perform other work before the hot, toxic by-products of combustion are jettisoned overboard. Because of that extra work, and because a poorly maintained exhaust system can drastically reduce the engine power available and introduce toxic gases to the passenger compartment, it pays to keep a close eye on the tubing, fasteners and internal components comprising them.

Depending on the aircraft, an exhaust system can look like an afterthought in the engine compartment. It also can conjure a steamfitter’s nightmare, prompting wags to suggest the exhaust system was built first and the airplane assembled around it. Similarly, maintenance and inspection can be easy, cheap and straightforward, or require relatively complicated work in tight spaces soaking up a lot of shop time.

The featured image for the article shown above shows two things pilots should look for during their preflight and other inspections. Just right of the image center, circled in white, a circumferential crack has almost separated the exhaust pipe from what appears to be a muffler/heat exchanger assembly. To the left of the crack is telltale tan discoloration; the worm clamp shows such evidence, as does the clamped tubing. The clamp normally is a bright, shiny metallic color while the hose likely should be made of red silicone. Exhaust blow-by like this has been going on for a while; these components didn’t get that way overnight.

Aside from the inefficiency and lack of airworthiness, the hot exhaust gases spewing from the crack have the potential to damage everything they blow on. Depending on the aircraft, that can include wiring and other hoses, perhaps some carrying fuel or oil and not as resilient as the one depicted. The main thing you should take away from this image is the discoloration. Whenever you see it, there’s an exhaust leak.

In the something-for-nothing category, at least as far as piston-powered aircraft are concerned, exhaust systems are close to the top. The hot gases generated by burning all that dinosaur juice can be used to warm the cabin and/or the carburetor, thanks to a simple heat-exchanging design extracting some of that energy from the exhaust before it’s dumped overboard.

Carbureted engines typically route some of that heated air to the carburetor to help melt carb ice or prevent it from forming. But even fuel-injected engines, which lack a carburetor, depend on heat from the exhaust to warm the cabin. That simple system can and does develop leaks, which not only lead to inefficiencies but also can route deadly carbon monoxide to the passengers.

Exhaust systems—manifolds, collectors, mufflers, heat muffs and tailpipes—typically are welded together in jigs from high-temperature alloys like Inconel and require special equipment to fabricate and repair. It’s a rare local maintenance facility that has this equipment, but the specialized shops are quite adept at the tasks and paperwork involved.

Because the energy in an engine’s exhaust often goes to waste, engineers long ago figured out ways to plumb in a small gas turbine, spin it with the passing exhaust, and use it to compress ambient air, which is then routed to the intake system to boost manifold pressure. The turbocharger was born, and in modern installations can help provide sea-level power well into the flight levels.

Turbocharging—or turbonormalizing, depending on the installation—definitely should be considered a major part of an engine’s exhaust system, and introduces several new components subject to exhaust heat. They can include the turbocharger itself, a manual or automatic wastegate to meter the turbo’s output, oil lines and sensors, an optional intercooler and of course, more tubing to route the compressed air to the engine’s intake. In other words, a turbocharger greatly complicates an aircraft’s exhaust system. 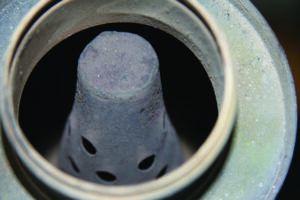 At top right, the image shows the interior of an aircraft engine muffler and the flame cone they typically contain. The flame cone is bathed in hot exhaust gases and typically is the first system component to wear out. Pieces of the flame cone in extreme cases can block the downstream end of the muffler, restricting power. Although encased in the muffler/heat exchanger itself, they can easily be inspected by shining a light up from the tail end of the exhaust or with a borescope. This image is looking downstream from the engine end toward the tailpipe. 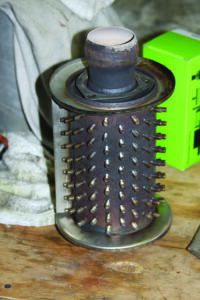 The image at bottom right shows a muffler/heat exchanger with its shroud removed. Of interest are the threaded rod sections welded to the muffler. For both cabin and carburetor heat, fresh air is ducted through this assembly—remember, it’s shrouded when installed—and the warmer air is then routed to where it’s needed, usually via a flexible, heat-resistant hose. Any leaks in the inner cylinder to which the rod sections are attached can and likely will allow exhaust gas, containing carbon monoxide, to enter the passenger compartment via the cabin heat system.

In addition to inspecting the exhaust risers where they attach to each engine cylinder for both cracks and fastener integrity, preflighting the exhaust system is fairly straightforward. You’re looking for cracks and signs of escaping exhaust gases, as depicted on the opposite page, and you’re checking the fresh- and heated-air hoses attached to the heat exchanger for security and overall condition. A diligent inspection will include those hoses routing heated air to the carburetor, if any, and to the cabin.

It’s also a good idea to at least glance at the interior of the exhaust pipes from below to ensure they display the tan coloration shown on the opposite page and not an oily, sooty residue. If the latter, the engine may be burning oil. Gently wiggling the exhaust pipes to ensure their security is also part of a thorough exhaust system preflight inspection.

A Tale Of Two Engine Failures