I don’t have to go very far out on a limb to suggest the multi-probe engine monitor has revolutionized how we manage piston powerplants. Gone are the days when we depended on a gauge system borrowed from a ’37 Buick to know one or two temperatures. Now, we can see at a glance how each cylinder is doing or which spark plug isn’t sparking. The little black boxes also typically store the data they collect for later retrieval and analysis. Try that with your ’37 Buick.

But an engine monitor can do much more than help us lean the mixture. With a little ingenuity and button pushing, pilots can diagnose a rough-running engine down to the cylinder, magneto and spark plug, or confidently tell the mechanic which fuel injector needs cleaning. While the latest devices offer color coding and keep track of many more parameters than just cylinder heat temperature (CHT) or exhaust gas temperature (EGT), even a basic device can provide detailed information you never knew you had.

For example, in the run-up block prior to takeoff, we typically depend on a drop in rpm to verify individual magnetos are working, along with the carburetor heat system and even a constant-speed propeller. But presence—or absence—of an rpm drop can only tell us a limited number of things. If the engine stumbles on a single mag, for example, we’ll know which magneto it is, but we can’t tell if the problem is with the mag itself or with one or more spark plugs. An engine monitor makes this a cinch. There are a couple of things to look for.

When a healthy engine is switched to one magneto, the monitor should display a relatively uniform rise in EGTs across all cylinders. That’s because only one of the two spark plugs in each cylinder is firing, which results in a less-complete combustion event—the same reason rpm drops—and hotter exhaust, reflected in EGT. If there’s no rise in EGT, it’s likely here’s no rpm drop, either, pointing to something wrong with that side of the ignition system.

Another possible outcome of a mag check is the EGT values from one or more cylinders becoming erratic or dropping out completely. This condition often is accompanied by a somewhat rough engine, but not necessarily an excessive rpm drop. The culprit likely is one or more bad spark plugs, but the solution also could involve the ignition harness and/or a bad magneto. It should go without saying that a lack of rpm drop accompanied by steady EGT values during a mag check means there’s a problem, perhaps with a broken P-lead. In any event, indications other than each cylinder indicating rising EGT accompanied by an rpm drop and smooth running is cause for investigation. The solution could be as simple as a fouled spark plug on the offending cylinder powered by the magneto in use.

But the run-up block isn’t the only time a magneto check can gauge the health of our engine and its ignition system—in-flight magneto checks offer more of a stress-test than on the ground. Yes, you can do a mag check while airborne, even if everything appears normal. Some suggestions come to mind.

First, don’t do an in-flight mag check at full power. Instead, use no more than 65 percent, to reduce engine stress. Second, do the in-flight mag check over a longer duration than you might during a run-up, maybe for 15 to 20 seconds, allowing things to stabilize and for any weakness to show up. As with a run-up mag check, EGTs should rise more or less uniformly and the engine should run smoothly on either mag. If it doesn’t, you should see some additional evidence on the engine monitor, perhaps with an abnormal EGT value or two.

Third, doing an in-flight mag check while running the engine lean-of-peak (LOP) EGT is perhaps the ultimate ignition-system stress test. That’s because a LOP mixture is more difficult to ignite than rich-of-peak (ROP). If the engine passes this test, you can be pretty sure you don’t have any ignition-related engine problems. If it doesn’t, note which cylinder/mag/plug is the offender and check it on the ground.

Finally, and this is important: If the engine quits while doing an in-flight magneto check, whether LOP of ROP, do not immediately switch the mags back to the “both” position, no matter how tempting it is. Doing so could cause a damaging backfire due to raw fuel accumulation. Instead, move the mixture control to idle cut-off first, and then switch the mags back to “both.” Smoothly return the mixture control to at least as rich as it was before the check. The engine should start making power immediately, and you then can lean it as it was before. But if it quits, know that something likely is wrong with that magneto, and you should get it looked at.

While we’re talking about leaning, an engine monitor incorporating a fuel flow sensor—and the resulting data stream with which to plot and graph later along with the other parameters—is another valuable tool. The accuracy of a fuel-flow sensor and the data it produces is much better than the mechanical and pressure-based instruments that likely came with your airplane.

In fact, many engine monitors are designed to take the place of an airplane’s factory gauges and can legally replace several or all of them. Replacing the traditional fuel-flow gauge with an electronic one eliminates the need to run a capillary line to the panel-mounted instrument and the possibility of raw fuel leaking into the cabin should it fail. Fuel-flow instrumentation, thanks to its accuracy, is far and away a better fuel management tool than the equipment with which many of the airplanes we fly today left their factories.

Accurately tracking fuel flow in real time is a valuable engine instrument in itself. If you’ve set fuel flow to, say, 13.0 gph and it later changes to 13.5, there’s something going on. It could be as simple as a creeping mixture control or as serious as a fuel leak. 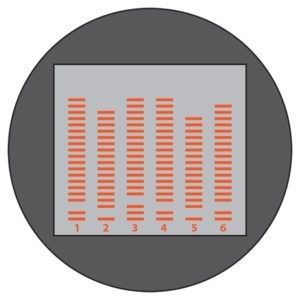 One of the challenges pilots can have with engine monitors is recognizing and understanding abnormal indications. We’re not going to resolve that problem here, but we are going to offer a couple of examples that can provide an idea of how an engine monitor’s display can be used for diagnosis. 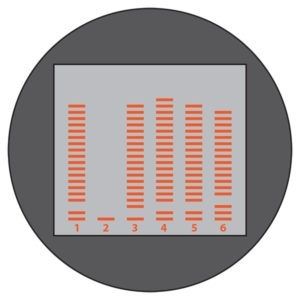 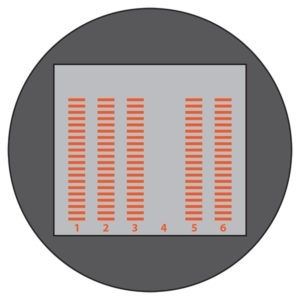 First, it’s important to understand the typical display, which is a stacked series of horizontal bars representing each cylinder, as reflected in the diagrams at right. (Some later monitors present a solid, color-coded bar, one for EGT and another for CHT.) Gaps low in the stack of horizontal bars represent CHT while the remainder of each column shows EGT. The number at the bottom of each column designates the cylinder. Most monitors also display numeric values and cycle through them during normal operation.

The monitor labeled A displays nominal EGTs but cylinder #3 exhibits elevated CHT. That may or may not be a problem, but it’s important to recognize it for what it is. Monitor B shows no EGT and a cooling CHT for the #2 cylinder, which can indicate a clogged injector. The monitor labeled C shows what could be a simple or more serious problem. Obviously, there’s no EGT or CHT data for the #4 cylinder. The simple reason would be a bad wiring harness or bad probes. A more serious reason would be a stuck valve on that cylinder. If so, it’s highly likely the engine would be running rough. These examples are just that: examples. Your mileage may vary.

Monitoring and using EGT to manage your piston engine goes hand-in-hand with keeping a close eye on CHTs. As we’ve argued in the past, keeping cylinders cool is critical to extending their lives and minimizing repair or replacement. A modern engine monitor allows us to set alarms for various parameters—if a certain value is exceeded, the monitor will start flashing or even send a message via the airplane’s audio system. That’s especially important with CHTs.

Hot CHTs across all cylinders means you’ve either mismanaged the mixture control or failed to open the cowl flaps. A single CHT hotter than the rest could mean something relatively simple like a problem with the cooling baffles, or perhaps a partially clogged injector, depending on the mixture setting.

Much more serious would be preignition or detonation, which likely would be indicated by slightly higher EGT on the affected cylinder. Its rapidly rising CHT almost assuredly will trigger the instrument’s alarm and eventually be accompanied by a very rough-running engine, along with other indications like elevated oil temperature and reduced oil pressure. There are several causes for preignition or detonation, but the likely cure is cylinder repair.