A common problem students and rusty pilots may have with their landings involves floating down the runway, waiting for the airplane to quit flying. We’re often tempted to force it onto the runway, which can result in all kinds of mischief, including landing on the nosewheel of a tricycle-gear airplane. That’s bad, since the nosewheel isn’t designed for it, and a prop strike can occur in extreme situations.

Forcing the airplane onto the runway also can result in one or more bounces, often with increasing amplitude, leading to loss of control. You also can eat up a lot of runway while waiting for the touchdown, and may not have enough left to roll out and stop. Excessive floating right above the runway generally results from flying a too-fast final approach. It should be obvious, then, that slowing down on final is one way to fix your float. But arriving over the runway at the proper speed requires some planning, which typically should begin in the traffic pattern.

During your primary training, you likely spent a lot of time flying traffic patterns. That work typically would consist of pulling off power abeam the numbers on downwind, then adding a notch of flaps. On base, you pull another notch of flaps and adjust pitch and power for the desired descent rate. Once you turn final, you add full flaps and again adjust pitch and power to find the desired sight picture and monitor what we hope is a stable glide to the touchdown zone.

Each trip around the pattern is different; the winds may change, you may extend your downwind for straight-in traffic, you may be in a hurry thanks to faster traffic behind you. But the one constant in it all is you want to arrive over the touchdown aiming point on-speed and just above the runway. To be on-speed down the final, you have to have configured the airplane for landing and be established on a stable glide to the runway, with power, pitch and airspeed all within nominal values.

We’ve yet to see even a basic type-specific flight manual that doesn’t have a recommended final approach speed. The thing is, many manufacturers publish a range value, perhaps only specifying a single speed for a short-field approach. One reason for publishing an airspeed range is to account for possible differences in aircraft weight; another may be to pad the airspeed a bit to build in a gust margin. And one outcome of always flying the approach at the upper end of such an airspeed range can be undesired floating.

Consider instead a slow deceleration down the final—from 80 or so KIAS to 65 or so—with appropriate pitch and power adjustments to maintain the desired glidepath to the aiming point. Your goal would be to arrive at the aiming point a couple of feet above the runway, in a nose-up attitude and at the desired airspeed.

The phrase “desired airspeed” is doing a lot of work here. If you’re consistently arriving over the touchdown point at the lower end of the published approach airspeed range and still floating, use the speed for short-field approaches instead.

Why Ground Effect May Be (At Least Part Of) The Problem 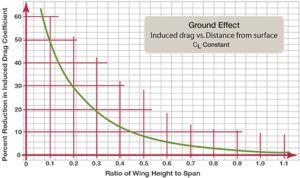 The FAA’s Airplane Flying Handbook (FAA-H-8083-3B) defines ground effect as a “condition of improved performance encountered when an airplane is operating very close to the ground. When an airplane’s wing is under the influence of ground effect, there is a reduction in upwash, downwash, and wingtip vortices. As a result of the reduced wingtip vortices, induced drag is reduced.” Reducing induced drag will  inhibit an airplane’s natural tendency to decelerate when power is reduced or eliminated, like when trying to flare close to a runway.

A “cure” when ground effect contributes to your float is to be on-speed and at idle power, with the nose up for maximum deceleration.

One reason determining the “desired airspeed” can be like nailing Jell-O to a wall is that some airplanes will have a tendency to float. Low-wing airplanes can be especially susceptible to floating since the wing’s close proximity to the runway exacerbates ground effect, as discussed in the sidebar above. A high-wing airplane with a similar configuration at the same weight may not want to float as much as the low-wing version for this simple reason. But that only means you need to be a bit slower, not climb into a high-wing airplane.

Relatively light operating weight also can induce floating above the runway. That’s at least in part because many of the “book” numbers are generated for maximum gross weight, which can’t happen by definition. When flying at light weights, feel free to shave a couple of knots off the published final approach speed. In fact, the manufacturer’s data for a high-performance single with which we’re familiar includes a range of speeds, based on aircraft weight, for 70 KIAS at max gross, dropping down to 59 KIAS when basically just a pilot and an hour’s worth of fuel is aboard.

When in doubt, start with the old standard 1.3 times VSO (landing-configuration stall speed). Again, keep in mind that the published VSO may also be for max gross weight, and still may be too fast. If so, use 1.2 times VSO, typically thought of as a short-field approach speed.

Something else to keep in mind, especially when flying a certified (i.e., non-experimental) piston single is that, by regulation, gross-weight VSO normally can’t be higher than 61 KIAS. Multiplying 61 by 1.3 gets us 79.3 knots, which seems way too fast to us as a speed to begin a flare. Meanwhile, 1.2 times 62 is 73.2, which is a more realistic speed to consider. Obviously, when VSO is lower than 61, as it most often is, you’ll want to be slower, too.

The published short-field approach speed for a Cessna 172S Skyhawk SP is 61 KIAS, which pencils out to 1.5 knots below 1.3 times its VSO at gross, or 48 KIAS. Especially if floating is a concern, we’d be comfortable using 55 KIAS as our target speed at the flare.

One way to look at your airspeed planning is to have a target speed for crossing the “fence”—maybe 10 knots above 1.2 VSO at 50 feet agl—and bleed that off by smoothly reducing power to idle as you apply back pressure to keep the nose up and enter the flare. Manage the power reduction and pitch to wind up a couple of feet above the runway and at 10 percent of VSO as you begin to flare. For most of the airplanes we fly, there won’t be much float to worry about at idle power.