My first flight instructor’s words from decades ago are stuck with me: “Glide, grass, gas,” he said, and then repeated it. “Glide, grass, gas.” He was talking about engine failures, and these three little words are a nice mental checklist for what to do when the engine of a single-engine airplane stops. Glide: Fly at the airplane’s “best glide” speed. Grass: Pick a place to land. Gas: Try to get the engine restarted.

I’ve never had to use Tom’s advice, but I still use his words when I teach my students what to do if an engine fails. “Glide, grass, gas, Steve,” I say, and repeat, “Glide, grass, gas.” If you come to me for a flight review, we’ll review it on the ground and, of course, in the air.

The words and the concepts described are simple. But the “glide” portion isn’t. Let’s look at some of the details of gliding.

Most pilots and instructors think about the physics of flight in terms of the four forces: lift, drag, thrust and weight. Taking away the engine means taking away thrust, leaving lift, drag and weight. Pilots generally have little or no control over weight when the engine fails. Lift and drag interdependently share a lot of factors. Both depend on some kind of area, that of the wing for lift, and that of the whole forward-facing part of the aircraft for drag. These are hard to change. Air density, which is harder to change, also is a factor. The last factor is airspeed—to be technical, the square of the speed—and that is easy to change. That’s why instructors and manuals talk about speed control when an engine fails, using the term “best glide speed.”

Flying at best glide speed sounds easy, but setting a particular speed is actually pretty difficult. What a pilot can do is set the best glide attitude. Concentrating on attitude rather than speed lets a pilot look out the window to find a place to land while simultaneously setting the airplane up for maximum performance. If the attitude is right, the speed will take care of itself and be correct pretty quickly. As they say, attitude + power = performance.

Pilots are taught to find the best glide attitude backwards, if at all, by looking for best glide speed. I’d rather look out the window than at the airspeed indicator.

Another way to think about the physics of flight is in terms of what I call essence, after the French word for fuel (see my article, “The Essence Of Flight,” in the July 2021 issue). Essence is a combination of various forms of energy, usually including height (physicists say “potential energy”), speed (“kinetic energy”), fuel (“chemical energy”) and the pilot’s physical and psychological status. A hungry or scared or unprepared pilot can waste a lot of energy.

In an emergency like this, fuel is irrelevant and the pilot’s psychological status is probably weak. Height and speed give the pilot more time to think, but until then the three little words, “glide, grass, gas,” are a big help.

The French word for wing efficiency is finesse. Most pilots want to handle the problems of flying with finesse. Pilots want smooth flights so passengers stay calm, and pilots want smooth procedures, so they stay calm themselves. The opposite—hands flying around the cockpit, loose stuff flying around the cabin, the craft stumbling through the sky—is not fun. It’s wasted energy, wasted essence. Wasted essence means wasted glide performance. 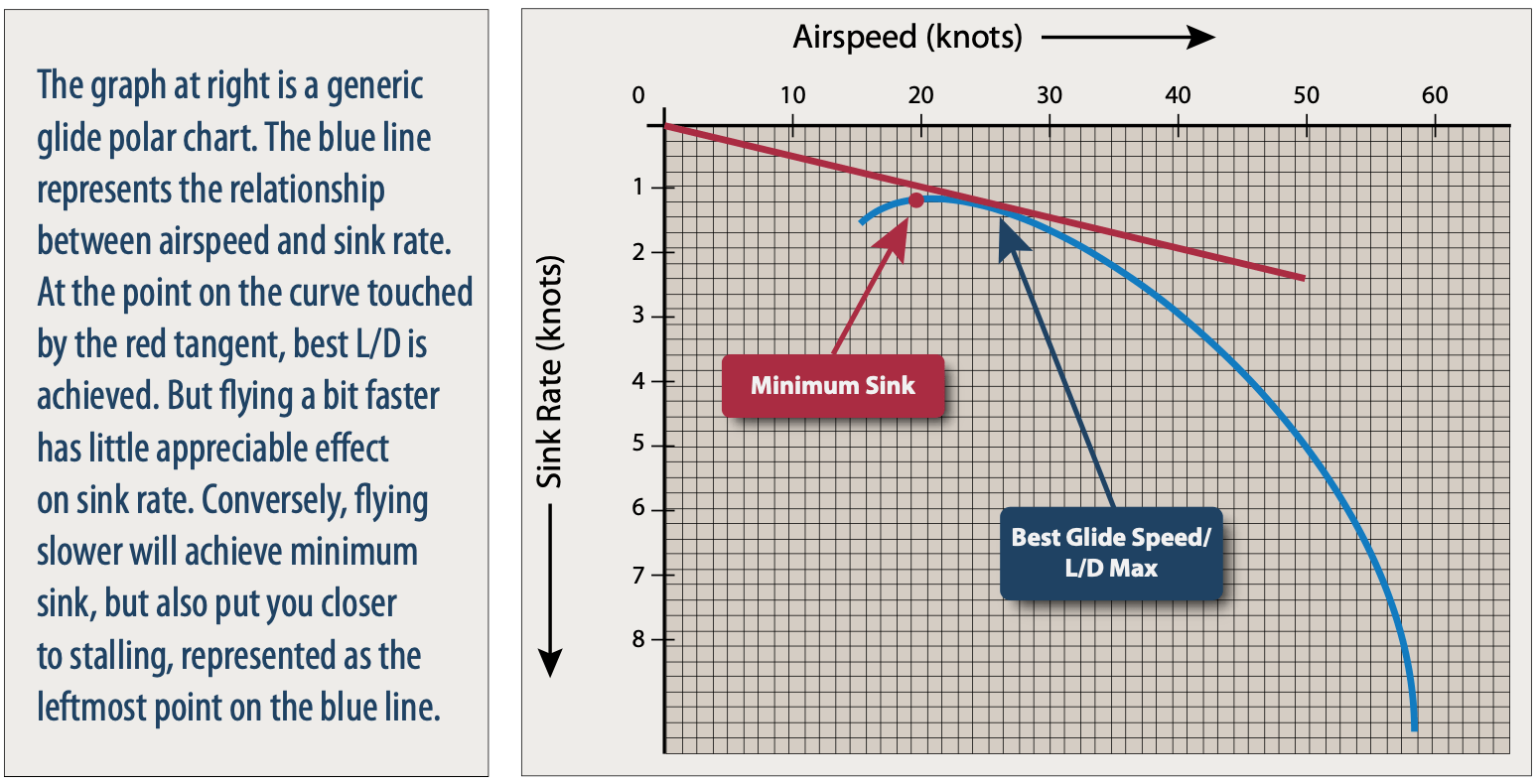 Some pilot operating handbooks, like those for Cessna singles, actually show the attitude for maximum finesse on the glide performance graph, but they don’t label it as such. One thing you could do sometime when just flyin’ around is bring the throttle back to idle and get stabilized at the published best glide speed. Look at the attitude indicator to see how far down the nose is. With steam gauges, you can probably measure this within a couple of degrees; with a modern PFD, you can probably do better. An angle-of-attack indicator would help you nail it.

Or you can go with a good, time-honored rule-of-thumb for most singles: the L/D attitude is a couple of degrees nose down. A couple of degrees? Shouldn’t we be more precise? After all, the best glide speed in the book is specified to the nearest knot. How many degrees is that?

But the accuracy doesn’t matter! The reason is something that glider pilots learn when studying “polars,” the glider equivalent of a power curve. (Gliders don’t have power curves.) Looking at the polar, a generic example of which is presented above, you can see that if an airplane is gliding at a slightly faster speed than optimal, its performance doesn’t change much, so pitching nose down a little (not nose up, like many pilots try) gets things moving in the right direction with very little penalty. But gliding at a slightly slower speed than optimal really hurts performance. The best speed depends on aircraft weight, and pilot operating handbooks get away with showing just the speed at maximum gross weight, because being a little fast doesn’t hurt performance much.

Set a reasonable attitude and the finesse will be close to its maximum. This only takes a couple of seconds. That’s the “glide” part of “glide, grass, gas.” Next focus on “grass,” by picking a landing spot and turning toward it. Once that is done, go back and fine tune the airspeed. 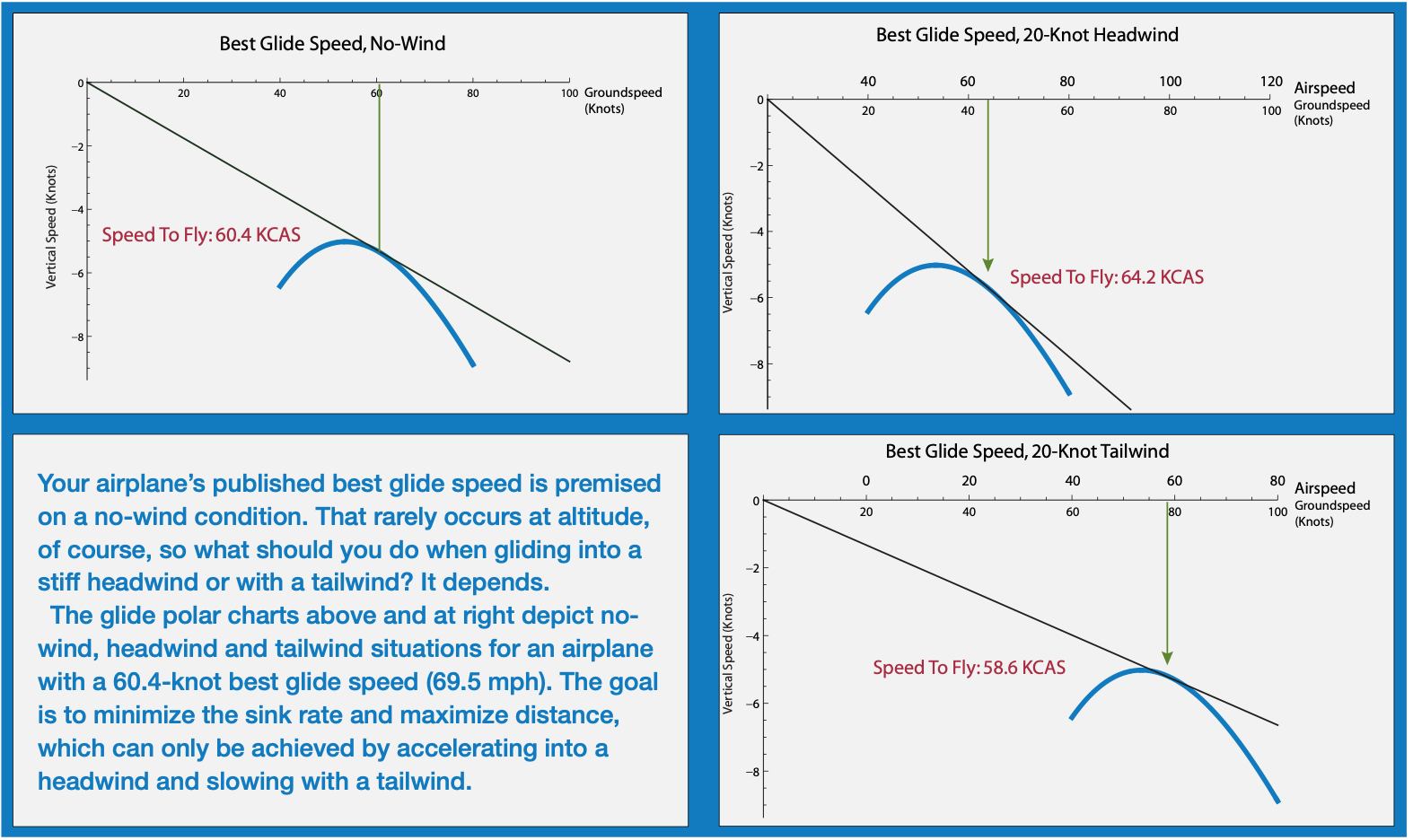 So, a Cessna 172 with an L/D of about nine at 65 knots should be descending at about seven knots, a King Air with a glide ratio of about 12 at 135 knots should be descending at about 11 knots, etc. These are approximations, because the true airspeed is higher at altitude, but they can help. Using best vertical speed means that in a Cessna 172, each 2000 feet of additional altitude means almost three minutes of additional glide. That’s three more minutes of trying to get the engine going or making a radio call declaring an emergency. Everyone says higher is better, but the concept of finesse tells you how much better.

If the airplane is flying at best glide speed and the descent rate is higher than expected, check if it is flying coordinated and that there is nothing causing drag, such as landing gear, flaps, cowl flaps or whatever device is present. If you’re flying a constant-speed propeller, pull it to the high-pitch/low-rpm setting to minimize drag.

What about glide angle? Every FAA knowledge test includes questions about the Rule of 60: a track error of one degree for 60 miles puts the aircraft about one mile off course. This means that if you divide 60 by the glide ratio, you get the glide angle. This is most useful in setting up a three-degree glideslope, which is a 60-to-3 or, more usefully, a 20-to-1 ratio. This leads to those two useful rules of thumb: a three-degree glide is 300 feet per nautical mile, and the vertical speed should be five times the groundspeed (ignoring decimal points). Thus, it shouldn’t come as a surprise that flying a three-degree glideslope at 120 knots groundspeed results in roughly a 600-fpm descent.

Finesse In The Cockpit 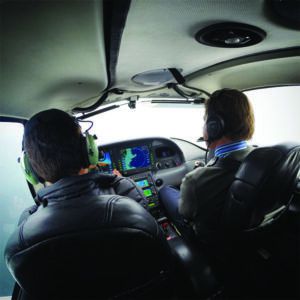 What’s happening in the cockpit? Finesse, that is, moving carefully and smoothly, and stopping to think, is the goal, not hands flying around the cockpit and shouts on the radio. That’s a waste of energy, a waste of essence, and can only make things worse. The Five Hazardous Attitudes described in the FAA’s Pilot’s Handbook of Aeronautical Knowledge (FAA-H-8083-25B) include impulsivity, the feeling that you must do something right now, and that’s a dangerous attitude. Finesse is safer.

But be honest. That’s not what’s going to happen in an emergency. I’ve been startled every time I’ve heard a loud bang in an airplane, and you’ve been startled, too, if you’ve ever heard one.

In most cases, the best thing to do is nothing (see the article, “Take A Minute,” in the August 2021 issue). In rare situations, like an engine failure in a Robinson R-22, or depressurization at high altitude, the pilot needs to do something right now (start an autorotation or put on an oxygen mask, respectively), but in most cases the aircraft is still flying, so fly it.

Glide ratio is a measure of performance through the air, but what a powerless pilot really wants is performance relative to the ground. Take a Cessna 172 gliding at 65 knots and descending at seven knots. If the 172 has a 10-knot tailwind, the groundspeed would be 75 knots but the descent rate would still be seven knots, so the glide ratio jumps from nine to 11. If the 172 has a 10-knot headwind the groundspeed becomes 55 knots, and the glide ratio decreases to eight. Airplanes glide further going downwind.

That introduces another problem. The wind on the surface is probably (but not always, if there is wind shear) blowing in about the same direction as the wind at altitude, and it is much better to land into the wind. (The FAA’s Airplane Flying Handbook, FAA-H-8083-3B, Chapter 17, has an excellent discussion of factors that affect touchdown and survivability.) So the pilot must fly a pattern around the landing site, using 1000 feet of altitude or more. Commercial pilots know a pattern is possible because a 180-degree power-off landing is part of the Airman Certification Standards. So, always try to pick a field that you can reach from at least 1000 feet agl.

Every movement of the controls costs a little bit of essence. The pilot must turn the aircraft toward the landing spot, so move the controls smoothly to get that done. Make a coordinated turn, because sideslips harm glide performance.

If you reach the landing spot too high, congratulations. Use whatever drag you have available to lose some extra altitude, including a slip. A slip is better because you can control how much extra drag it produces.

For a crosswind landing, a crab is better than a slip. While it costs a little essence to start and end a crab, a sideslip steals finesse and essence the whole time it is used, so use the crab technique until you’re about to touchdown.

Thinking about essence and finesse gives interesting insight into the glide. Once the attitude is set, the speed will be about right (this is basic airmanship), and the glide ratio determines the vertical speed as well. Pick a spot and watch it move down along the windshield, and you will arrive, high and safe.