According to the NTSB, “between 2001 and 2011, over 40 percent of fixed wing GA fatal accidents occurred because pilots lost control of their airplanes.” The National Business Aviation Association adds that NTSB’s more recent numbers show 46.4 percent of all fatal accidents in the U.S. from 2014 to 2018 were attributed to loss of control in-flight (LOC-I). That makes it the number one cause of fatal accidents. The AOPA Air Safety Institute’s most recent Nall Report, which looked at accident occurring in 2009 through 2018, confirms the prevalence of LOC-I in pilot-related accidents, especially during takeoff and landing.

In this magazine’s March 2019 issue, Robert Wright’s article, “Why We Lose Control,” looked at the risk management-related reasons behind LOC-I accidents. He made an excellent case for the proposition that poor risk management is a root cause of LOC-I accidents, aided and abetted by poor stick-and-rudder skills. Put another way, the fact that the pilot put him/herself into a situation where LOC-I happened is poor risk management. That the airplane got out of control is an airmanship issue. Given the industry’s relative success in reducing many other accident types, why do LOC-I accidents continue to remain statistically unchanged? Maybe it’s because of some bad habits.

An accepted definition of “habit” is “routine behavior that is repeated regularly and tends to occur subconsciously.” When we get in a car and drive off, we don’t need to think about the separate actions of buckling a seat belt, turning on the ignition, putting the car in gear, checking the mirrors and blind spot, and pressing the gas pedal. All of these actions have become long-time habits, and we perform them automatically.

Flying tasks, like those of driving, eventually become a habit formed by repetition. First-learned habits become “keystones,” influencing how we perform other habits. Flying habits, like others, are cued by the context in which they are formed. Once formed, context automatically calls up the habitual response.

With that in mind, maybe we’re forming the wrong habits? Could the problem be in the way we teach ab initio flying, the first-learned, keystone habits we all fall back on in moments of stress? 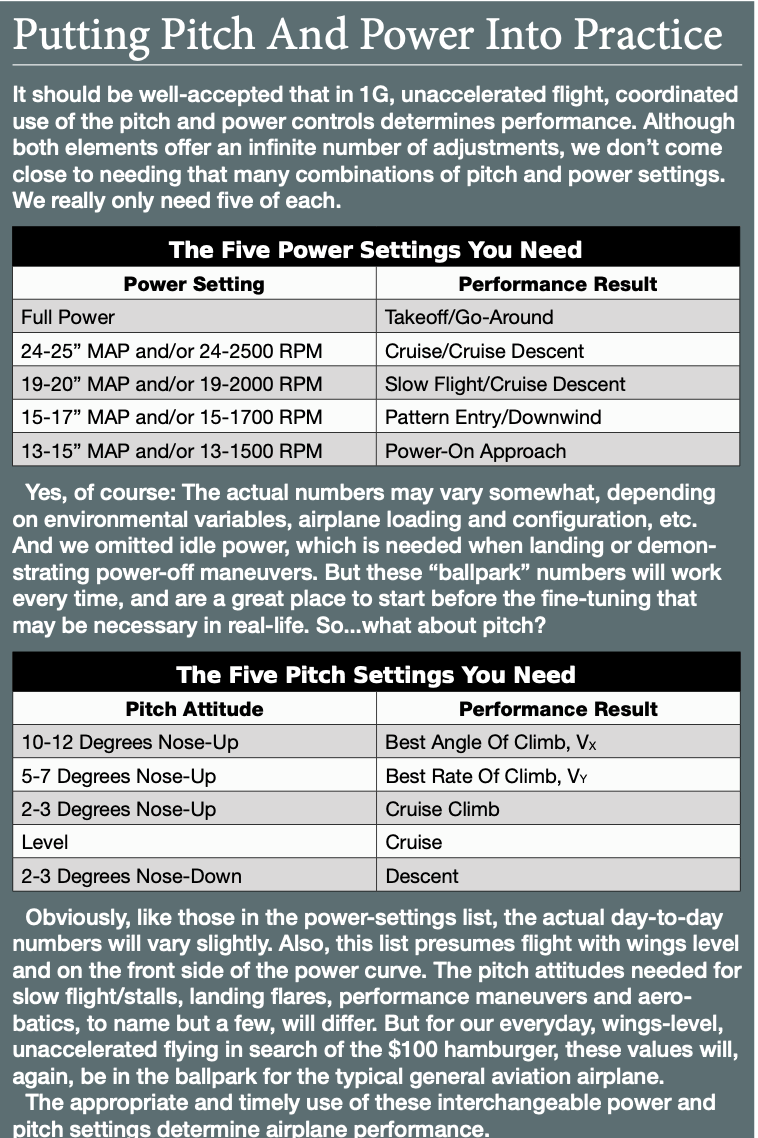 One of the reasons I ask that question involves my experience with other pilots. When I’m conducting a flight review with a general aviation pilot and ask him or her to increase airspeed, 95 percent of the time the pilot adds power. Similarly, if asked to slow down the airplane, invariably the pilot reduces power. Of course, this reflects a fundamental misunderstanding of the relationship between pitch and power.

By itself, adjusting power in a fixed-wing aircraft does not make it go faster or slower. Instead, it makes the airplane want to climb or descend. If my request is to climb, pilots tend to pull the nose up, and if I ask to descend, pilots push the nose down. The problem? Habit, specifically those perhaps first learned on a bicycle and then reinforced when driving a car: Power controls speed and gravity is always down. Put another way, by adding the third dimension—altitude—to our bicycling and driving habits, we must unlearn some of them and form new ones. This process is especially prevalent as pilots seek their instrument rating. It is virtually impossible to fly precision instruments under the hood or in actual weather without having “unlearned” the power-is-speed and “gravity-is-down” habits. For this reason, there is little doubt in my mind that instrument training improves all pilots’ skills. 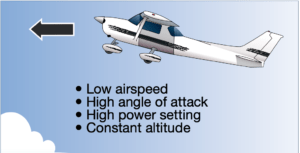 The unsafe habit(s) general aviation pilots may develop almost always can be linked to their early training’s focus on airspeed as the way to keep them safe. Only later, after some keystone habits are formed, are practical demonstrations of greater-than-1G aerodynamics explored. And in my view, it’s likely one reason that the industry has been unable to make a dent in LOC-I incidents is a failure to instill from the beginning the “habit” that airplane performance does not depend on engine power alone but on a more-complicated balance of pitch, bank angle and, yes, power. If we truly want to minimize LOC-I accidents, we need to change how we do ab initio training while finding ways to turn unsafe airspeed-focused habits into safer pitch-and-power habits.

Consider a slow flight demonstration, resulting in the performance depicted in the image at the top of page 6. To establish that demonstration, we need to reduce power and increase pitch to achieve and maintain level flight. What happens when power is reduced without adjusting pitch? The airplane starts to descend because the power necessary to keep it at altitude no longer is present. To maintain altitude as we establish the slow flight demonstration, it’s necessary to pitch up the airplane’s nose, which in turn increases the wing’s angle of attack, and then add sufficient power to maintain altitude. If one does not reduce power prior to pitching up, the greater angle of attack will initially result in a climb until equilibrium is reached, at which point the airplane will stabilize in its slow-flight configuration, although at a higher altitude.

So, how do we go about making pitch and power the keystone habit from the beginning of a pilot’s training? We need to teach that the pitch and power instruments are primary for controlling performance, and that the airspeed indicator is the instrument that confirms the desired performance is being obtained. We might even cover the airspeed indicator for demonstration purposes, eventually to include takeoffs and landings.

One thing that makes this work when flying typical general aviation airplanes, the kind most-often involved in LOC-I accidents, is that most of them can be flown with basically the same pitch and power settings to obtain the performance desired and of which the airplane is capable. The sidebar on page 5 provides some target values to start with. The way this works is that, given the same configuration, specific pitch and power settings will almost always result in the desired performance. Yes, there are minor differences of 100 rpm or an inch of manifold pressure between types. And in pitch control, VX may be 7.5 degrees nose-up in one plane and only seven degrees in a different one, with similar differences for other speeds.

Preventing LOC-I With Pitch and Power 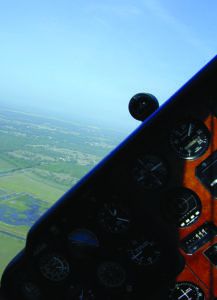 It turns out that if a flight instructor teaches the correct pitch and power settings for the desired performance without using the airspeed indicator, the airplane being used for flight instruction will fly at the desired airspeeds. If we taught pilots from the beginning of their training to use pitch and power to manage performance, the related settings would become the primary controls—the “keystone” habit.

Having learned stalls as a function of pitch-and-power settings, “surprise” stalls that often precede LOC-I accidents would hopefully trigger immediate corrective actions during the initial stall phase, not the panic reaction that delays corrective action until it’s too late.

If moderate and steep turns were taught during ab initio training using pitch-and-power techniques in lieu of the current model that focuses on airspeed control, it’s likely many LOC-I events could be prevented.

Virtually all the FAA-approved handbooks created by airplane manufacturers identify in-flight performance criteria with airspeeds. Thus, from a training perspective, it remains necessary to teach the airspeed indicator as nothing more than confirmation that the applied pitch and power settings are resulting in the desired performance. In other words, students would be trained that the correct pitch and power settings will result in the published airspeeds, not the other way around.

As noted above, different airplanes will have slightly different pitch-and-power settings, based on their critical angle-of-attack and elements of both induced and parasite drag. But these differences are generally insignificant and minor adjustments in pitch and/or power will correct for the state of flight desired. And learning those nuances in every plane is no different than learning different airspeeds in different airplanes. Even in the airspeed model of flight instruction, minor adjustments are necessary to get the correct airspeeds, so it’s really just a different starting perspective.

The hard part of transforming flight instruction in this direction will be educating experienced general aviation pilots. Finding ways to get experienced pilots who have always flown with the power-is-airspeed habit to unlearn it and relearn the pitch-and-power process will be difficult (at best).

The FAA FAAST program and/or the flight review process provide vehicles to increase awareness. In a flight review, having a preflight discussion with the pilot about pitch-and-power settings for his/her airplane is a good way to introduce the concept, followed by flight with the airspeed indicator covered up. The flight instructor needs to have practiced the concept to a point where he/she is confident in coaching an “experienced” pilot through the process.

Still, LOC-I incidents are unlikely to change if the aviation community continues doing the same thing over and over again while expecting different results, to paraphrase a quote generally attributed to Albert Einstein.

Controlling an airplane’s performance by reference to pitch and power settings isn’t new. The problem is not a function of knowledge but a result of inappropriate first-learned habits, derived from the two-dimensional world that we all live in and that have not been overridden by new keystone habits addressing the fact that airplanes operate in their own three-dimensional environment.