There’s a performance chart for every basic phase of flight. Pilots use them to determine how fast they can fly, for how long and how much runway they’ll use doing it, among other things. The tables, graphs and charts in the performance section of your typical personal airplane’s flight manual or operating handbook purport to identify for you, beforehand, the answers to the how fast and how long questions. Which gets embarrassing when we run the numbers and roll off the end of the runway anyway.

When that happens, it might be pilot error—maybe you made a mistake tracing your pencil along a curve on a performance chart. It also could be because your calculations are all wrong, not because you made a mistake—did you interpolate when you should have extrapolated?—but because the numbers you came up with are more advisory than exact. How can this be? There are several reasons. What can you do about it? There are several answers. Let’s explore.

It's Not A Dry Heat

As every student pilot learns, relatively high temperatures result in reduced performance while low ones improve it. The important factor is the air’s density, which affects how much power an engine produces or how much lift the airfoils designed into our wings and propellers generate. One factor often missing from temperature-related performance calculations is humidity.

According to the FAA’s Pilot’s Handbook of Aeronautical Knowledge (PHAK), small amounts of water vapor suspended in the atmosphere “may be negligible under certain conditions, but in other conditions humidity may become an important factor in the performance of an aircraft.” That’s because “water vapor is lighter than air; consequently, moist air is lighter than dry air,” which means it’s less dense.

“Pressure, temperature, and humidity have a great influence on aircraft performance because of their effect upon density,” the PHAK continues. Importantly, it concludes, “There is no rule-of-thumb or chart used to compute the effects of humidity on density altitude, but it must be taken into consideration. Expect a decrease in overall performance in high humidity conditions.”

Perhaps the most likely reason performance chart results turn out to be wrong on occasion has nothing to do with the calculations, unless you think “garbage in, garbage out” is a math error. Instead, the results we obtain from those charts can be in error because we fail to correctly assess local conditions.

For example, just about any takeoff performance chart for a CAR 3/Part 23 airplane will include a disclaimer to the effect that the results presume a paved, dry, level runway. The notes appended to the particular table, chart or graph explain how to adjust the calculations for the conditions you encounter An example from Cessna’s takeoff performance table for the T206H Turbo Stationair says “decrease distances 10% for each 10 knots headwind” or on a “dry, grass runway, increase distances by 15% of the ‘ground roll’ figure.”

Because these performance calculations are general in nature, there’s no correction factor supplied when, for example, the runway features a one-percent uphill grade, or the grass runway hasn’t been mowed recently because it’s too wet. What about taking off with a gusty wind, or with underinflated main-gear tires? Few, if any, performance charts, tables and graphs tell us.

Of course, how much our airplane weighs can be a major factor in determining its performance. In our experience, it’s rare to find one that weighs less than its paperwork states, and even rarer to find a passenger who correctly gives their own weight. Unless we weigh each piece of luggage, along with the tools, oil, cowling plugs, flashlights and charts stowed in various nooks and crannies throughout, we can’t know exactly how much the airplane weighs. Interestingly, it’s probably easier to figure out the arm and moment of the supplies you keep in the luggage compartment than it is to accurately gauge their weight.

And as the sidebars above and on the opposite page detail, the atmospheric conditions in which we’re operating also affect aircraft performance. Yes, some of this is pedantic and some of it is negligible, but it all adds up, and the end result on a high, hot, humid day can have us rolling off into the weeds on landing or takeoff as we wonder what went wrong.

Your Fuel Weighs More (Or Less) Than You Think 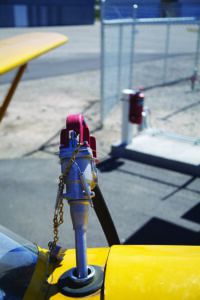 It’s an article of faith that a gallon of aviation gasoline weighs six pounds. That’s basically correct at ISA temperatures, but we’re not always flying in the standard conditions of 59 degrees F/15 degrees C, and the weight of a gallon of avgas is a function of its density. Of course, density changes with temperature.

In fact, a gallon of avgas in ISA conditions weighs 6.01 pounds, which is a negligible difference. But take that gallon to, say, northern Canada in January, where temperatures can be well below freezing, and it gets heavier. According to a table published by Measurement Canada, the nation’s agency “responsible for ensuring accuracy in the selling of measured goods,” a gallon of avgas weighs 6.43 pounds at -40 degrees C/F. At 40 degrees C/104 degrees F, avgas weighs 5.81 pounds per gallon.

Importantly, fuel density determines how much energy a gallon contains. Also, turbine fuels available outside the U.S. will have different densities and, therefore, different weights and performance by volume. And if you’re flying with mogas, per-gallon densities can vary even more, especially if ethanol is allowed.

the weeds on landing or takeoff as we wonder what went wrong.

TECHNIQUE, AND WEAR AND TEAR

Referring back to the Turbo Stationair performance charts, another note states, “Short field technique as specified in Section 4.” That portion of the airplane’s documentation includes a nine-step checklist with specific values for wing-flap extension, power settings, fuel flow and airspeed. One detail is to accelerate in a slightly tail-low attitude. Another is to hold the brakes until power is stabilized.

While it’s arguable whether a rolling takeoff can be considered a maximum-effort short-field procedure, what if we’re concerned about the prop picking up gravel? Or if the runway is sufficiently soft that we really don’t want to stop to do the run-up specified before releasing brakes? In both of these examples, the takeoff roll will be longer than “the book” says. How much longer likely is negligible but depends on how far we let the airplane roll before setting takeoff power and how hard the runway is. We’re not aware of any personal airplane manufacturer’s documentation that goes into this kind of detail.

So far, we’ve focused on takeoff technique. What about landing? How quickly do you pull off engine power when entering the flare? Do you slowly retard the throttle, immediately yank it back to idle or leave a little bit of power on because the engine has been idling rough lately and may quit on the landing roll-out?

For that matter, what about your crosswind technique? Do you touch down in a slight crab or employ the wing-low method, aligning the fuselage with the runway centerline? Which did the test pilots use?

In addition to the environment we fly in and the technique we use, the airplane itself has a lot to say about how well it performs. It should not come as a surprise that an older one that’s picked up a few dings along with a lot of dirt hidden in tight locations, or one with a propeller that’s had a few nicks filed out of it, isn’t going to perform as well as a brand-new one. An in-service engine can comply with all the various health measurements we use—including cylinder compression, fuel flow, oil pressure, etc.—and not achieve its rated power.

As an airplane ages, it likely will lose a knot or three from the removal and installation of inspection covers, cowlings and the like, plus normal wear and tear on landing gear doors, control surfaces and even the wings’ leading edges. All these factors and more likely will impact the airplane’s performance, sometimes making it unable to meet various aspects of the manufacturer’s expected performance.

Which Way The Wind Blows 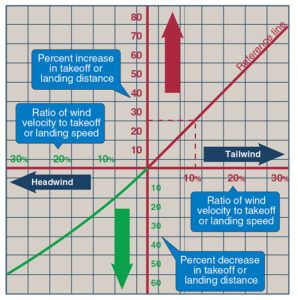 A constant element of runway performance calculations is the wind component—its velocity relative to the runway and how it affects the airplane’s groundspeed when taking off or landing. Too little wind and a short runway may be unusable unless we offload some weight. Too much wind from the wrong direction can be greater than the airplane’s demonstrated crosswind component, leaving us with a choice.

At many airports, there’s no automated equipment or human observer to measure and report wind velocity. Windsocks and other devices give us its direction, but pilots landing at those airports may not know the wind’s true velocity and effect on their attempt until reaching short final.

When taking off, it’s generally a lot easier to determine the wind’s heading, though big, gusty swings at right angles to the runway often mean a coin flip is as good a method of choosing a direction in which to take off as any other.

That’s usually not a problem unless the runway is marginal for the conditions. As the chart at right demonstrates, if you think you have a headwind but it shears to a tailwind, there will be a major impact on your takeoff performance.

WHAT DO TO ABOUT IT

Having read this far, you’ve probably figured out that you need to be careful when using book performance numbers to make decisions. Even if your technique is good, even if the runway is truly flat and even if the airplane has a fresh engine, it’s unlikely you can obtain the same takeoff roll as the factory pilots, or get down and stopped on the local golf course’s fairway. What to do? Add some fudge factor, of course. One question is, how much to add? One answer is how lucky do you feel?

We’d guess a typical pilot on a typical runway with a typical airplane can typically obtain something like takeoff performance within 125 percent of what the book says. In other words, if the book says 1000 feet of ground roll is required for takeoff under the existing conditions, you can do it in 1250 feet, thanks to the slight upslope, the dragging brake and the fact you haven’t practiced maximum-performance takeoffs lately. That’s not bad, actually, and we’d take it and run with it. What about a margin for error? Does that extra 25 percent buy you the padding you need in case the trees on the far end are taller than 50 feet? Maybe, maybe not.

So, add another 25 percent, making your performance expectation 150 percent of book. If the charts say you need 1000 feet, you know you can get up and out or down and stopped with 1500 feet of runway under the same conditions. Use that extra 50 percent as your “correction” to the book figures to ensure the airplane will safely perform the way you want it to. Because it’s likely your uncorrected performance calculations are wrong, not because of something you did, but just because.