If you’re like me, you’ve been watching the ongoing saga of Boeing and its 737 MAX. The gist of it for our purposes is that the new MAX versions of the 737 are powered by larger-diameter engines than the type was originally designed to accommodate. Since the 1980s—when Boeing switched from the type’s original low-bypass Pratt & Whitney JT8D engines to the CFM International CFM56—the reduced ground clearance when mounting high-bypass powerplants featuring improved fuel economy has required flattening the bottom of the cowlings. It was cheaper and easier than redesigning the landing gear, which is too short to accommodate the larger engines.

Seeking ever-greater fuel efficiency, Boeing equipped the 737 MAX with CFM International LEAP engines—the latest technology with an even larger diameter. To make everything fit, the company redesigned the MAX’s engine pylons to place the engines further out in front of the wing, allowing them to be mounted with appropriate ground clearance. That change in geometry apparently altered the airplane’s aerodynamics to the point that Boeing developed flight control system software—the Maneuvering Characteristics Augmentation System (MCAS)—to ensure the MAX’s handling characteristics were similar to previous models, in part to reduce airline training costs. That software apparently had flaws, though, which have been blamed for two fatal crashes under similar circumstances—and here we are, with the entire 737 MAX fleet grounded worldwide.

One of the things we learn as primary students is how increasing or decreasing engine power affects an airplane’s pitch attitude (there are other reactions, of course, but we want to focus here on pitch). For example, when airborne in a Cessna 172, adding power while maintaining the pitch control’s position will result in a nose-up pitching moment. It’s easily countered in most situations, and to relieve control pressures and maintain altitude with the higher power setting, we use trim.

Of course, the opposite also is true: Reducing that same 172’s engine power results in the nose pitching down. Again, if we want lighter control pressures at the same altitude, we reapply trim, this time in the nose-up direction. The 172’s reaction to power application and removal is typical for many of the airplanes we fly—singles, twins, turboprops and jets. But not all.

The reason the 172 and LA-4 react to power changes differently has a lot to do with the way their engines are mounted. The Cessna is designed so that its thrust line is positioned at or slightly below its center of gravity while the Lake’s thrust line is well above its CG. The FAA’s Pilot’s Handbook of Aeronautical Knowledge (FAA-H-8038-25B), defines thrust line as, “An imaginary line passing through the center of the propeller hub, perpendicular to the plane of the propeller rotation.” That’s pretty simple, though, and doesn’t consider jet aircraft, so for our purposes let’s use something a bit more universal: “Thrust line is the mean vector of an airplane engine’s power output.” 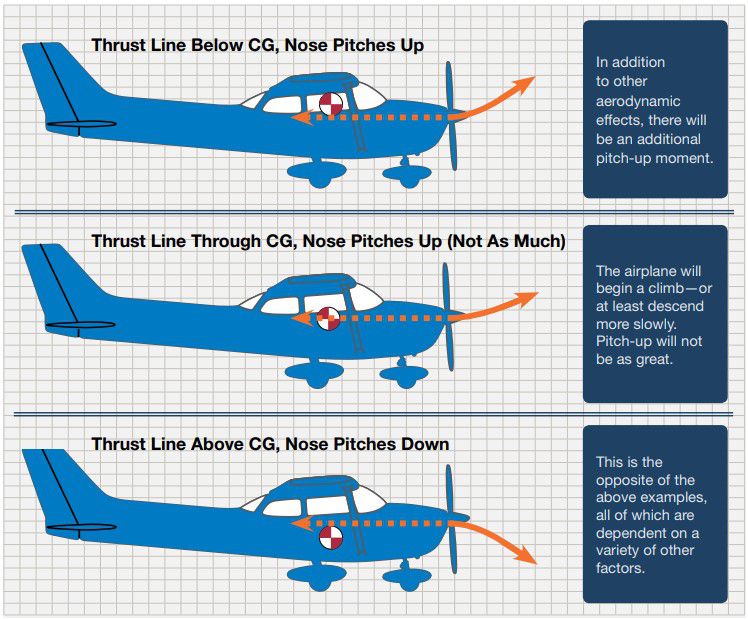 What else is going on aerodynamically when a conventional airplane’s power is increased or reduced? One answer is the effect on the horizontal tail, which may experience greater or lesser down force in sync with the power setting. There’s also what we’ll call propwash—the air sent rearward by the engine, which in conventional singles means the aft-mounted horizontal tail sees a different airspeed—and a different angle of attack—than the wings when power is changed. Of course, greater airspeed translates into greater lift (and drag…), which also can result in a pitch change.

But what we really want to get at is the relationship of the thrust line to the airplane’s center of gravity (CG), and how the two can interact. As we should know, the airplane moves about its CG. Any disturbance—a power change or a gust—with sufficient force will cause the airplane to react about its three axes (pitch, roll and bank) through the CG. The diagrams below shows what’s likely to happen to its pitch attitude when we add power to a conventional airplane with one of three exaggerated CG locations relative to the thrust line.

How the airplane you’re flying reacts to power changes depends on a variety of factors, not least of which is its configuration of engine(s) and tail surfaces. That’s especially true when a design departs from the familiar: a conventional airplane with a front-mounted engine and propeller, i.e., a tractor configuration. The Lake LA-4 sports a high-mounted powerplant configured as a pusher. Other pusher-configuration airplanes may react differently from the Lake, depending on their horizontal tail’s position and pushers with a canard surface (e.g., VariEze and Long-EZ) may not react at all.

When Boeing developed the MCAS and made it part of the 737 MAX, it apparently did so to remedy some aerodynamics it determined were incompatible with the handling characteristics of previous 737s. Since the only major changes to the configuration involve the placement of its engines, it’s a fair presumption that the MAX’s relationship between CG and thrust line changed.

Based on what has been publicly released about the MCAS, we suspect applying power to the MAX in some configurations and attitudes results in an unacceptable pitch-up characteristic. By moving the engines forward on the wing, Boeing extended their thrust line, allowing the new configuration’s greater torque to be applied in certain configurations and creating the need for MCAS.

Negotiating the relationship between power and pitch is something pilots do on every flight. A familiar example would be when going around on short final and in the landing configuration. The same 172 that pitches up slightly in cruise will do so much more forcefully when full power is applied for a go-around, which may be similar to the MAX’s behavior. We can’t be ready for that reaction without at least some understanding of how power changes can affect an airplane’s pitch attitude.