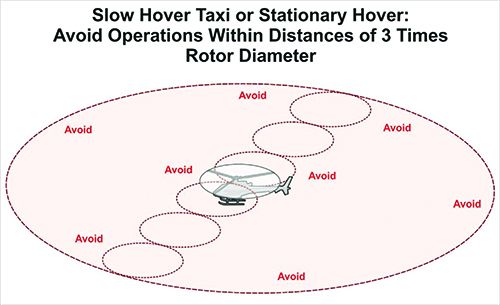 We’ve been victimized by both types of wake turbulence you described in your article (“Wake Turbulence,” February 2020).

Some years ago we were on a left downwind for Runway 16L at Van Nuys, Calif., at 1000 feet agl. Without warning, our heads were slammed into the cockpit ceiling. Then, nothing. I looked up and around and spotted a Southwest Boeing 737 at our three o’clock, descending 90 degrees away from us toward the nearby Class C Burbank Airport. We had hit its wake. Burbank is busy place, and Van Nuys is one of the busiest GA fields in the U.S. This sort of thing must be almost routine here. We had already switched from SoCal Approach, but you’d think we might get a warning. Obviously, we missed him coming in above us from the left, so technically that was our fault.

Another time though, we were really sitting ducks. Back when we were based at Santa Monica (SMO) during the George W. Bush administration, SMO often served as a staging area during security preparations for presidential flights into LAX, less than three nm south of SMO. One sunny day before a presidential TFR was to take effect, we decided to fill our tires prior to a flight. This required a taxi across the active runway to a wash rack that included an air station. We were holding short of the runway as instructed, when the tower cleared two gigantic helicopters to land. They appeared to be plainclothes versions of the Marine One chopper, huge Sikorskys. After landing, they continued to taxi down the runway in formation. Finally they began to approach us, and our Cessna 210 began to rock back and forth, shaken by the propwash. The shaking intensified and became so violent that I feared our plane would be flipped over with us inside. We keyed the mike and urgently relayed our situation to Ground—several times. The choppers stopped in place and then slowly began a right turn off the active, which actually made things worse until they began moving away. Really, both ATC and the chopper pilots should have known better.

All praise goes to Mr. Tillman for his efforts to save his crew and airplane (“Cockpit Smoke,” April 2020). Successfully handling real-life emergencies is due to a whole lot of training and study, great CRM skills and a good dose of luck. His comments on the EVAS are well taken but a caveat needs to be addressed.

As a Captain on a B767-300F which has EVAS installed, you have to understand something about the system. It is great, but it takes a fair amount of time to fill and the hardest part about it is to get it maneuvered into the proper position as it fills. Each airplane is different, but even in wide-body 767 cockpits it is tough to get in the right position quickly while you are trying to handle an emergency. If it is a low-to-the-ground-smoke-and-fumes scenario, you may not have time to get it filled and positioned in time. All the while as a crew you are trying to fly the airplane, run checklists, flip switches, navigate, program the FMS (if needed) and talk to ATC. At altitude or with time, as he said, it is great.

I am sure I am not the first to report this, but there is an error in the “Where’s It Say That?” article (April 2020). In discussing the rules required for an IFR alternate, on page 18, the point about selecting a suitable alternate is incorrect. The article states that, for a precision approach, you need 600 feet and one mile visibility and for non-precision, 800 feet and one mile. The reality is that it is actually 600 and two miles for a precision alternate and 800 and two miles for non-precision unless there are other published criteria.

I just do not want pilots thinking they only need a forecasted one-mile visibility to choose their alternate. Thanks.