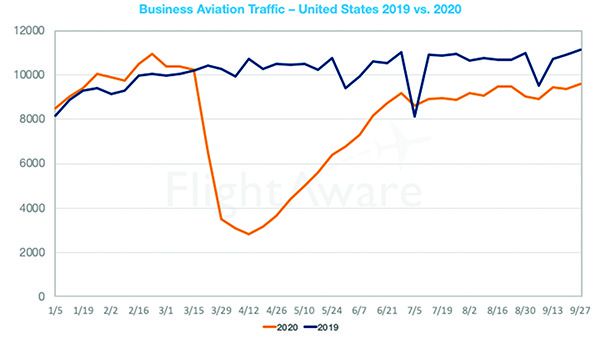 It’s not a secret that the Covid-19 pandemic has wreaked havoc on many industries and businesses. Aviation generally and general aviation specifically haven’t been immune, for which the impossibility of social distancing in a typical cockpit is at least partially to blame. It’s been a rough few months for the overall industry, and the downturn isn’t over, but there does seem to be some light at the end of the tunnel. How bright that light is may depend on which industry segment you’re in, plus your ingenuity. 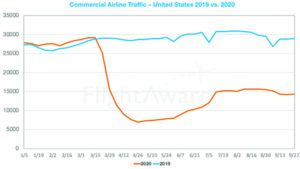 Available data shows general and business aviation operating at roughly 85 percent of 2019 levels as of late September. For turbine aircraft, operations tracked by organizations like FlightAware.com and presented in the graph below compares 2020 business aircraft activity—any turbine general aviation flights that are not commercial or cargo airlines—with the same period in 2019. Data on business jet activity specifically comes straight from the FAA and its monthly Business Jet Report. The August issue showed domestic U.S. bizjet operations were down by 14.5 percent when comparing July 2019 with 2020. Those two data points align nicely.

We also have good fuel consumption data for aviation gasoline from the U.S. Energy Information Administration. For June 2020, the most recent available, U.S. aviation gasoline wholesale/resale volume was down to 93 percent when compared to June 2019. In April, the same statistic was off by 62.3 percent, so it’s evident that recovery from the spring slump is occurring.

Activity numbers aren’t the only metric by which to measure general aviation’s recovery from the pandemic’s economic impact, however. According to a joint letter from AOPA President Marc Baker and NBAA President Ed Bolen to the Dallas Morning News in September, “…airports have taken a major hit due to the pandemic. By some estimates, general aviation airports across the country have seen a decline in operations by as much as 90% compared to last year.” The two also note that, at least in Texas, things got way worse before they bounced back to their current levels: “[W]e’ve seen general aviation operations fall by as much as 37% when things were at their worst,” they wrote.

The fact is general and business aviation are recovering more fully than the scheduled airlines. The graph at right compares the same time period as the one on page 2, but for domestic commercial airline traffic. Based on this data, at least, U.S. airlines have not fared as well as general and business aviation during the pandemic-related downturn. Confirmation comes from the Transportation Security Administration, TSA, which publishes the daily number of passenger going through its checkpoints. The low point—April 14, 2020—saw U.S. domestic passengers total 25 percent of the same day in 2019. In September, that number was peaking at around only 40 percent of 2019 passenger counts, depending on the day of the week.

More bad news comes from Daniel Baker, FlightAware’s CEO, who said in late September, “We’re seeing some stabilization in the US commercial numbers, which is reassuring.” It might be reassuring from the standpoint of eliminating peaks and valleys, but it shouldn’t be reassuring to an industry wanting to return to its 2019 activity levels.

One interpretation of these numbers is that airlines have lost typical middle-management business traveler and leisure passenger revenue until further notice. The number of people who need or want to be cooped up with 200 of their closest friends for a couple of hours isn’t enough to sustain 2019’s airline industry, at least not in the U.S. And as discussed in Bob Wright’s article on page 8, advanced technology may alleviate the public’s reluctance to use general aviation.

For those who make their money in general aviation, the outlook is surprisingly favorable. The phrase “heighten the contradictions” can be traced back to Karl Marx, and thus has anti-capitalist roots, but it also can be the foundation of a marketing strategy. An industry segment leveraging the economic and technological upheaval we’re experiencing just might finally realize its untapped potential.