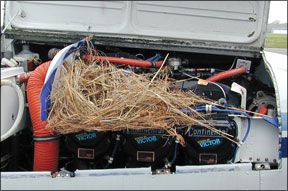 Our long national nightmare-winter-is mostly over as I write this. Daylight Savings Time has arrived to those locales embracing it and engine pre-heaters are getting a well-deserved rest. As spring arrives, along comes a list of real and potential changes with which we all may need to contend.

We told you last month in this space about proposed changes to the ways in which the FAA is funded. In addition to giving major airlines substantial control over the agency, proposals under consideration would sharply hike the fees you and I pay.

Congress will decide the issue later this year.

In the meantime, the general aviation industry and the airlines are increasingly engaged in a classic “David and Goliath” battle. All signs-including an ATC-derived image purportedly showing bizjets clogging Florida skies the morning after this years Super Bowl-point to an ugly fight ahead.

announced it is switching from depending on Avidyne for the guts of its avionics and automation system, known as “Avio,” choosing instead a mix of components offered by the industrys “usual suspects.”

Integrating these different products into a user-friendly system will be a challenge. Hopefully, the results will trickle down to other platforms, helping ensure future black boxes will work and play with each other better than ever.

Eclipse also said it is terminating its training agreement with United Airlines; a new training partner will be announced shortly. There were no details available, but some observers speculated the potential liability exposure made Uniteds participation too expensive. Another possible theory is political: Why should United train pilots to fly what many believe will be the airlines stiffest competition? Regardless, the larger story is the developing state of the VLJ industry and safety. Well be watching closely.

Nows a good time to take a moment to consider the season and the different challenges it poses. With warmer weather, airplane performance wont be as crisp and gusty crosswinds will quickly expose any rusty technique.

If your airplane is parked outside, increased wildlife activity may mean new bird nests or other concerns. As always, a thorough pre-flight inspection-including the various places birds and other animals may seek shelter-is your best defense.

Finally, its also air show season. Before you get “up close and personal” with a bunch of other airborne aircraft, make sure your skills are up to the task. Some pattern work and slow flight with a CFI wouldnt hurt a thing.