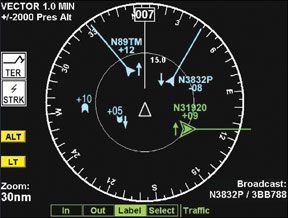 A news story appearing in August quoted a Washington think-tank member as blaming general aviation for the delays in implementing ADS-B, the underlying technology in the FAAs latest scheme to modernize the national airspace system and improve efficiency. Robert Poole of the ironically named Reason Foundation was quoted by online sister publication AVweb.com as saying, “Because aircraft owners balk at being forced to buy and install new gear until they get real benefits from it (and this is especially true of GA owners), FAA felt under strong political pressure to make the deadline as far off as possible (hence, 2020).” Itd be a wonderful thing if GA had that much clout at the FAA.

Pooles comments came in a recent newsletter his organization published, taking to task the FAA for its too-far-in-the-future 2020 deadline. He leveraged the agencys delays to revisit one of his pet projects: privatizing ATC. All of this was in the aftermath of overwhelmingly negative comments to the agency in response to a recent notice of proposed rulemaking on ADS-B. According to Poole, the FAAs proposed regulation “spelled all costs but no benefits, leading to a flood of negative comments in response to FAAs notice.” Well…yeah.

One of the fundamental problems GA continues to have with NextGen, the FAAs latest ATC modernization proposal, has little to do with ADS-B itself. Instead, the industry recognizes it for what it is: An attempt by the FAA to place the burden for communication and surveillance on operators, removing those functions and associated equipment costs from the FAAs shoulders. As Poole acknowledges, “The business case for ADS-B rests on being able to retire a large fraction of the FAAs huge network of ground-based radars.”

Poole offers up remote areas of the world-the Gulf of Mexico, the North Atlantic and South Pacific-as locations where “ADS-B offers much better real-time information for ATC as to where planes are,” producing benefits like “more direct routings and optimal altitudes for reduced fuel burn.”

That may be true, but ADS-B already is in use over the Gulf of Mexico among petroleum industry support operators. Elsewhere, in non-remote areas, users seem quite happy with the communication and surveillance services theyre receiving from the existing ATC system. They know most delays are caused by carriers scheduling more operations than available airport pavement can handle. Additionally, users have long memories, and recall FAAs push toward the Mode S-based traffic information service, TIS. A few short years after TIS was implemented-and users equipped with the more expensive transponders-the agency began eliminating the service at certain locations.

The FAAs (and Pooles) real problem in trying to sell NextGen and ADS-B to GA is weve seen this equip-now-and-the-benefits-will-come movie before. Theres no need for a sequel.