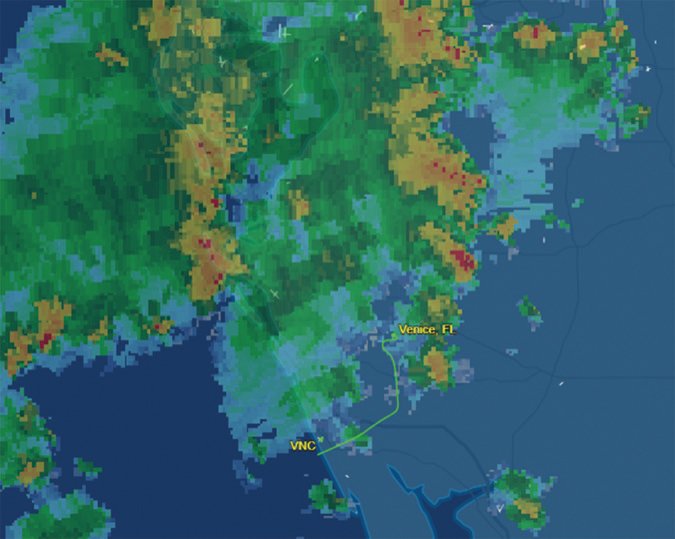 My Debonair had to go to the avionics shop recently for its 24-month pitot/static and transponder checks, and to diagnose an autopilot that wouldn’t. As I feared, autopilot system components had to go out for factory attention, and the removal work would take longer than my schedule allowed. So I left the airplane and Uber’d home. Before I had the free time to retrieve the airplane, my part of Florida was seeing a constant flow of moisture and showers coming in from the Gulf of Mexico.

The typical morning weather featured mid-level stratus peppered with a lot of random, slow-moving showers that were easy to see and dodge. The afternoons featured the same on steroids, with lowered ceilings and larger, more problematic thunderstorms living up to their name. The combination made the afternoons much more exciting than I wanted to deal with for the 10-minute ferry flight back to home plate. So I caught a ride to the avionics shop one morning and saddled up for the short hop.

By the time the wheels were in the well, one shower was doing its thing along the direct route to my destination. Another shower was a few miles to the north of the runway, while a third had dumped its moisture and moved off to the east. If any of those storms decided to change course and get in my face, I had five hours of gas aboard and a bolt hole to the south.

A simple dogleg got me around the first one and left me almost due south of my target. I motored the rest of the short way home in severe clear, but with slow-moving cumulus on three sides.

I get a bit cranky when dealing with conditions like this, but not because I’m worried about stumbling into a storm. It’s because I don’t like to roam around in scuzzy weather trying to get into my destination, which lacks an instrument approach. I’m more than ready to find a spot to orbit while a shower moves off, but they usually move too slowly for me to just go around in circles, burning avgas—it easily could take an hour of holding for a storm to clear. When I can’t get into home plate, I usually divert to a nearby airport—of which there are plenty of choices—and avail myself of their pilot’s lounge until the storm literally blows over. But it can be a colossal waste of time.

For this flight, the air was smooth and visibility was good, and I slid the mains onto the runway and got the airplane back into its hangar well before another storm happened by. I had two or three Plans B, and the flight’s eventual outcome was never really in doubt. But the impatience I was anticipating if a storm got in the way was on my mind. I readily understand how some pilots will let their impatience grow until they throw caution to the wind and plow into weather neither they nor their aircraft can handle. Don’t.