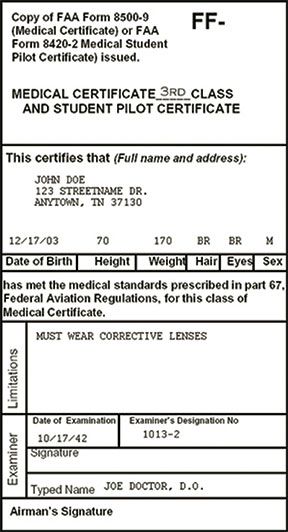 Sport pilots don’t have to have an FAA medical certificate to serve as pilot in command (PIC) of a machine meeting the light sport aircraft (LSA) definition. Instead, they must only carry a valid driver’s license. Since the sport pilot and LSA rules went into effect in 2004—10 years ago—the affected aircraft have not been falling out of the sky because their operators aren’t physically fit. We call that a success.

So do many in the industry. On March 20, 2012, the Experimental Aircraft Association (EAA) and the Aircraft Owners and Pilots Association (AOPA) petitioned the FAA to allow a pilot lacking a current third-class or better medical certificate to operate a single-engine aircraft with 180 hp or less, four seats or fewer and fixed gear. The flight must occur in VFR weather during the daytime and would be limited to carrying one passenger. By the summer of 2012, the FAA received more than 14,000 comments on the petition, most of which supported it.

But the FAA failed to act on the petition, and now AOPA and EAA have upped the ante: On December 12, 2013, U.S. Rep. Todd Rokita (R-Ind.) and five cosponsors introduced H.R. 3708 in the House of Representatives. The bill, known as the General Aviation Pilot Protection Act of 2013, has 16 cosponsors as of this writing. According to EAA, if enacted, the bill would “allow pilots to use a valid state driver’s license in place of the traditional medical certificate if the flights are:

• Not for compensation;
• Conducted in VFR operations only, at or below 14,000 feet msl;
• No faster than 250 knots; and
• In aircraft with no more than six seats and no more than 6000 pounds’ gross takeoff weight.”

In their 2012 petition, AOPA and EAA addressed the concept of “equivalent safety,” noting an AOPA Air Safety Institute study found “there have been NO [LSA] accidents attributable to pilot medical deficiency.” Additionally, the petition compared sport pilots with their cohorts holding an FAA medical concluding, “An equivalent level of safety regarding aeromedical factors exists between those operations that currently require a medical certificate and those operations that do not currently require a medical certificate.”

Eliminating the requirement for a medical certificate as outlined in H.R. 3708 would help deregulate general aviation in the U.S., extending the ability of an aging pilot population to operate personal aircraft, yours truly included, without any measurable impact.

Too often, those who advocate eliminating “needless government regulations” ignore some benefits of the rules they target. As the record demonstrates, the only group who would benefit from the status quo are a small group of FAA employees and the AME community. It is time for this rule to go. — Jeb Burnside