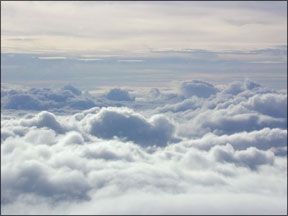 Two round trips up and down the east coast over the recent year-end holidays reinforced for me the incredible transportation value that is the personal airplane. They also reminded me we are operating these airplanes in not just three dimensions, but four. The fourth? Time.

my old one in the D.C. area. Due to some personal complications as well as the need to perform some much-needed TLC on the airplane, I didnt get away until late in the day; most of the flight would be at night.

Some of that delay was by design, however, involving a fast-moving and wet front pushing in along my route from the west, extending north to New England and south into the Gulf of Mexico. It was dumping rain all along the east coast, and the weather-guessers were advertising real wind-gusts to 35 knots in some locations-to come in behind it. Ceilings were low until the front passed, but they wouldnt matter much if I had a 35-knot direct crosswind at my destination.

Knowing the arrival weather would be better the longer I waited, I took time with my chores, finally launching around 4:15 local time that afternoon. One aspect of all this weather was a crisp tailwind. Soon, I was zipping north at 11,000 feet, sniffing oxygen, with around 190 knots of groundspeed. Life was good.

I closely watched my onboard Nexrad weather display to confirm some convective weather-thunderstorms in late December?-had moved off. They had, and I was enjoying a mostly smooth ride. Soon, a full moon joined me in loose formation.

About an hour out of my destination, I pulled up the areas Metars. One station was reporting decent ceiling and visibility, along with the expected honking wind at the surface. Other stations, including my destination, were saying they had good VFR with calm winds.

Calm winds? That doesnt make sense; with all the drama advertised in the forecast, they should be reporting something akin to the tornado scene from

The Wizard of Oz. Soon, I was within ATIS range and, sure enough, was advised to expect good VFR with almost no wind. The only thing in the advisory to raise an eyebrow was the one-degree-C temperature/dewpoint spread.

The letdown, visual approach and landing were smooth and uneventful. As I turned final, I saw quite a bit of rain had fallen earlier, but it all had blown out; the airport and vicinity were clean and clear.

By the time I cleared the runway, though, a patch of fog had formed- the temperature had fallen to the dewpoint. I taxied through several more before reaching the ramp. After corralling my car, I had to pick my way through the fog to the nearby highway-it had gotten that bad.

Thankfully, I had timed this flight just right. Id like to say it was skill and experience that made it turn out so well, but luck had more to do with it than anything. All I really “knew” when planning this flight was a later arrival would be better than an earlier one. That said, ground-bound locals later told me the non-aviation forecast had been for some really bad weather that simply didnt materialize. Either way, Ill call it luck and be thankful.

The “get back” was similar, but also much different. A low-pressure system was moving its way up the east coast; I wanted to fly a direct route taking me just west of its center. It was spinning out plenty of rain over Virginia and the Carolinas, and icing was in the forecast. But something wasnt right.

Surface temps hovered just above freezing. By all rights, this system should be dumping snow or some other frozen precip. It wasnt, and the reason why didnt become clear until I took a closer look at the winds aloft.

I already was pleasantly surprised to learn Id have a tailwind most of the way south. Closer inspection revealed a mild inversion: The temperatures aloft were well above freezing, eliminating icing issues at lower altitudes.

After an uneventful departure, I was soon motoring my way home at 4000 feet, enjoying a 20-knot tailwind and giving the airplane a much-needed shower. I watched the OAT gauge closely, but it dipped below 40 deg. F only once, for a couple of minutes.

Meanwhile, I overheard a Cirrus pilot flying a similar route slightly west of me seek re-routing. He was at 10,000 feet and clearly didnt like his flight conditions. After two or three stabs at finding a route that would keep him out of the weather, he threw in the towel, diverting to Greensboro, N.C. The last transmission I overhead him make included “light ice.” Knowing the first thing hed do once on the ground would be to check weather, I gave Flight Service a Pirep that included my OAT, GPS-observed winds, flight visibility in light rain, altitude and a ride report. Hopefully, he or someone else would figure out the low-altitude choice was the way to go.

Soon, I flew past the low, the rain disappeared-along with the tailwind-and I made it to home plate with only ATC-generated fuss. Later that day, I checked with an Internet-based flight-tracking service and discovered the Cirrus driver spent a couple of hours on the ground at Greensboro before re-launching and eventually making it to his destination.

The moral to all this basically is that we operate our airplanes in several dimensions. These include the lateral plus the vertical. But theres also the temporal dimension summed up by the old saw, “If you dont like the weather, just wait a while. Itll change.” Another way to put it: Timing is everything.

Ultimately, our Cirrus pilot used the time dimension to wait out the worst of the weather. He had tried the lateral dimension-a different route-but was unsuccessful. His main problem, though, was in the vertical dimension: If he had descended to warmer air, he wouldnt have had an icing problem. He might not have had the same tailwind he had at 10,000 feet, but he most certainly would have experienced less drama.

Why he chose an altitude where freezing temperatures and moisture were combined is a mystery. Admittedly, the terrain over which he was flying is much higher than where I was, but he wasnt that far west and could easily have been over flat, low land in little more than the time it would have taken to descend to my altitude.

My trip north, on the other hand, was a case study in waiting out the bad stuff. When considering the convective activity, low ceilings, gusty winds, forecast turbulence, etc., it wouldnt have been a pleasant trip earlier in the day. By delaying my departure a couple of hours, I got really lucky.

One of the keys to dealing with weather is flexibility. Its relatively common to hear pilots talk about going around or over the bad stuff. Its also common to wait out the worst of it. But truly maximizing our flying machines utility requires full awareness of the options we have in all dimensions, along with the ability and willingness to exercise them.