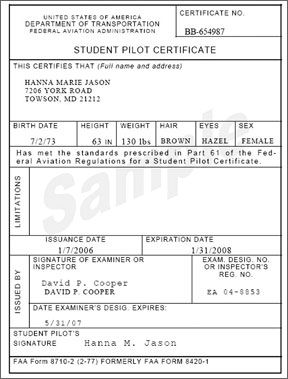 Its been more than six years since the FAA established the sport pilot certificate. Along with the rules on what a sport pilot can and cannot do, there was something noticeably missing: Any requirement for a sport pilot to obtain or hold an FAA medical certificate, as long as he or she has a U.S. drivers license (and

had not been denied a medical). At the same time, the new rules allowed anyone with a higher certificate to fly a light sport aircraft without a current medical but with a current drivers license.

Meanwhile, a 2004 study published by the FAAs Office of Aerospace Medicine looked at in-flight medical incapacitation of U.S. airline pilots for the period 1993-1998. While noting “[t]here is a lack of high-quality data” on the subject, the report cited a separate study concluding a 0.074 percent probability of in-flight incapacitation. Thats pretty low, and includes pilots with medical certificates.

The conclusion should not be some medical certification isnt needed. Instead its this: A medical certificate alone isnt a guarantee against pilot incapacitation, and a drivers license is a good, inexpensive indicator of fitness to serve as pilot in command.

What to do? Well, for starters, theres a formal petition before the FAA to eliminate requirements for a third-class medical before serving as pilot in command of an aircraft with a maximum gross takeoff weight not exceeding 6000 pounds and operated under Part 91. This is the real deal: a formal petition for rulemaking not unlike the one the U.S. Environmental Protection Agency is using to question whether 100LL avgas is a public health hazard. Its something we all should be supporting.

To do so, visit www.regulations.gov, enter the docket number- FAA-2009-0481-into the “keyword or ID” search window, read the petition and leave your comments.