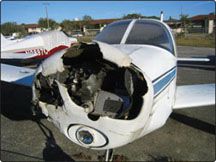 Odds And Ends
Several interesting things have crossed my desk in the last month or so. None of them alone justify taking up all of this space but, together, they comprise a reminder of the responsibilities owners and operators have to keep their aircraft airworthy, both legally and technically, and to conduct safe operations. Theres a lot more I could say about each of these items, but Ill bite my tongue and encourage readers to chime in with comments. Ill consider running them in a future issue.

Aircraft Registration
On December 1, 2005, the FAA reminded (read: warned) pilots and aircraft owners that it and the Transportation Security Administration believe that it is in the interests of national security and aviation safety to ensure that only properly registered aircraft operate within the National Airspace System (NAS). The published notice set February 1, 2006, as the deadline by which all U.S. aircraft must be properly registered with the FAA. According to the notice, operators of identified aircraft with questionable registrations and or no TSA-required security measures/waivers will be: (1) Notified of the deficiency, (2) a pilot deviation will be filed on the operator, (3) operator may be denied access to the NAS.

To verify and/or modify your aircrafts registration data, start by visiting the FAAs aircraft registry at registry.faa.gov/aircraftinquiry.

Updating GPS DataBases
I noticed another useful tidbit in a recent electronic newsletter published by the AOPA. In it, the association reminds owners and operators that FAR Part 43 defines updating an aircrafts installed GPS database as preventive maintenance.

Hand-Propping
Finally, it comes to our attention that, in mid-December, a Cherokee 140 pilot at the Venice, Fla., airport attempted to hand-prop his airplane after discovering a dead battery. It didnt work out too well.

Its difficult to know for certain-the Cherokees pilot and now-former owner isnt talking too much about it-but the throttle apparently was set at near full and the plane obviously was not secured. At that power setting, it hit a concrete-filled six-inch steel pipe. The spinner, prop, flywheel and four inches of crankshaft sheared off and flew 100 or more yards, landing on top of a nearby maintenance hangar. The results are pictured above.