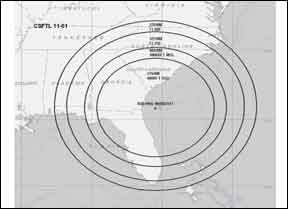 Several items of interest crossed my desk in recent weeks, all of them involving the FAA and its ongoing struggle with technology and funding. That the agency has difficulties identifying and implementing strategies embracing new hardware, software and procedures shouldnt come as a surprise to anyone whos been paying

attention over the last few years. Yet, these news items point out the FAA doesnt seem to have learned anything from its past mistakes and is poised to make a few more.

One of the first items to catch my attention was a January 19, 2011, FAA notice advising operators of extensive GPS testing conducted by the U.S. Department of Defense (DoD) through February 22. The testing, according to the notice, was centered some 50 nm off the coast of Georgia and may result in unreliable GPS signals in the area surrounding it.

How large is the area? Its a whopper, as the image here demonstrates. According to the notice, “GPS will be unreliable and may be unavailable” within a circle of 325 nm at FL250, 260 nm at 10,000 feet msl and 215 nm at 4000 feet agl. At 10,000 feet, the affected area extends to the Bahamas, across Georgia into Alabama, to North Carolina and covers most of Florida, including the eastern Gulf of Mexico.

A number of questions can be asked about this DoD testing, not least of which is why its necessary. The basic GPS system went operational in late 1993, following testing that began in the 1970s. After almost 40 years of testing and some 20 of operational use, youd think the DoD and others would know by now what makes GPS tick, along with its various failure modes. Why is such testing still being conducted in U.S. airspace?

But the real questions in my mind stem from implementing the FAAs Next Generation Air Transportation System (NextGen), which will be designed to use GPS exclusively, even as ground-based navigation systems like VOR/DME are phased out. For example, what backup navigation systems will be available once NextGen is fully implemented? A similar system-Loran-C-recently was shut down. What, if anything, will replace it?

But the $64,000 question is this: If were supposed to be transitioning to all GPS all the time, will DoD testing continue to disrupt this signal? If so, this doesnt bode well. Someone needs to step up and explain why such testing continues-especially in U.S. airspace-what its designed to achieve and whether it will continue once theres no other system available.

In early February, it was announced the FAA will pay $4.2 million to install NextGen avionics in 35 airplanes operated by scheduled carrier JetBlue. According to at least one news report in the Washington Post, the FAA hopes the new equipments “enhanced performance will entice the airline industry to invest up to $20 billion in the new technology over the next decade.” Good for JetBlue, I guess.

The other shoe fell the same week, however, when the Wall Street Journal reported “U.S. airlines are likely to come away empty-handed in their bid to have Congress authorize government funding for onboard air-traffic control equipment.” The article noted overdue Senate legislation to reauthorize the FAA lacks funding for airlines to install NextGen equipment.

Of course, the announcement JetBlue will receive $4.2 million comes on the heels of what online sister publication AVweb.com reported in late December as 2010 airline-industry profits which “eclipse those from any single full year since at least 1999.” According to AVweb, the airline industrys profitability results from higher airfares when compared with 2009, along with fewer flights and flying planes filled to capacity. And lets not forget the proliferation of fees for services like checking additional bags.

Meanwhile, no one is holding their breath waiting for general aviation operators to receive financial assistance to equip with NextGen avionics. I wonder why?

A final news item involves a February 3, 2011, General Accountability Office (GAO) report on the FAAs Airport and Airway Trust Fund. Thats the account into which receipts from the airline ticket and non-commercial aviation fuels taxes are deposited. Its used to fund things like new runway pavement and ATC equipment.

The report notes revenues are down to $10.8 billion in fiscal 2010, versus $12.4 billion in 2008. Additionally, the uncommitted balance in the fund was as low as $300 million at the end of fiscal 2009, though it climbed back up to $770 million at the end of 2010. The GAO went on to note future “revenues under the current tax structure may be lower than previously anticipated” and posed a series of questions Congress may wish to investigate on ways to reverse the current trend.

None of the GAOs questions, however, considered the aforementioned service charges and miscellaneous fees airlines levy on their passengers in addition to the ticket itself. The trust funds major revenue source is a tax on airline tickets, but the additional fees passengers pay arent taxed. Maybe looking at those untaxed fees and charges would allow the trust fund to recover? Just sayin.