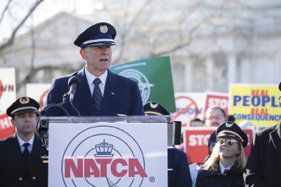 The recent partial shutdown of the U.S. federal government had a far-reaching impact on aviation, thanks to its parent Department of Transportation (DOT) being one of the agencies lacking an enacted appropriations bill for the current fiscal year. Since related agencies are tacked onto DOT spending bills, the NTSB also closed for the duration, delaying ongoing investigations and postponing new ones. (Our monthly listing of preliminary accident reports might look a bit strange until the NTSB has caught up with the backlog.)

Employees and contractors who suddenly found themselves furloughed without pay—or were forced to work without pay, like air traffic controllers—bore the brunt of the pain the shutdown inflicted. Ironically, it seems to have been those same controllers whose growing dissatisfaction with the shutdown led to staffing isues that helped end it. Strong statements from airline-industry labor organizations also helped. Once it became clear that ATC system slowdowns resulting from controller staffing issues had begun affecting travel, the shutdown was ended the same day.

According to a letter signed by more than 30 general aviation organizations, the shutdown also suspended air traffic controller training, slowing the arrival of new workers; curtailed pending general aviation aircraft certifications, plus work on safety-related actions like airworthiness directives; and prevented the FAA from issuing new student pilot certificates, halting training for prospective pilots. According to NBAA, these aviation-industry impacts were joined by an inability for pilot-applicants to take their FAA written exams, or obtain modified or new letters of authorization from a Flight Standards District Office, a ferry permit or importation paperwork. Other aviation industry participants suffered, too, with airline passengers subject to lengthy delays clearing TSA security checkpoints and the airlines themselves foregoing timely FAA services.

We have an acquaintance who cheered on the shutdown, exclaiming some version of, “Who needs government, anyway? It all should be shut down.” That ship sailed some time ago and, in the shutdown’s aftermath, even fewer of those comments would be expected in the future. Besides, highly regulated industries like aviation are highly regulated for a reason: There’s too much going on and too many ways to screw it up without standards set and enforced by government.

Other than the aforementioned NTSB prelims and some questions of the FAA that likely will remain unanswered, the magazine came through relatively unscathed. Personally, the flights I conducted and the ATC interactions I had went as smoothly as ever, even though the person on the other side of the mic wasn’t getting paid to talk to me. Hopefully, we as an industry won’t have to go through this again. If we do, I don’t think it’s likely to go as smoothly.