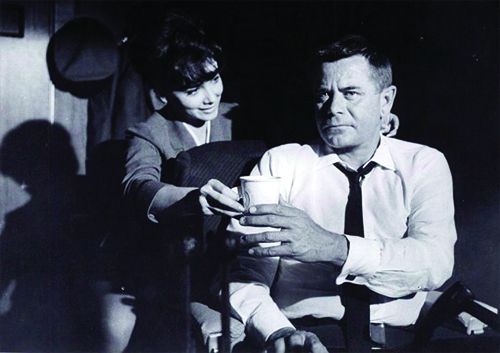 I’ve long been a big fan of Ernest K. Gann’s writings, to the extent I pull down and re-read my copy of “Fate Is The Hunter” once a year or so. It’s a remembrance of Gann’s service as an airline pilot before WWII, then as a cargo pilot during the war, and his adjustment to the post-war aviation era. If you have a long-term commitment to learning all you can about aviation and haven’t read the book, I highly recommend it.

If nothing else, it also reinforces the maxim that a good book doesn’t necessarily translate into a good movie. The film version of the book is okay, but it’s not nearly as gritty a look at Gann’s career as reading about it. (“Islands In The Sky,” a 1953 film about one of the book’s episodes, is a much better adaptation.) Released in 1964, FITH features iconic actors like Glenn Ford, Nancy Kwan, Rod Taylor, Wally Cox and Suzanne Pleshette.

The plot surrounds the fictional crash of an airliner, which kills all aboard except the stewardess (that’s what they were called then) played by Pleshette. The investigation suggests the pilot, played by Taylor, misinterpreted cockpit indications after first one then the other engine “failed” soon after takeoff, causing the crash. Investigators, however, find nothing that would have prevented the good engine from producing power. Ford’s character, who was a long-time friend of Taylor’s character, gets permission to fly an identical airplane under identical conditions in an attempt to clear his friend’s name.

It’s not too much of a spoiler to tell you that the second engine failure, which resulted in the crash, involved a cup of coffee that was spilled on the instrument panel when the first engine failed.

I was reminded of all this when I came across a news item reporting that EASA, the European Union Aviation Safety Agency, had published an airworthiness directive (AD) creating a “liquid prohibited zone” in the Airbus A350 cockpit. According to the EASA AD, “Two in-service occurrences were reported involving inadvertent liquid spillage on the ENG START panel or ECAM Control Panel (ECP) on the centre pedestal in the flight deck on A350 aeroplanes. In both cases, the aeroplane experienced an un-commanded engine in-flight shut-down (IFSD) of an engine some time after the liquid spillage. Subsequent engine relight attempts were not successful. In both events, the flight crew performed a diversion and landed the aeroplane safely.” The EASA AD follows an Airbus flight manual revision creating the liquid-free zone.

I share this with you because I find it quite amusing that modern aircraft engineers never learned something anyone who’s seen the 56-year-old film already knows. The lesson is that, no matter what happens in our cockpits, there’s probably someone who’s had the problem before, perhaps in fiction, and we just have to figure out what they did to resolve it.