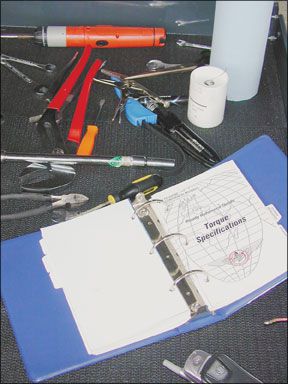 Got a pencil?” So began a recent phone call from my airplane mechanic. We were (well, he was) in the middle of a multi-day effort to completely overhaul my airplanes landing gear and other mechanical systems. While theres no Part 91 requirement for such a massive project, those with more experience working on my airplane type-a mid-60s Beech Debonair-strongly advocate doing this kind of service at around 4000 hours. I was slightly more than 1000 hours late.

We already had spent a substantial amount of time researching sources and pricing on various replacement parts like rod ends and bearings, as well as refinishing and reusing many of the parts removed for close inspection. In all, the airplane was in good shape. Still, we opted to replace several components. Or tried to, anyway.

With a couple of exceptions, we found new parts simply werent available from Hawker Beechcraft. My favorite example is a main landing gear uplock bracket, a piece of stamped and drilled aluminum sheet. Mine displayed some corrosion and needed replacement.

I checked Hawker Beechcrafts pricing and found that while the parts price was more or less reasonable-the usual test for whether a price is reasonable is how long it takes my laughter to subside-it was unavailable. Instead, I was greeted with a projected manufacture date several months in the future: The date I might actually receive the part wasnt available, either. In the end, we obtained a non-corroded, used part, checked it for conformity to the one we removed and installed it.

Another assembly, this time in the nosewheel steering mechanism, also proved problematic. After sifting through supersedures, I was told the four parts I needed were available but the price tag would read north of $2500. After consulting with my mechanic, we decided to rebuild what we had. Some bushing stock, an expensive new fastener and free use of an on-site machine shop resulted in a refurbished assembly for much less money than buying new. The kicker came later that day when I visited the hangar and realized the entire assembly could be held in the palm of my hand, with room left over for a credit card. (Forget oil futures-Im investing in old airplane parts from here on.)

But theres more going on here than just a corroded hunk of stamped aluminum or re-bushing a nosewheel-steering yoke. All of the research for parts new and old took many hours of my and his time. Plus, if I wasnt blessed with having a skilled, patient mechanic who didnt mind rounding up the tools and outside talent required to refurbish what we had, Id be writing some big checks, waiting a long time for Hawker Beechcraft to make me some parts, or both.

Im very fortunate he likes to work on my plane, but Im also rather rare: an active, hands-on owner who, like my mechanic, enjoys the idea of owning and operating older machines and keeping them in top condition. Paying this kind of attention to an older airplane is not every pilots cup of tea. As one exhibit, we offer Cirrus ongoing sales success.

But this also highlights the fact aircraft ownership isnt for everyone-the responsibilities are not even remotely the same as owning a car, for example-and that, to minimize maintenance costs while ensuring full capability and with the utmost in safety, owners must invest substantial effort. As the airplanes get older, the effort also increases. At some point in the future, the juice wont be worth the squeeze.

In fact, much of this effort eludes the average aircraft owner, too. Countless times Ive heard sad tales of five-digit annual inspections for what are simple airplanes with simple problems. One facet of this phenomenon involves some basic misunderstandings among owners regarding what constitutes an annual inspection, helped along by the chosen shops liability insurance and/or repair station status. There are many reasons, of course, for annual inspection sticker shock.

But the overall problem of balancing ownership of a personal aircraft against the time and expense of doing so often is weighted toward throwing money at the problem. To a great extent, its understandable: Having available the resources to own the airplane in the first place means one must be more productive than the average person. Keeping ones productivity at the high level needed to afford an airplane means not getting bogged down in sourcing 40-year-old airplane parts. Its a vicious circle.

And throwing money at a problem doesnt mean it gets fixed right the first time. Just as your car dealer can sometimes screw up and not fix the problem, aircraft maintenance shops, avionics installers and other specialty facilities can send you on your way without getting it right the first time.

But theres no way I could afford this airplane if I had to lay down an aviation maintenance unit (AMU; currently valued at $1000) each time something went wrong. One of the ways I keep my wallet from staying empty is to roll up my sleeves and dive into the maintenance aspects of ownership, at least as far as spending time on the phone to source parts and ensure they arrive in the nick of time.

Does knowing the airplane inside and out make me safer? It cant hurt. But I wonder about owners of other older airplanes and how involved they are. Very few airplanes fall out of the sky from maintenance issues, but related accidents do happen. I suspect maintenance costs-along with fuel prices-mean they just dont fly as often.

What are your thoughts? Let us hear from you.