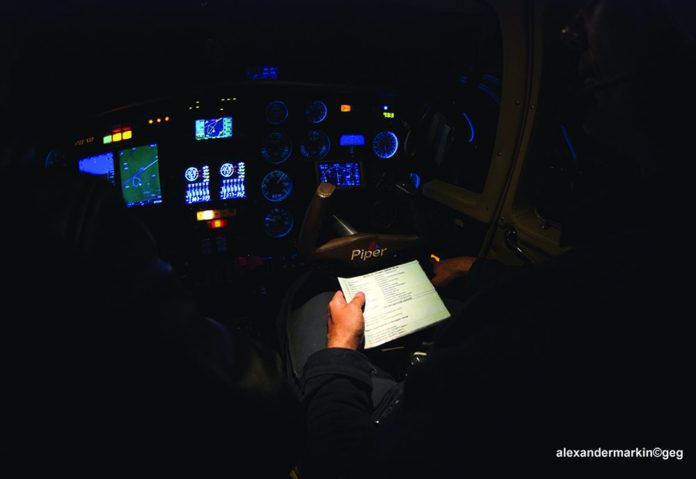 When it’s time for the instrument rating—the thinking rating—the instructor’s obligation ratchets up a few notches. An instrument-rated pilot is potentially going to be flying in high-risk environments—night IMC, ice, thunderstorms, approaches to a mere 200 feet above the unforgiving ground—with high workloads and in complex airspace. The instrument instructor must take a VFR pilot—who may have a casual attitude about checklists, systems, weather and risk analysis—and teach some respect for those subjects. He or she must impart the knowledge and skill needed to stay upright in awful weather, plus develop the savvy needed to think so far ahead of the airplane that the pilot is ready for whatever nature, ATC or system failures deal out.

Unfortunately, a certain proportion of instructors—generally, the time-builders who are aiming for an airline job—would much rather be elsewhere. The quality of their instruction and the instrument-rated pilots they produce shows it. And no matter where you go for instrument instruction, there’s a risk of drawing a CFI-I with whom a trainee just can’t get along. What should an instrument student expect from his or her instructor? What criteria should an instrument student use to measure whether the CFI-I is living up to those expectations? These are complicated questions, but they can be broken down into five basic areas instrument student should evaluate to ensure their instrument instructor is the right person at the right time.

In my opinion, an instrument student has every reason to expect greater professionalism from their double-I than they may have received from their primary instructor. The corollary is the CFI-I’s obligation to the student is greater, and the instructor has the responsibility and duty to put the student’s interests first at all times during the instructional relationship. The student also has greater obligations; see the sidebar.

One example of the kind of professionalism I’m thinking about involves potential schedule conflicts. For example, if a CFI-I and a student agree on a time for a lesson, the double-I has a duty to be there, on time and prepared for the lesson. It’s never appropriate for an instructor to stand up a student. While there will be instances in which a CFI-I gets an offer to do some very cool flying conflicting with a scheduled lesson, the appropriate first response is to see if that flying can occur some other time. If not and the flying has the potential to enhance the student’s experience, perhaps he or she can come along on the flight, even if they can’t touch anything.

If not, and only if the CFI-I knows the student well, the instructor is entitled to contact the student, explain the situation and see if he or she is willing to reschedule. It always is the student’s call, because of the instructor’s pesky professional obligation to the student. And it’s never appropriate to do that sort of thing more than once with any given student.

If a student has an instructor who makes it a habit to reschedule because of other, cooler flying, it’s time for a heart-to-heart with the CFI-I—there may be a more serious underlying problem. (Breaking the CFI-I’s kneecaps is considered an overreaction and poor form.)

The instrument instructor also should be willing to give dual in IMC. That’s because the best time for an instrument pilot to first experience an approach to minimums, a circle-to-land approach in two-mile visibility or transitioning to the gauges about the time the gear hits the wells is under controlled conditions with their CFI-I in the right seat.

I explored this topic in much greater detail in the May 2015 issue, but while I have your attention, a CFI-I should be proactive in this area: He or she should contact instrument students to see if they can come out and fly when the weather goes down. This way, students have a better chance of getting experience in the clag before going for the checkride, or piling in their family for everyone’s first taste of IMC afterward.

A CFI-I always should be willing to listen to the student. Listening to questions asked is one of the best ways to tell if something has been missed in a student’s training. It means listening to the student’s concerns and fears, taking them seriously and addressing them professionally.

As a fundamental part of the CFI-I’s responsibility to communicate with the student, the instructor has a duty to take the time to discuss the flight in appropriate detail afterward. It is a part of the learning process to review each part of the flight and evaluate it objectively and honestly. Whether or not the training program has a formal grading system, the CFI-I has a duty to evaluate or grade the student honestly. I’ve seen far, far too many programs where the instructor just grades everything “satisfactory” or “average” or “above average.” That’s lying to the student.

The student is entitled to know how well he or she did on an objective scale linked to the completion standards for each flight operation, and that scale has to have been established prior to the flight. If nothing else, if the student later crashes upon entering IMC for the first time, and the instructor is placed on the witness stand, how is he or she going to explain an “above average” grade on attitude flying?

An instrument instructor has a duty to be an advocate for the student. The need for advocacy may not arise, but if it does, the CFI-I always should stand up for the student in an honest fashion in dealing with FBO management, the FAA, maintenance personnel, insurers or others. It also means encouraging the student when a lesson has not gone well. Sometimes they don’t go well, but it doesn’t mean the student cannot earn the instrument rating. It may mean telling a spouse that the student is flying in a safe and responsible manner, if it is true. (Being an advocate does not mean lying for a student at any time).

The advocacy role extends to conversations about the student with others. For example, a responsible and professional instrument instructor will never discuss a student with another instructor in circumstances where others can overhear. If an instructor feels the need to speak with another instructor about challenges a student poses or to exchange ideas on how best to teach a particular person, the discussion should take place in private. Instructors simply sitting around and chatting about their students, especially if names are named, is always unprofessional.

A good CFI-I is always learning. No matter how much experience they have, good instructors never believe they know it all and are always willing to learn from others, especially from their students. This especially involves staying abreast of the latest avionics equipment, including new cockpit gadgets like electronic flight bags (EFBs). Don’t be surprised, however, if the instructor occasionally “fails” your EFB with the idea of training you to think on your feet and overcome typical cockpit hurdles.

If your airplane has a glass panel, for example, but the double-I won’t teach in it because he or she thinks you need to learn steam gauges first, that’s a great reason to find another instructor. Ideally, an instrument student would be exposed to both panel types, and perhaps decide on their own in which they prefer to train. And it’s always a good idea for instrument students to be exposed to both, so they know where the challenges are and get someone else’s plane on the ground in a pinch.

Likewise, it doesn’t do much good to focus on NDB or VOR approach procedures—if you can even find them these days near your home plate—when you’re flying behind an approach-approved WAAS GPS navigator.

An CFI-I has to recognize that occasionally there are personality conflicts between an instructor and student. While the situation is pretty rare and an instructor who has a professional attitude can overcome most minor difficulties, from time to time things simply do not click and the two cannot get along. Unresolved personality conflicts always adversely affect the student’s progress. If the situation develops, the instructor should never take it personally, but should simply arrange for the student to fly with another instructor.

And it’s a two-way street. Sometimes a student who is having a great deal of trouble getting along with his or her instructor may be reluctant to say so. The student will either not do well during training or may just quit flying rather than deal with the issue openly.

If your instrument instructor is not providing training to these professional standards, find one who will. You’re the client, you’re the one spending your hard-earned money, it’s your training—and your life—on the line. You are entitled to the best instrument instruction you can find.

Rick Durden is an ATP and CFI-I who has been giving instrument instruction for over 40 years.