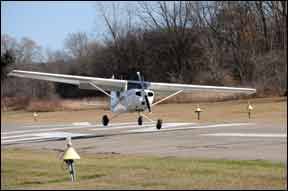 One of the rewards from operating personal aircraft involves meeting and overcoming challenges, particularly those self-induced by targeting an outcome and nailing it. Many pilots feel an understandable sense of accomplishment with spot-on flight planning. “Got it within two minutes!” one close friend exclaimed a few weeks back about an ETA. Others get seriously into predicting their fuel consumption,

then comparing their flight-plan numbers to those on the fuel truck.

My aviation upbringing valued many factors, but my mentors were a little like drill sergeants over accurate landings. That meant nosewheel (or tailwheel) on the centerline, inside the touchdown zone, ideally within an airplane length of the threshold paint. They preached the benefits gained when you can pick and then hit a designated spot on the runway: Precision-landing skills become handy when you need to squeeze into a field-think engine failure, fuel exhaustion or fire. As with many other operations, accurately landing an airplane can be broken down into a number of elements.

Picking, identifying and committing to a touchdown point, then flying the airplane to achieve that outcome is the essence of accurate landings. But were not talking about merely tooling around the pattern and, after turning final, identifying the intended touchdown spot of that moment: That stationary spot on the ground simply growing larger in the windshield as you slide down toward the runway is a wildcard pick. It doesnt count.

Instead, identifying the intended spot from the downwind-or earlier-and hitting it with precision and repeatability is the name of the game here. All the while you need to remember: Precision landings are an all-axes, all-systems process. Youll need to vary pitch and power to adjust glidepath and maintain approach speed, use the ailerons and rudder to compensate for crosswinds and keep you on the centerline, then using gear and flaps to augment your descent control.

Aiming for that spot and remembering youll overfly what moves toward you and down in the windshield, and youll be short of what moves up and away from you in the windshield is part of the game. You want to keep your target in between, where it doesnt move up or down-and only grows larger.

Pilots with a commercial certificate tucked safely in their wallets may have their own opinions about spot landings, or accuracy landings, or whatever you want to call them. Non-standard and unplanned arrivals take up a significant portion of the commercial practical test standards. The polished spot-landing practitioner should have little trouble clearing those items on the checkride.

For pilots with soaring experience in sailplanes or hang gliders alike, its an old familiar procedure. For so-called power pilots, its something they must learn and demonstrate. The procedure embraces some of the techniques already discussed, but arranged and executed a bit differently. In this theoretical forced landing, the goal is to clear a ditch across the landing surface-but clear it by as little as possible-and stop as quickly as practical.

Some CFIs-including my private and instrument instructors-considered this exercise an opportunity to also demonstrate emergency engine-out landings. It goes this way:

After the power loss, slow the airplane to its best glide speed to preserve altitude and options;

While descending, search for and identify a suitable landing area and steer toward an entry into a downwind leg for it;

While passing abeam the target spot, begin a 180-degree turn toward the spot, deploying whatever flaps and other drag devices (like landing gear) are needed;

Slip or skid as necessary to keep the airplane on target for the spot and the centerline;

Touch down without stalling-hopefully on the target.

In practice, as in a real-world emergency, we use ground indications-ripples on water, smoke from chimneys, etc.-to determine wind direction and velocity, and choose the field accordingly, landing upwind.

In the checkride world of most examiners, clearing the imaginary ditch and touching down within 200 feet would be passing, though I know one wholl push for within 100 feet. “Theyre commercial candidates, for Petes sake-they should be good at this,” he told me.

The same technique, of course, underpins any accuracy landing, but without the crisis emphasis.

Theres no bad time, really, to practice precision-landing skills-weather and traffic, permitting, of course. Whether youve just finished a cross country, or youre out for a $100 breakfast/burger, or simply converting fuel to motion with some bumps and circuits, every landing can be an opportunity to spot land. Lets take the technique outlined above and put it to use under normal circumstances.

Youre at pattern altitude and in the downwind:

Pick your target spot on the runway before passing abeam the arrival end-the threshold marks or any identifiable spot beyond the runway end;

Traffic permitting, begin a descending 180-degree turn to final, keeping your eyes moving between watching for traffic, the panel and the target, without losing a clear view of that spot;

Adjust pitch and power to maintain just below normal approach speed-my starting point when learning a new plane is usually 1.2 x VSO-while keeping the plane above stall speed and the target just above the stationary spot in the windshield; making the aiming point about 150 to 200 feet before the target point should get you a touchdown very close to your target in the average light airplane-adjust as necessary when flying heavier birds, or those with high wing loading.

Deploy flaps and/or slip as needed (but only if and as approved for the airplane) to maintain that targets relative position;

Reduce power and pitch up just before youd arrive-youll likely float a few feet and come down either on, or slightly past, your target.

First, regardless of your technique, theres that ground-effect “thing” to work out for your particular aircraft. As you remember from primary training, ground effect comes into play when the wing is within its span above the ground, effectively reducing drag, increasing glide ratio and lengthening your final glide to touchdown. Arriving with excessive speed exacerbates the problem of ground effect, which at 1.4 x VSO and faster adds considerably to the runway needed.

High-wing aircraft suffer less from ground effect than their low-wing brethren; similarly, low-wing airplanes with particularly short gear legs-Im talking in particular to Comanche and Mooney drivers-suffer even more than, say, a Bonanza. But high-wing airplanes with huge Fowler flaps can float way more than we want when those flaps are fully deployed, reducing sink momentarily and adding to any tendency to float in ground effect if too fast.

As one result, many instructors and mentors teach their students to deliberately aim a few feet ahead of the desired spot; not a bad practice, as long as that aim doesnt result in being too low to overcome any unexpected sink or turbulence.

Flaps work in two directions, of course, and its acceptable to retract as well as extend them in the name of hitting the spot. Ditto for the gear in a retractable: In a pinch, such as a true emergency, I wouldnt hesitate to keep the wheels tucked away until the last minute if it helped assure my arrival at the desired spot. Absent a real emergency, though, its best to practice putting them out on downwind-of wherever your normal procedures dictate-before starting the 180-degree turn and leave them out, lest your focus on the spot lead you to neglect that all-important switch.

But if gear-out hurts the situation, put them away again-as long as you know that when needed you can get them back down in time. Know thy gear cycle; know it to the second.

And we mustnt neglect controllable props. In any accuracy landing exercise other than an engine-out drill, using power, pitch and rpm are fair game for keeping your target where you want it; raising rpm can act like a brake at low power settings, increasing your descent angle without increasing airspeed.

And always remember: The goal is to land as closely as possible to a target, to dust the chalk or tire-mark the paint, or however you gauge success-a goal, not a court sentence. Outside an actual crisis, continuing to pursue that goal should not continue past the point of breaking something.

That particularly goes for avoiding coming up short. If your set-up makes you fearful of landing short of the pavement, well, theres less penalty in a go-around than in losing a bet. In fact, theres no rule that says the target has to be so close to the runway threshold that failure to be long enough means being short.

At the least, crank up the power anytime you feel an approach isnt coming together safely. If low, let ground effect help save you from a fate worse than missing a spot. If too high, well, decide whether to miss long or to go around altogether.

Putting It On The Mark

Remember: The goal of practicing is one part self-satisfaction, one part confidence-building and eight parts salvation. Thats especially true if ever you truly need to hit a target without hitting something else.

Learn several techniques, but dont mix them up on a single approach. Practice each one to completion and pick a new one as you turn downwind. Practicing and perfecting your accuracy will make you feel good about your flying.