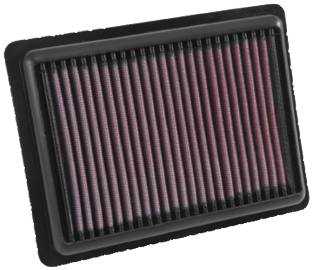 The gasket on the back side of a K&N induction air filter (p/n CP0711) came loose and was sucked into the engine, causing it to stop running. This air filter is not an OEM product and was installed with an STC and logbook entry. A different company had the same problem, which resulted in AD 96-09-06. Called company, which said they had no problems.

Customer reported uneven idle and erratic EGTs on all cylinders and an in-flight engine shutdown. Troubleshooting revealed a filter (Donaldson p/n P108421) we replaced at annual had lost its inboard felt seal. Particles were found throughout the induction system and fuel injectors as well as the intercooler. Components were removed for cleaning. The seal on the filter must have had only low/partial adhesion, as remaining seal was found to also be partially bonded. New filters purchased for other aircraft showed less than 50 percent bonding of the felt seal.

Split At Seam I

During a scheduled inspection, the air filter was discovered to be split open at the seam. This same condition has been found on several other air filters of the same p/n (Brackett BA24). While not an immediate safety of flight issue, this condition allows unfiltered air to enter the induction system. If allowed to continue for any length of time, this can cause premature wear and possible early failure of the engine.

Air filter found split open at glued seam during annual inspection. Split area comprises 4-6 sq. in. of unfiltered air path to engine induction system. This is the second filter element (p/n BA24) this inspector has found on this type of filter element.