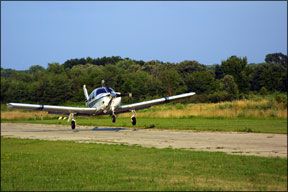 Early on in my flying career, taking off automatically meant, absolutely free, one mandatory dead-stick landing. Thats because I was flying hang gliders and developed an easy appreciation for fitting into small spaces. Later, after someone thought to put a small engine and propeller on one and dub the results an ultralight, my well-honed, dead-stick landing skills proved handy too frequently.

Thankfully, the engines used on ultralights in those early days have improved greatly but-like a catchy tune you just cant shake after hearing it on the radio-I still think in terms of whether a nearby field is large enough for landing. Coincidentally and for the same reasons, short-field takeoff skills with an ultralight received equal attention. After all, once you “land out” in an ultralight and resolve whatever caused the engine to fail, you still need to get back to the car. Best of all, the better our short-field skills, the more options we had for operating, powerplant status aside.

Once I moved up to flying larger, heavier, faster airplanes, those same instincts came with me, as did the comfort of knowing I had the ability to safely operate from fields that might make a knowledgeable passenger utter an audible, “Whoa….”

Its yet to happen to me in a “real” airplane-knock wood-but nowadays the thought of an engine problem is a lot less stressful. Although speeds and techniques vary quite a bit when compared to a powered kite, the planning skills and mental focus necessary to pull it off remain the same.

Another real plus: knowing instinctively the capabilities of ones machine. The ability to precisely put the plane through the correct steps remains key. No matter what class of aircraft were talking about, the goal is consistent: successful, safe short-field transitions.

My primary instructor loved teaching a student with a few thousand hours in what he humorously labeled “alternative” aviation-those hang gliders and ultralights in which I cut my teeth. Since, in many ways, I was a “transitioning” student, he took a two-pronged approach to my training.

First, he focused on imparting the skills and knowledge needed to meet the FAAs Practical Test Standards (PTS), preparing me for the check-ride hurdle. Second, he also spent considerable effort teaching me “real-world skills,” emphasizing that knowing how to fly to the PTS was mandatory for the check ride, while knowing the other stuff would make me a smarter pilot.

Short-field and soft-field techniques were among those double-sided skill sets.

The initial task he beat into me when planning a short- or soft-field operation was to develop rote familiarity with the airplanes VS1, VSO, VX and VY speeds. The former two, of course, are stall speeds-“clean” and “dirty,” respectively.

Meanwhile, VX, for those few who need a reminder, is the best angle of climb speed, the indicated airspeed producing the most altitude per linear foot traveled. Similarly, VY is the best rate of climb speed, and yields the most vertical gain over time. The VY speed, of course, generally is higher than VX, although the two can intersect and become one at or near the airplanes service ceiling.

Knowing these by heart meets only half our needs; you also need the ability to hit, hold and maneuver at these speeds: We also need to configure the airplane for short-field transitions.

For example, does the book call for flaps? If so, how much? At what gross weight and combination of pressure altitude and temperature can we expect to clear obstacles at the far end of the field? Any other technique tips in the POH? These and other critical bits of information are there, in the POH, available for the asking.

A second task my instructor pounded into me was to practice the skill sets we were developing. That practice should include perfecting the ability to fly and hold VX and VY, within a tolerance of -0/+5 knots or mph.

Practice also should include the most-realistic environment you can find. Put another way, avoid practicing short-field ops in your flivver from a 5000-foot. Doing so is sort of like kissing your first cousin: It has limited value. Yes, perfecting the basic procedures and skill set is safely practiced from the longer, more-forgiving runways at Behemoth Muni or Got Lotsa Pavement Regional. But to truly understand the benefits of your practice and gain real experience from it, you need to crank up the volume.

In no case, of course, did my primary instructor advocate putting myself into a position that overly challenged my fledglings skills. And were not doing so here, either. But we do suggest making your short-field practice as close to real-world as safely possible. Part of the practice, of course, is pulling out the POH to learn what is and isnt possible well before turning final.

This regimen made my training as realistic as it gets and helped build confidence. When my examiner took me to one of my practice fields during the checkride-a sod strip still soggy from thunderstorms two nights before-my biggest worry was satisfying his PTS-guided expectations.

Both require a pilot to weigh all the same elements wed expect for any normal launch or landing: density altitude, runway length, winds, weight and the aircrafts configuration. Before even turning the key for a short-field takeoff, the smart pilot spends time determining what the aircraft is supposed to be able to do. (This is where we insert the obligatory admonishment: POH numbers were developed with the aircraft lacking such drag inducers as antennas and included an experienced pilot with a fresh engine and prop. Your mileage may vary.)

After some quality time with the POH, the pilot should reach a conclusion about the actual feasibility of the airplane in those conditions. Should that exercise hint or even wink at a negative answer, consider packing it in for the day, waiting for better conditions or changing some other parameter-such as weight-to ensure an adequate margin.

Finally, establish in your mind a no-go decision point where you abort the effort if not airborne. Barreling down the runway at speed mandates one of two things: flying away, or stopping before its too late and the runway ends.

According to the standard advice, we should take the runway as close to the end as possible, leaving none behind. No quibbling with that. Then, the FAA recommends a full-power, brakes-held run-up and releasing the brakes.

Holding the airplane in as neutral a pitch angle as possible-to minimize drag and maximize acceleration-wait until the airspeed needle shows 1.2 of VSO. At this point, rotate smoothly to hold VX, only accelerating to VY after reaching 50 feet above the ground.

…vs. The Right Way

Looking back over that, there are a few things hinting at a committee effort, one in which opinions and feelings were averaged to reach a median view. Instead, lets examine an alternative many believe works better, is less compromising and more real-world.

After conducting all the necessary pre-departure checks at the run-up stand, taxi as close as possible to the runway end, turn onto the centerline and smoothly, quickly apply full power. Using the momentum you have from taxiing, youll likely accelerate a little more quickly. And accelerating more quickly to the target speed is a good thing.

On the next step, do you really need to clear that mythical 50-foot obstacle at the end of the runway? Or, are you just trying to get off a truly short runway as quickly as possible? The techniques for these scenarios differ.

For clearing the obstacle on an otherwise long-enough runway, do hold the airplane neutral and accelerate to VY, then swiftly and smoothly pitch to 1.2 VSO. The result will be a sharp, steep climb angle that uses some of the excess energy youve accumulated in the takeoff roll and quickly put you above the 50-foot tree at the runways end. Without the obstacle, accelerate to 1.2 VSO, smoothly break ground, then accelerate to VY and climb away. Simple, eh? You do need to precisely manage airspeed, which means precisely controlling pitch.

If youre at no risk from trees, terrain, towers or other unfriendly objects, climbing at a shallow angle harms nothing and greatly improves your view, as well as engine cooling. And if youve got an obstruction threatening, do you really care that the takeoff roll is longer when the payback is a steeper climb?

When landing on that same short strip, many things work the same way; airplane configuration and nailing your airspeed, for example. The biggest exception is using power to manage descent angle and tightly hold your speed. Arriving at a field thats otherwise long enough but with an obstacle at the arrival end, slow the airplane to 1.2 VSO and adjust power to control the glide. Once clear of the obstacle and nearing ground effect, put the nose down slightly, ease back the power and then time your flare as late as possible.

The view can be disconcerting as the ground seems to be rushing toward you. Thats one reason it pays to brief newcomers to the technique. On a good day, my Comanche could easily fit into Westport, Kan., touching down just past the displaced threshold and getting stopped by midfield. Thats using about 1100 feet of the available runway.

For those short fields absent any obstruction, I fly a shallow approach with appropriate flaps that keeps me clear of normal obstacles, managing power to hold the glide, and arriving over the threshold at no faster than minimum controllable airspeed. With the runway end growing larger in the windscreen, lift the nose to VSO as you cut power to idle and grease it in in a full stall.

Done right, on even the shortest runways, brakes are optional: Let her roll to the runway end unless you get your kicks from showing just how little runway you need.

ONE Size Doesnt Fit All

Of course, these suggestions arent necessarily PTS-compliant. But were all pilots here, and we should be trained to make decisions on which technique is most appropriate, not just those found in the PTS. The idea is to squeeze out of our airplanes every ounce of capability. Use these techniques wisely and and youll find a whole lot more runways available to you-and gain a lot of pride of pilotage in your ability to use them safely.

Now, go forth and practice. And take a safety pilot-someone whose eye size will let you see how well youre doing.