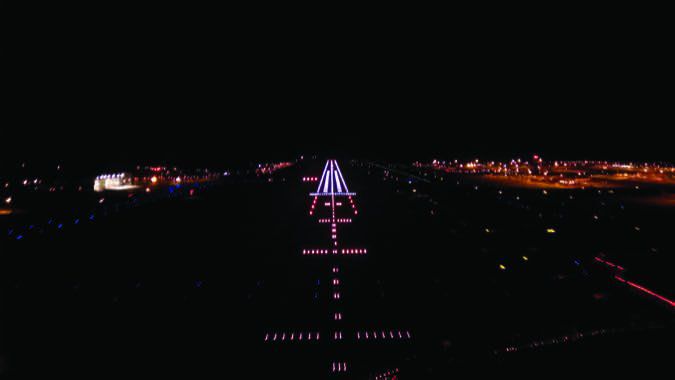 Over the years, I’ve flown in and out of a specific airport on numerous occasions, day and night. It’s a well-equipped facility, featuring a tower and a local approach control, along with scheduled service, multiple gates, two full-service FBOs and three runways. The nearby attractions are interesting when I want to stop, the food choices are excellent and the airport is a great choice for conducting practice approaches. There’s only one problem: I can’t find it at night.

The first time I encountered this problem, I was flying a borrowed airplane, building time. I arrived from the south, and the runway in use required reversing direction. I was very close in on a visual approach before I spotted the airport’s relatively weak beacon and, as I complied with the controller’s vectors, I wound up on a high right downwind. As I flew parallel to the runway, I finally was able to spot it. I completed the right-hand pattern and touched down without further ado.

The second time, I also was approaching from the south. The runway in use allowed a straight-in visual approach. Once again, I had difficulty spotting the airport beacon. This time, however, I had loaded the runway’s RNAV approach into my GPS navigator and had much better situational awareness. I also zoomed in my EFB’s presentation to unambiguously depict my position relative to the airport and its runways. Still, I was close in, high and hot, when I finally spotted the runway. Again, the landing and touchdown were uneventful.

But what the heck? This is the only airport at which I have such a problem. What’s going on? I spent some time considering my difficulties and some solutions. What I came up with isn’t revelatory, but it is instructive.

First, the airport’s beacon seems weak, making it difficult to spot among other flashing ground lights nearby. It’s also sited in an open area at the airport’s southern boundary. I’d think that would make it easier to spot, but in reality it doesn’t stand out from other lighting in the area.

Second, the airport is outside the city it serves, and not surrounded by brightly illuminated structures. The lighting for the industrial area adjoining the airport tends to blend in with its surroundings, making even the symmetrical runways and approach lighting systems seem part of the landscape. Finally, and even though I had been using supplemental oxygen on the second flight, it’s likely my eyesight isn’t what it used to be.

With these observations in mind, I’ve resolved to be extra careful when approaching an airport at night, especially this one. Zooming in the EFB definitely helps for orientation, as does loading an appropriate approach into the avionics. Remaining high until I’m assured I have the correct runway in sight and can descend to it without danger of hitting an obstacle is my final defense mechanism.