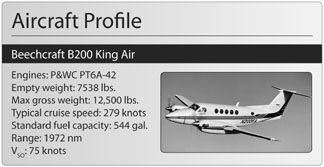 In aviation, perhaps more than with any other activity, there is really very little thats new and different when it comes to accident causes. If we fly only on calm, VFR days, pay excruciating attention to our training and proficiency, and operate only new airplanes with the best possible maintenance, we have a good chance at living long enough to know ahead of time which flight will be our last.

The reality is that we often cut corners. Sometimes were forced to fly in poor weather. And sometimes stuff breaks while were airborne, though the failure itself usually isnt fatal. Which leaves the pilot-you and me-as one of the final and most significant links in the chain leading to an accident.Break that link-prevent it from affecting the outcome of the flight-and our chances of soundly sleeping in our own bed that night skyrocket.

Combine poor weather with poor piloting, and thats when the soft stuff hits the fan. Just as some handful of pilots each year decide that flying into a thunderstorm is the wisest course of action (it never is), some other handful are so focused on getting home to their own bed or making a buck that they cut corners. At the end of a long day, and sometimes in preparation for one, they decide the end result of being when and where they want to be justifies flying into the fog bank shrouding the mountain, descending into haze the same color as a broadcasting tower or cutting some other corner. In these pages, we frequently have the unfair opportunity to dissect their final few moments-its unfair because we have the luxury of knowing how things came out.

While there are more egregious errors a pilot can commit, few offer more history, are easier to avoid and are as simple to identify as busting minimums on an instrument approach. After all, the procedure is right there, printed on a piece of paper, and offers well-designed drawings and easy-to-read text describing how to fly the approach.

Another area where errors are often made is in complying with regulations.Given the number of rules by which were supposed to fly, it has been said that no one can conduct a single flight without breaking at least one of them. Thats a bit of a stretch. Most of the rules governing aviation are really minimum standards. Were free to exceed the standards they set, but its usually not a good idea to set the compliance bar any lower. Thats especially true when it comes to who is qualified to fly what airplane and when, as well as when considering the question of being fit to fly.

Background
On December 4, 2003, at 1940 Eastern time, a Beech B200 King Air collided with trees and the ground then burst into flames while on a localizer approach to Runway 32 at the Newnan Coweta County Airport (COO), near Morlan, Ga. The approach culminated the deadhead portion of a Part 135 on-demand air taxi flight and was conducted under Part 91. Instrument conditions prevailed and an IFR flight plan was filed. The Commercial pilot in command and Airline Transport pilot serving as co-pilot received fatal injuries; the airplane was substantially damaged.

The reason the ATP-rated pilot was in the right seat involves an accident that had severed several fingers from his right hand. The ATP had undergone surgery to have them reattached and was experiencing some difficulty in operating the airplanes engine and propeller controls from the left seat.

Other than the ATPs physical limitations, nothing remarkable about the flight appears in the NTSBs report. Soon, it was cleared for the Localizer Runway 32 approach at COO. The pilot acknowledged the clearance and a review of radar data revealed that the airplane was on course and aligned with the runway when the accident occurred.

Witnesses stated they heard the pilot announce over the Unicom frequency 10 miles out on the approach to Runway 32. The witnesses stated that they looked at the weather computer and saw that the ceiling was down to 150 to 200 feet and they were wondering, who was attempting to land at that time, since the minimum descent altitude for the approach is 325 agl. The witnesses never heard any other radio calls from the accident airplane. The airplane crashed one mile south of Runway 32, in a densely wooded area.

Investigation
For this flight the ATP-rated pilot enlisted the help from one of his employees to sit in the left seat and manipulate the controls. He was an Instrument-rated Commercial pilot, but had not been checked out in the airplane and was not current on instruments to fly in the left seat. The Commercial pilot was listed as the pilot-in-command of record on the IFR flight plan.

A review of the Part 135 operators records revealed the pilots most recent Airman Competency/Proficiency Check was conducted on January 11, 2003, in a Cessna 210. There were no records of the pilot having any other checkrides since then, nor were there records showing a flight-check in the accident airplane, as required.

A similar review of the co-pilots information revealed an experienced pilot who was type-rated in the A-300, DC-9, B727, B757 and the B767. He was a Flight Instructor, Flight Engineer and Airframe and Powerplant Mechanic.Additionally, he was president of the Part 135 operation and was the companys check airman.

Reported weather at COO near the time of the accident included visibility of 1 miles and a ceiling at 200 feet overcast. Similar conditions were reported nearby.

All major portions of the airplane were found in the wreckage and flight control cable continuity was confirmed. The landing gear was found in the retracted position while the flaps were at least partially extended. There was no evidence of a pre-impact engine failure.

Probable Cause
The NTSB determined the probable cause(s) of the accident to include The pilots inadequate in-flight planning/decision when he continued the flight below the decision height and collided with trees. A related factor was the low ceiling. But which pilot?

While the NTSBs finding seemingly covered the reasons the airplane descended below the published MDA for the approach, it doesnt spend much time on why the left-seater was listed as the flights PIC, nor the right-seaters insistence on flying with a known medical deficiency. Putting into the left seat of a King Air someone who apparently isnt competent on instruments-or the airplane-and then knowingly shooting an approach in weather below minimums is asking for it.

The NTSBs report doesnt address the question of who was flying the airplane from which seat earlier in the day, when the King Air was operated under Part 135 with paying passengers. Neither does the probable cause question the experience and abilities of the left-seater or the medical shortcomings with which the right-seater was working to cope. Finally, its impossible to know who was actually flying the approach.

What is known is that the right-seater displayed a willingnes to cut corners, those related to his own abilities, that of the left-seater and the weather. Cutting too many corners at the same time is asking for trouble.

Also With This Article
“Danger Zone”