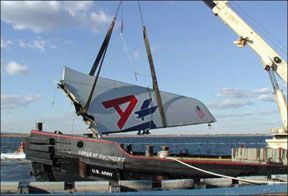 I wont trivialize the horror with a fictionalized account of in-flight structure failure; we all shudder at the mere thought of it. But most in-flight breakups follow identifiable patterns. We know how and why they happen so we can learn–and practice–techniques to avoid them.

Spiral Tendency
Pitch-stable airplanes will attempt to maintain a constant air flow over control surfaces. Pitched upward (without a power change), they will decelerate; reduced air flow over the elevator and trim tab causes the control to move so that the airplane pitches back down, regaining speed. When its nose is pushed downward, the pitch-stable airplane will accelerate. The change in air flow causes the airplane to pitch back upward, again to return to the trimmed airspeed. As long as the airplanes wings remain relatively level relative to the horizon, the pitch-stable airplane will seek to hold a pitch attitude and/or altitude. Allow an excessive bank, however, and this ultra-desirable pitch stability conspires to plunge the airplane into a disastrous flight regime, with an ISF often the result.

Remember when you first learned to fly steep turns? Your instructor probably told you about the overbanking tendency-the natural tendency of a wing to continue to bank further and further if banked to more than about 30 degrees. This happens because, beyond a shallow bank, the angle of attack differs enough between the two wings that the airplane will not naturally right itself. You have to correct for overbanking tendency by applying a little opposite aileron in a steep turn.

In any situation where a pilot allows the wings to bank beyond about 30 degrees without correction, the wings will continue to bank. This reduces the vertical component of lift, so the airplanes nose drops below the horizon.Airspeed builds and air flow increases over the elevator; the pitch-stable airplane pitches up to regain its slower, trimmed speed…except that it pitches up relative to the airplanes vertical axis, not the horizon; with the wings at a steep bank this simply pitches the airplane steeper toward the axis of its nose-down turn. The airplane enters a spiral, a regime of ever-increasing bank and ever-lower pitch attitude, tightening and accelerating precisely because of the otherwise desirable stability that makes it so enjoyable for instrument or cross-country flight.

Spiral Recovery
Recognize youre in a spiral and you often have the opportunity to recover. Done correctly it will avoid an ISF (or high-speed impact) and save your life. Do it wrong, however, and your recovery attempt may actually hasten an ISF. Why? It goes back to the stable airplanes tendency to seek its trimmed airspeed.

Lets say youre steeply banked, nose down at a high speed, in a developing spiral. If you panic and pull back on the controls (to pull up) youll only aggravate the spiral. To recover from the spiral you need to level the wings. When you do so the airplane, pitching up (relative to the airplanes vertical axis) to return to its trimmed airspeed, will pitch up relative to the ground as well. Trouble is, if the airspeed is already great, the airplane will pitch up aggressively. It doesnt know how hard to pull up, just that it is very fast and needs to get slower now. Left unchecked the pitch will increase so rapidly that G-forces build in the reversal, forces so strong that they exceed aircraft design limits. An incorrect spiral recovery, whether by pulling back on the controls or leveling the wings and letting the airplane recover on its own, may be as bad (or worse) than doing nothing.

An example of how a spiral recovery can go wrong involves a Cessna 210 that broke up in flight. Recorded radar information showed the airplane cruising at 3500 feet. Moments later, its heading had changed more than 180 degrees and it descended to 1300 feet. The aircraft went another mile before it again reversed course and climbed. The last radar hit showed the airplane at 4600 feet. Thats when it broke up and fell to the ground.

For some reason, the airplane entered a rapid descending turn. The pilot evidently attempted recovery and the airplane shot well above its assigned altitude. The pitch-up must have exceeded the Cessnas design envelope, however, because its structure failed.

This is a common pattern in ISFs where the airplane was on radar at the time of break-up. What usually follows is either another excursion into a nose-low unusual attitude or a break-up in the climb.

Out-of-the Envelope Flight
Another cause of non-fatigue ISF is attempted flight outside the approved flight envelope. Airplanes are designed to be as light as possible for maximum performance and load-carrying capability within the design envelope.Take that airframe even just a little beyond limits and it may not handle the strain.

Even if the airplane doesnt break right away, metal remembers, as the engineers say, and the effects of envelope excursions are cumulative over the life of the airplane.

Flying at or beyond the design capability of the airplane over years or even decades (an operational life the original designers likely never anticipated) will accelerate normal fatigue patterns phenomenally and may lead to an ISF even when the airplane is being flown (at the time) well within its envelope.

Metal Fatigue
Some ISFs can be traced to airframe fatigue. In these cases, the accident airplane is almost always found to have been operated in an extraordinarily stressful environment that has significantly accelerated normal fatigue.Often, the airplane was in an approved crack inspection program that was not sufficient to find the fatal damage (or was not correctly performed).Sometimes, fatigue appears to have been the result of improper repair or modification. Corrosion, an environmental factor that sometimes (but does not always) correlate to calendar age, further accelerates airframe fatigue. The sidebar at left details some recent and notable fatigue-related airframe failures.

All metal will eventually fatigue, and in most cases it appears use patterns and maintenance history can dramatically accelerate fatigue in individual aircraft. We may be on the verge of FAA-mandated inspection programs to continue to operate airplanes indefinitely. Regardless, history suggests we should be operating airplanes more and more conservatively as they accumulate hours to avoid the horror of an in-flight structural failure.

Unknowns
In late May 2006, a New Piper PA-32R Saratoga SP shed a wing while descending for a landing at Kansas City, Mo. Information on this double-fatality mishap is still very preliminary at the time of this writing, but this tragedy is distinguished by its complete lack of similarity to classic ISF patterns.

The flight was descending in visual conditions and did not exhibit any radar-track steep spiral pattern. The airplane was virtually new (by current standards)-it was a 1999 model with only a little over 500 total airframe hours. It appears the airplane was flown conservatively within its design flight envelope throughout its short operational life.

The possible focus of investigation might next be the manufacturing process of this specific airplane. Theres no evidence that production practices brought down this Saratoga, but it might be a factor since to date none of the traditional contributors seem to apply.

Avoiding an ISF
History shows that ISFs almost always result from pilot-induced factors or operating the airplane outside its design envelope. To avoid the horror of ISF, then, keep these guidelines in mind:

Always fly well within the design envelope of the airplane. The more time there is on the individual airframe, the more conservatively you should fly the airplane.

Get and stay highly proficient in instrument flight.

Give thunderstorms a very wide berth. Do not attempt to penetrate areas of thunderstorm activity unless you can remain at least 20 nautical miles from thunderstorm cells.

If youre flying under visual flight rules stay well clear of marginal to instrument conditions, especially in low-light conditions or over water or areas with few ground references.

Understand your autopilot and its failure modes. Dont be too macho to use your autopilot to get out of trouble if you cant avoid adverse weather.In-flight structural failures, though terrifying, are fairly rare. Their spectacular nature means ISFs receive significant attention from the FAA and lawmakers alike. That some of the contributing factors of ISFs-corrosion, total airframe time, cumulative abuse-are more common in older aircraft has placed the whole concept of aging aircraft at the forefront of federal rulemaking.

Not all old airplanes are in danger of ISF, just as not all ISFs happen to aging aircraft. In almost all cases there are patterns of abuse that warn of possible ISF: operating outside of the airplanes intended design envelope, or flying in conditions outside the pilots, or the airplanes ability.