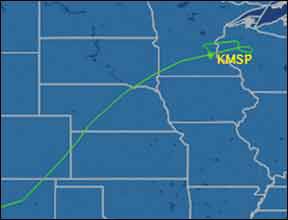 On October 12, 1997, popular musician John Denver flew his new-to-him LongEZ into the Pacific Ocean off Monterey, Calif. He died on impact with the water. According to the NTSB, “witnesses saw the airplane in straight and level flight about 350 to 500 feet over a residential area, then they heard a reduction of engine noise. The airplane was seen to pitch slightly nose up; then it banked sharply to the right [and] descended nose first into the ocean.” The probable cause statement included, “…the pilot’s diversion of attention from the operation of the airplane and his inadvertent application of right rudder that resulted in the loss of airplane control while attempting to manipulate the fuel selector handle.” The distraction of reaching and repositioning the airplane’s fuel selector led to the distraction.

In October 2009, a pair of Northwest Airlines pilots flew an Airbus A320 150 miles beyond their destination at the Minneapolis-St. Paul International Airport, an event garnering headlines and blamed on cockpit distractions so severe and long-lasting they missed radio calls and navigation points for more than an hour. The image below, courtesy FlightAware (flightaware.com), is an excerpt of that flight’s ground track.

While these may arguably qualify as extreme examples, they are the iceberg tip of a deeper phenomenon routinely putting pilots, their charges and their aircraft at risk. It happens anytime an aviator loses focus on the pilot’s full-time job one—fly the airplane—but it happens a lot.

Let Me Count The Ways
NASA’s Aviation Safety Reporting Service database holds more than 330 reports with distraction a factor—since 2009—solely involving Part 91 operations. Expand the search to include all operations, and the number of reports rises to more than 1000 for the same time frame. And this doesn’t count reportable accidents not included in the ASRS reports.

Both people- and machine-sourced distractions contribute to outcomes generally benign but sometimes utterly tragic. Both are avoidable, of course, but avoiding the trap of distraction requires many of those same pilot skills we used to get through training and a checkride: discipline, focus, and—depending on the catalyst—correct technique.

For the two airline pilots on Northwest Airlines Flight 188, the distraction was wholly people-oriented and entirely self-inflicted: They were focused on their laptop computers while running a scheduling program. No one was flying the Airbus. For John Denver, an element of unfamiliarity likely contributed to the accident—the LongEZ entering a steepening descent while he attempted to use a pair of pliers to turn an inconveniently located fuel-tank selector valve. His decision to launch with a relatively small amount of fuel contributed to the start of the accident but the distraction completed the loop.

A similar example involves a Cherokee 180 pilot who had a door pop open this past December on a flight with three passengers. The pilot returned to his departure airport but then decided to go around. Then, the pilot reported the engine lost power while flying the base leg of the pattern—a real emergency to go with the relatively minor original distraction. The pilot attempted to land in a nearby field, but the airplane struck trees and power lines, impacted the terrain and came to rest inverted. The pilot and two passengers suffered minor injuries, the third passenger serious injuries. And it could have been so much worse.

Dropped pens, spilled drinks, misplaced charts or plates—all have contributed to the pilot- or passenger-induced distractions.

Personal Devices
As illustrated by the Northwest pilots and their scheduling efforts, technology can provide a ready source of distraction. Such was the case two years ago in Australia when, according to the Australian Transport Safety Bureau, the captain of Jetstar Flight JQ57 failed to shut down his mobile phone prior to the Airbus 320 departing Darwin for Singapore. As the Airbus descended toward Changi Airport, that phone started beeping new-message alerts. The captain later claimed he was attempting to unlock the phone to turn it off as the First Officer tried vainly to get the Captain’s attention, ultimately disengaging the autopilot to land. Which is when the FO noticed the landing gear remained snugly in the wells and the plane was down to almost 700 feet. The FO wisely initiated a go-around. In other words, a professional crew became distracted by a personal electronic device (PED) to the point of causing a reportable incident. It’s easy to imagine the challenges of the single pilot—particularly when flying single-pilot IFR.

IFR Solo: Prepping Helps
Single-pilot IFR holds the potential to be the most-rewarding flying there is. It also can be the most risky, depending on the circumstances. You may find it as easy as following the moving image on a display screen or as challenging as trying to remember which way to correct for the needle deflection on a localizer back-course approach.

Those are the main jobs and if nothing happened to upset the rhythm of the arrival, all would be less intense. But all does not, of course, always go as planned—or as filed. Consider how you can avoid letting these everyday IFR situations becoming a fatal distraction:

Amended Clearance: Among the six words most dreaded in the IFR cockpit are “stand by to copy amended clearance.” That means your best-laid plans are out and ATC’s new plans are in. You’ll be digging out a different plate, maybe a different arrival, reprogramming or resetting something in the panel and revising your ETA, all while dicing with IMC and air not smooth. Becoming distracted in the process of acting on the changes is a repeat issue.

Missed Approach: Another procedure with negative connotations to many instrument pilots. Usually, all it means is going to the FAF to try the same approach again. But what if repeating the approach just missed isn’t in the cards, for whatever reason? The alternate is the answer, along with an amended clearance, recalculating your ETA and fuel reserves, plus once again reconfiguring the panel.

Mechanical/Electrical: An electrical-system issue, a recalcitrant gear system, balky radio or garbled communications—there are hosts of issues that can arrive unexpectedly, and seldom at a good point in the flight. Maybe you put down the gear lever but can’t immediately confirm that they’re all in the down-and-locked position; maybe it’s a balky fuel pump or a failing suction pump—a failure many of us have experienced. How to prepare for the unexpected?

First, when flight planning for an IFR flight, particularly a single-pilot trip, organizing into a single small folder all the approach plates for the destination and any alternates can put you miles ahead with the appropriate plate just a page-turn away. For going missed, well, you already briefed yourself for it, right?

As for the mechanical and systems issues, pilots should know enough about their aircraft to deal with the other issues as rapidly, calmly and knowledgeably as possible. If that means breaking off and getting out of the airport traffic area before things get complicated, that’s a sign of mature judgment and a worthwhile step.

Sterile Cockpit
Perhaps the most uncomfortable issue for many pilots is enforcing a sterile cockpit when friends or family or some other newcomer-to-aviation is flying along. Eliminating extraneous conversation during critical times is SOP in commercial aviation—not so much in personal flying. But there’s no reason for it to be a problem.

Start with the pre-flight inspection of the aircraft; include any passengers, rated and otherwise, and include them in a pre-flight passenger briefing. Relate why you need quiet at certain times; explain that you will insist on it when it’s needed. By explaining as much as you can about what’s going to occur, what those guests will see and hear and feel, in advance, they’ll enjoy the experience even more because they’ll be able to relate what’s happening to what you told them to expect.

If the aircraft has an audio-control system allowing you to isolate passengers from the PIC, use it! Tell your charges that they can talk, but you won’t be hearing them, and that they may still be able to hear you, depending on the system. Engage them in the flight, as well—keeping them busy watching for other traffic, then tapping your shoulder to alert you to anything they spot. There’s no reason for you to allow chatty pax to distract you from the tasks at hand.
As pilot-in-command, preventing cockpit distractions is your responsibility. How you discharge it is up to you, but you always need to remember Job One: Fly the airplane.

Dave Higdon is a professional aviation writer/photographer with several thousand hours of flight time distracted merely by flying the machine.