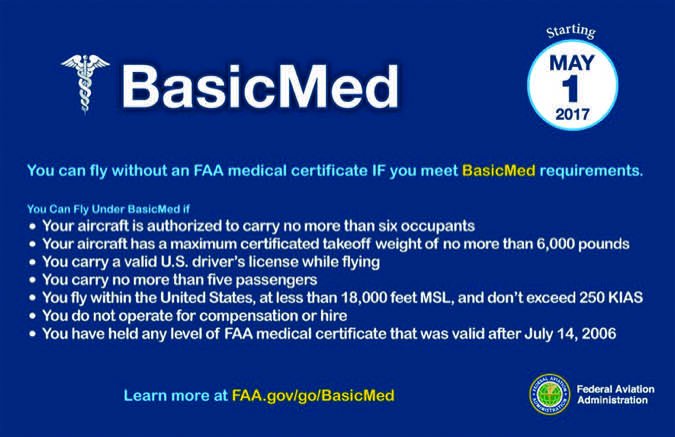 Effective May 1, 2017, you may no longer need to hold an FAA third-class medical certificate to serve as pilot in command. The change results from FAA implementing a Congressional mandate enacted last year, which directed the agency to develop appropriate regulations to eliminate the third-class medical for specified flight operations. The image below, prepared by the FAA, highlights BasicMed’s major provisions.

A long time in coming, the policy came as a result of several factors, including 10-plus years of experience with the FAA’s sport pilot certification, which does not require a medical certificate, and implementing legislation introduced and pushed through Congress by U.S. Sen. James M. Inhofe (R-Okla.). Along the way, AOPA and EAA put substantial efforts behind the legislation, helping get it through both houses of Congress and to the President’s desk last year for signature. That’s the big print. And there’s plenty of fine print.

To start with, there’s paperwork involved. The FAA has developed something it calls the Comprehensive Medical Examination Checklist (CMEC). Airmen wishing to fly under the BasicMed program must complete this checklist and then take it to any state-licensed physician, obtain a physical examination and have that physician complete the CMEC. The pilot retains the completed CMEC, which becomes part of the pilot’s airman certification paperwork and must be made available to the FAA upon request.

The pilot also must take an online medical education course, complete the attestations and consent to a records check of the National Driver Register. A course-completion document will be generated, which the pilot also must retain. While exercising airman privileges under the BasicMed program, pilots must hold a current and valid driver’s license issued by a U.S. state, territory or possession and comply with all medical requirements or restrictions associated with that license, as determined by the issuing state. Pilots must carry the driver’s license while exercising privileges under BasicMed, but the remainder of the program’s documentation does not have be aboard the aircraft.

On January 9, 2017, the FAA published Advisory Circular AC 68-1, Alternative Pilot Physical Examination and Education Requirements, which “describes how pilots can exercise student, recreational, and private pilot privileges in certain small aircraft without holding a current medical certificate.” The AC provides detailed explanations of how the FAA is implementing the statute’s provisions, including “the required medical education course, medical requirements, and aircraft and operating restrictions that pilots must meet.”

The AC also is intended as a resource for state-licensed physicians providing the required medical examination and completing the supplied (draft) checklist. The AC is available free for the download from the FAA’s web site at the following URL: tinyurl.com/SAF-BasicMed.

Importantly and as of early April when this issue of the magazine was being finalized, the FAA had not yet received final approval for the CMEC nor had it listed an approved BasicMed courses. According to the FAA’s web site, the CMEC was under review by the Office of Management and Budget (OMB) and was “not yet approved for use to comply with BasicMed requirements.” The FAA said it anticipated OMB approval by May 1, 2017, the implementation deadline. Similarly, the FAA said it “anticipates that BasicMed online medical courses will be available by May 1, 2017.” When the CMEC and the BasicMed Online Medical Courses are available, that information also will be posted to the FAA’s web site. To access the FAA’s BasicMed page, visit: tinyurl.com/SAF-BasicMedHome.

Will aircraft owners wanting to fly under the FAA’s BasicMed program still be covered by their insurance policy? Michael Adams, Senior Vice President at Avemco Insurance Company, addressed that question—insofar as Avemco is concerned—in an article published on the company’s web site in March. According to Adams:
• Avemco will not increase insurance premiums of pilots who opt to comply with BasicMed. “Our standard answer had been, ‘We do not have any plans to change our underwriting, policy contract, limits offered, or premiums charged because of the proposed new medical requirements.'”
• “We are accepting the BasicMed medical the same as the 3rd class medical for satisfying our insurance policy requirements for a pilot medical.” If a pilot opts to use the BasicMed program instead of a third class medical, “it will not affect the coverage limits or premium of your policy.”
• Policies “may have a requirement for an annual physical” for various reasons. “In that case, the requirement to have a medical every 12 months is our insurance requirement, not the FAA’s.”

At this time, no one knows how well the BasicMed program will work, simply because it hasn’t yet gone into effect. Another unknown is the extent, if any, to which physicians may balk at or refuse to sign the CMEC, a requirement to use BasicMed. In an informal survey of two doctors with which we’re familiar—both of whom also are FAA-designated aviation medical examiners (AMEs), one absolutely will sign the CMEC presented by a pilot, all things being equal, while the other won’t. In the latter’s case, the primary expressed concern involved liability, but it’s not clear how an AME is exposed to greater liability when executing the CMEC than when acting as an AME. Time will tell, and we can envision a list of doctors willing to sign the checklist will be circulating around the internet in the near future.

As with any such fundamental change to the FAA’s rules, there are unknowns, There also are winners and losers. For example, if the last time you held an FAA medical certificate predates July 15, 2006, you’re not presently eligible for BasicMed. You can fix that by obtaining a new medical certificate, which of course eliminates the need for BasicMed.

There may also be some initial confusion and a series of unintended consequences. An example: A flight instructor acting as pilot in command of a covered aircraft may do so without a medical certificate under the BasicMed program. However, a pilot wishing to act as a safety pilot under FAR 91.109 while another pilot is simulating instrument flight may not do so under BasicMed. According to the FAA’s interpretation, a pilot may use BasicMed only if he or she is acting as the pilot in command (PIC) because that’s the way Congress wrote the enabling statute—to allow a PIC to use BasicMed. If you’re acting as a safety pilot in the scenario above, you are not acting as PIC and must hold a valid medical certificate (i.e., other than BasicMed). This interpretation is found on page 2 of the FAA’s BasicMed Frequently Asked Questions, dated February 17, 2017.

The BasicMed program may not be perfect and may not even help many pilots get back in the air, at least initially. But it’s a giant first step in the right direction.