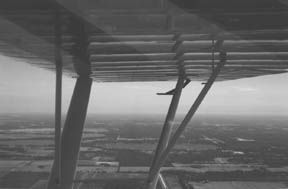 The true meaning of behind the power curve is rooted in aerodynamic theory. The curved line in the figure below represents the typical change of drag with airspeed. If you break the curve into two parts, you will notice that this fictitious airplane has its lowest point on the curve at an airspeed of 70 knots.

This point, known as L/Dmax is the point of minimum drag, and is where the best glide speed of the airplane occurs. No other angle of attack will give you lower drag for the lift required.

The speed of 70 knots corresponds to a particular weight, lets say max gross weight, but the angle of attack for L/Dmax is always the same, at least in general aviation airplanes. While the best glide speed will change with weight, the angle of attack will not.

To the right side of 70 knots, the drag increases with airspeed. Parasite drag is the dominant drag in this area, and the chart shows a continuing increase of drag with an increase of airspeed. In this region, the airplane is in what is known as the speed stable region.

The same is true the other way. On the speed stable side of the drag curve, a reduction of airspeed, with no change in thrust or pitch attitude, will cause the drag to decrease, and yield an excess of thrust. The excess thrust will cause the airplane to accelerate back to the higher airspeed.

Now, lets look at the left side of the drag curve. If the airplane is flying at 65 knots, a reduction of airspeed will cause drag to increase. This is due to the fact that in this area of the drag curve, induced drag is starting to dominate. The slower the airplane goes, the higher the angle of attack it demonstrates and the more induced drag it has.

This is the reason why you cannot stretch a glide. When you pitch up and slow the airplane below best glide speed for that weight, you will get an initial, transient, decrease in descent angle. However, once the airspeed bleeds off, the induced drag will increase rapidly and cause a greater descent angle.

It may be possible to balloon yourself over a tree, which may be worth it, but be prepared to start settling at a steeper descent angle once the speed bleeds off. You are now in the speed unstable range.

Real-World Application
Consider a flight in which you are doing slow flight at 60 knots, maintaining 3,000 feet. You get a bit distracted and find that you have descended to 2,900 feet. You figure that since its only 100 feet you can just raise the nose a little without changing power and climb slowly back up to 3,000 without losing too much airspeed from the 60 knots youre holding.

In the speed stable region, you can raise the nose slightly and regain some altitude without a power change by merely trading some airspeed for altitude. The airspeed will not continue to diverge away from the original speed. In the speed unstable region, reducing the airspeed increases drag until eventually you do not have enough thrust to keep flying.

All airplanes have the same basic drag curve shape, but the rate at which the drag increases once slowed down below L/Dmax, depends on the specific plane. Aircraft with low aspect ratio wings tend to show a very rapid increase in induced drag. Some aircraft have a flat bottomed drag curve, which means they show a gradual increase in drag as the airplane slows through L/Dmax.

Behind the Power Curve
The dark line in the chart is thrust available. Lets say that the thrust available line represents maximum power – 2700 rpm for this airplane. Notice that the thrust starts out at a maximum value of about 420 pounds. Assuming the rpm remain constant with airspeed – which they will for aircraft with constant-speed propellers – the thrust will decrease as airspeed increases.

The higher airspeed, about 89 knots, is the maximum level flight speed of the airplane, and the drag and thrust are equal at 390 pounds. The low speed point, about 52 knots, which is still slightly above the stall speed, represents a point where you will need full power to maintain airspeed in level flight. This is due to the large increase in induced drag at this high angle of attack.

At the low-speed intersection between the two lines, you have full power in to maintain a low airspeed. Because youre already at max power, you cant accelerate to return to a more normal flight configuration. You have no excess power left to accelerate the airplane because all the power is being used to maintain airspeed.

You are now behind the power curve. You have nothing left from the engine to accelerate you. The only options you have are to increase power – which you cant do if youre already at full power, reduce drag by raising flaps or gear, and accelerate the airplane by lowering the nose and allowing the airplane to descend. In the descent, the airplane will accelerate and decrease the drag. This will put you back to a point on the drag curve where you have some excess thrust.

The steeper the bank angle, the higher the indicated airspeed is that divides these two regions. This has obvious implications when maneuvering for landing. Besides the increase in stall speed with bank angle, a steep turn at low airspeed can develop a high descent angle.

The angle of attack for L/Dmax will give you the shallowest descent angle, and thus will allow you to glide the farthest. Your best glide indicated airspeed, at a particular weight, remains constant with altitude. However, at higher altitudes the same indicated airspeed will give you a higher true airspeed. That means you will actually be moving down the same descent angle at a higher true airspeed, with a resulting greater descent rate.

Descent rate is a function of two variables, flight path angle and your speed along the flight path. You can have a steep descent angle with a low airspeed, and you will have a low descent rate.

The minimum sink speed is usually about 75 percent of the best glide speed. Airplanes with a high parasite drag coefficient sometimes have a minimum sink speed that is below the stall speed. In this case, the rate of descent will continue to decrease (with an increasing descent angle) but will never really reach an ultimate minimum before the aircraft stalls, and then the rate of descent will increase rapidly.

Understanding how the drag of your airplane changes with airspeed can give you the knowledge of anticipating how your plane will react under conditions that range from descent planning to forced landings. While maneuvering for landing, the aircraft is normally in a high-drag, low-airspeed configuration, which requires precise control of both airspeed and flight path for a stabilized approach.

As we all know, a stabilized approach is the key to a good landing. Every pilot makes the occasional crummy landing, but I will take nine squeakers for each crummy landing any day – as long as my mother-in-law is not on board for the crummy one.

Also With This Article
Click here to view “Drag and Thrust Available.”

Michael Friese is an ATP, CFII and Airframe Mechanic. He is a former Assistant Chief Flight Instructor at Embry-Riddle Aeronautical University and currently flies Super King-Air 350s and Beech 1900s.