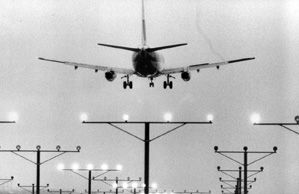 High-performance single-engine airplanes are amazing little speedsters. One can cover half a continent in less than half a day. On trips of 500 nautical miles or less, a personal airliner like a Bonanza or Cessna 210 makes a lot of sense. Considering door-to-door times on those trips, one can often beat the airlines, especially if the airline flight is a two-leg, through-the-hub affair.

But if youre flying a piston airplane in the terminal area and heading for the airport at the same time as a large jet, let the airliner win the race to the airport.

A participant on a Mooney e-mail discussion list once bragged about he had beaten a Mitsubishi MU-2 turboprop to the airfield, to which another respected participant with advanced ratings replied, You havent lived until youve outrun a Part 121 turbine operator.

Pilots attempting to collect that thrill sometimes dont live to tell the story. A week before Christmas in 1992, a Cessna Citation and a Boeing 757 were on approach to Billings, Mont. The 757 was in the lead, but not by much. The approach controller sequenced the Citation behind the 757, called it as traffic and the Citation crew reported the big Boeing in sight.

After being cleared for the visual approach, the Citations cockpit voice recorder captured the captains fixation with beating the 757 to the airport, even though it was clearly ahead. After reporting the 757 in sight, the Citation captain actually increased his speed and reduced the lateral separation between the two aircraft.

The Citation voice recorder captured statements like, Almost ran over a seven fifty seven. In a chilling ending, the captains last words were, We could have beaten this guy in. The next sounds were of the Citation hitting a warehouse, inverted, after encountering the 757s considerable wake turbulence.

The early Citations are like a lot of Cessna airplanes; it may not be the highest performing airplane in its class, but it has exemplary handling qualities and safety record to match. Except when tangling with the vicious wake of a 757.

Terminal Profiles
The average single-engine retractable, at best, will indicate 140 to 160 knots in the terminal area. A modern transport jet will be at or below those speeds only for about 60 seconds after pushing the thrust levers up for takeoff and for about five minutes before landing, unless given a very restrictive speed assignment by ATC while on vectors for the approach.

ATC usually starts stepping a jet down to pattern altitude no later than 30 nautical miles from the runway. If they dont, the pilots will start to ask for lower. During the descent to approach altitude, the flight crew usually will fly at 250 knots indicated, unless speed restricted by ATC. The general rule in a jet is get down, then slow down.

Once in the pattern, a jet crew will slow to clean maneuvering speed, which is the slowest speed they can fly without extending the flaps. This fuel-efficient speed is approximately 200 knots indicated. Before or during the base turn, depending on how far from the runway they are, the crew will begin to extend flaps and slow to approximately 160 knots. The closer in the approach, the earlier the crew will extend the flaps.

So, the only time a piston airplane will be able to come close to outrunning a Part 121 jet will be when it is on landing approach – precisely the time little airplanes need to keep their distance. But that doesnt keep them from trying.

I was on approach to Richmond, Va., one evening a few years ago in a very lightly loaded 757. Our clean maneuvering airspeed, about 190 knots, and final approach speed, 115 knots, were lower than normal. The approach controller had sequenced a Piper Navajo on a visual approach about five miles behind us.

The Navajo pilot must have had the go-handles forward because when he checked on the frequency, the tower controller asked him to slow to 150 knots to maintain separation. We were on a two-mile final and the Navajo was about four miles behind us. When given the speed reduction, the Navajo pilot, as we say in Kentucky, screamed like a stuck hog. He was incensed that he had to slow down and suggested that we fly a faster approach.

Do the Math
As I listened to that Navajo pilot who wanted to fly up my tailpipes, I gritted my teeth; the crew that was flying the Billings 757 are colleagues of mine and I was thinking of that accident. I wanted to make a suggestion of my own to the Navajo pilot: He needed to do a little math.

At 75 percent power, the best a Navajo can do in the pattern in level flight is about 180 knots indicated. The tower controller asked him to slow to 150 knots, a 30-knot difference. Assuming those airspeeds were maintained over the six miles he was from the runway (which they wouldnt be if the pilot wanted to land), care to guess how much extra air time the Navajo pilot had to endure because of the speed reduction? Twenty-four seconds. Thats a small price to pay for safety, plus it was probably the best thing to do for those two expensive, sensitive turbocharged engines used on the Navajo.

The Airmans Information Manual details the behavior of the wake generated by the pressure differential between the top and bottom of the wing on any airborne airplane. This wake leaves the wingtips in counter rotating vortices and sinks at several hundred feet per minute and stabilizes 500 to 1,000 feet below the generating aircraft. The vortices will drift with the wind and atmospheric turbulence tends to break them up.

Wake turbulence vortices impart an intense rolling moment to an aircraft encountering them. A strong wake vortex can easily exceed the roll capability of an aircraft and can even cause inflight structural damage.

The strength of the vortices is directly proportional to the weight of the aircraft. The heavier the airplane, the stronger the vortices – except in the case of the Boeing 757. That aircraft has been discovered to have a wake that is stronger than other aircraft its size and weight.

ATC treats the 757 as a heavy airplane, meaning that it is given the same wake turbulence separation standards as an airplane weighing more than 255,000 pounds. The 757 weighs almost that much anyway.

Aircraft flap configuration and speed have an influence on the wake it produces. An aircraft that is heavy, clean, and slow generates a wake that is at its maximum strength. A jet that is clean and slow is usually near the airport and in the pattern for landing.

The more time that elapses between the wake-producing airplane and a smaller one makes it less likely the small airplane will encounter a dangerous vortex. A reduction in approach speed by the pilot in trail may be appropriate.

A more common tactic to avoid wake turbulence is to stay above the flight path of the wake-producing aircraft. Most runways to which a jet is approaching will be ILS equipped. You can bet that the jet crew will be using the glideslope guidance for landing. Fly your approach to remain at or above the glideslope and plan to touch down beyond the landing point of the large aircraft.

If the runway is not glideslope equipped, the jet crew will be attempting to fly a descent profile that equates to an altitude loss of 300 feet per nautical mile. In other words, on a five mile final, the jet crew will plan to be around 1,500 feet agl. Plan your approach to stay above such a profile.

The 757 somehow got a reputation that it flies a steeper than normal approach glidepath. That is not the case. In fact, due to the amount of residual thrust from its high-bypass turbofan engines at idle, it is not a particularly easy airplane in which to fly a steep approach. It will fly the same glidepath as most other large airplanes.

A different runway may be the ticket to a safe arrival. If youre bumping up against an arriving large airplane, the airport is so configured and traffic flow permits, ask for another runway. But if you decide to try another runway, keep in mind that wake vortices will travel along the ground at 2 to 3 knots before dissipating. It is possible for them to migrate from one runway to another.

At Richmond, I was approaching runway 2. It was clear and a million that night and the Navajo pilot could have easily swung over to runway 34 on his visual approach and added very little time to his flight. The thresholds of those runways are well separated and he would have remained a safe distance away from our wake.

Another thing to consider when approaching the airport behind a large aircraft is that, among the responsibilities you assume upon accepting a visual approach clearance, you are now providing your own traffic and wake turbulence separation. Thats why many controllers are so eager to issue such a clearance to you. Those monkeys are now off their back and onto yours. If you screw the pooch, theyll say, Hey, he was on a visual.

Its fun to use your flight cunning and airmanship to sometimes out perform a bigger, faster airplane. The nimble flight characteristics and short landing capabilities of general aviation airplanes can sometimes be used to drop-in in front of a big airplane that requires more pattern miles. But if its a David and Goliath sprint to the threshold, David will lose every time.

Bill Kight is a Mooney owner who happens to fly 757s for a major cargo carrier.