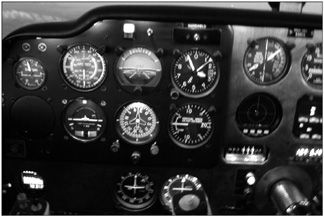 by Adrian A. Eichhorn

When pilots inevitably gather to discuss the various risks of certain flight operations, flying over mountains, in IMC or at night is always a lively topic. Someone will point out that, being an inanimate object, the airplane doesnt know what time it is, what the weather is or what its flying over. Someone else will point out the illogic of refusing to fly at night, while another pilot will draw a line in the sand against it.Regardless of whether flying at night gives you the willies, is night flying really more dangerous than in the daytime?

Nighttime flight operations offer a number of benefits when compared with flying the same route during the daylight hours. The air is generally smoother, theres less traffic, controllers are not as busy and can be more helpful, and traffic can be easier to spot. The only real problem is, well, its dark. And, while it seems simple enough, because a pilots ability to see and avoid unlighted objects is impaired at night, pilots need to plan ahead and respect the differences. As we shall see, finding and avoiding those objects can mean the difference between a safe, relaxing night flying experience and something else.

Differences
Unlike, say, continuing VFR into IMC, or reckless operation, there is no formal category for the an aviation accident occurring during nighttime flight operations. Instead, accident investigators simply round up the usual suspects after they collect all the necessary information and when they write a final report. Sometimes, the accident investigators equivalent of an asterisk is appended to a report, noting that the event occurred at night.

Take, for example, the December 9, 2003, fatal crash of a Piper PA-28-181 in Sugar Land, Texas. The 350-hour non-Instrument-rated Private pilot was attempting a night landing in good visual conditions. After the pilot confirmed to the controller he saw the runway, the flight was cleared to land. Instead, the airplane struck power lines running perpendicular to the approach end of the runway, which featured a displaced threshold of 1964 feet. Both aboard the Piper died in the crash. At the time, wind at the airport was reported from 320 degrees, at 16 knots gusting to 25 knots. The NTSB determined the probable cause was the pilots failure to avoid power lines and noted the nighttime conditions and the high winds.

Later that month, on December 26, 2003, a Cessna 177RG was substantially damaged when it hit a deer during the landing rollout at Waterloo, Iowa.Again, night visual conditions prevailed. Neither the Private pilot nor the ATP-rated passenger was injured.

These two accidents demonstrate that, yes, night flying requires more careful operating practices. Rarely are power lines marked for night operations, but displaced thresholds are. Similarly, few deer are equipped with position lights, but airplanes have been known to collide with deer and other wildlife in broad daylight, too.

And Then Theres CFIT
Similarly, controlled flight into terrain (CFIT) accidents can happen in broad daylight, but operators are especially vulnerable after the sun goes down. A good example occurred on November 19, 2003, near Bellevue, Idaho, when a Cessna T210N crashed in night visual conditions while maneuvering to land. The solo pilot was killed.

After informing the local controller that he was going to perform a 360-degree turn to lose altitude if thats okay, and being cleared to land, there were no further communications. The Cessnas wreckage was located 307 feet below the summit of a mountain six nm southeast of the destination airport. The airplane had impacted on a southwesterly heading in a slightly right-wing-low, level attitude. The NTSB noted the mountainous terrain, high winds and the dark night in its finding of probable cause.

Another example of why there is increased risk of a CFIT accident at night occurred on December 22, 2003, in Missoula, Mont. After a nighttime takeoff, two pilots flew a pressurized Beech Baron 58P into open terrain, with one of them suffering minor injuries. The aircraft was destroyed by a post-impact fire.

Shortly after taking off for the night flight in IMC, the flying pilot-who had no previous flight time in this make and model-made a right turn from the runway heading at about 400 to 500 feet agl to join the departure procedure.During the turn, a thump was felt and the right bank angle increased from about 25 degrees to 45 degrees. While the second pilot was attempting to correct the increased bank angle, the aircraft entered a descent. Just before hitting open terrain one mile south of the runway, the PIC took control and leveled the wings. The aircraft skipped across open terrain for several hundred yards before coming to rest on its belly. Neither pilot could recall scanning the instruments to verify a climb or descent.

Predictably, the NTSB determined the accidents probable cause to include the second pilots failure to maintain terrain clearance while maneuvering after takeoff. Additionally, the Board gigged the PIC for inadequate supervision and noted the nighttime conditions.

Its likely that neither of these two CFIT accidents would have happened in daylight, since it would have been easier for the crews to see and avoid the terrain. But if you choose to fly at night, especially in the mountains or away from well-lit areas, extra precautions must be taken to identify and avoid potential hazards that you just cant see.

Playing Tricks
Of course, proper planning and exercising additional cautions are not the only keys to successful nighttime flight operations. To identify and avoid those potential hazards, we must also understand and compensate for the tricks our eyes can play at night.

The eyes physiology creates several limitations on our ability to visually acquire objects at night. Perhaps first and foremost is the eyes requirement to become accustomed to low light levels. Bright cockpit lighting can drastically impair our ability to see lighted objects outside the aircraft.

Other darkness-related visual limitations include autokinesis (stationary objects appear to move), the so-called Pukinje Shift (certain colors are perceived differently) and the need to compensate for the eyes natural nighttime blindspot by using our peripheral vision. Understanding and compensating for these unavoidable dark-light vision limitations can make our night flying experience much safer.

Conclusion
Flying between sunset and sunrise can be especially enjoyable, if pilots understand and are prepared for the differences with which they must contend to ensure safe operations. Identifying and avoiding obstacles and terrain while compensating for the eyes physiology are key. So is ensuring the airplane is properly equipped and that the proposed flight doesnt present any additional challenges because of darkness. If it does, its your responsibility to determine if the additional risks are worth it and whether they can be properly managed.

Pay attention to the details at your departure and destination airports, ensure you have sufficient altitude to clear obstacles and terrain, and do some what-if planning to avoid that inevitable bump in the night.

-Adrian Eichhorn is an ATP-rated pilot and CFII based in the Washington, D.C. area. He was the FAA Aviation Safety Counselor of the Year in 2002.