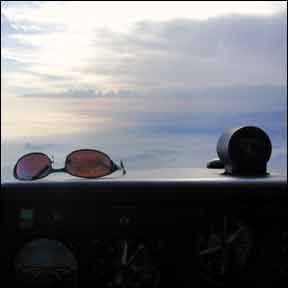 We pilots have been known to do foolish things when under stress. Especially when we find ourselves in a situation for which we have not received any training. The problem is, of course, there are many things for which we haven’t been trained. Not surprisingly, we are likely to worry about the wrong things as we evaluate the hazard we face and then reach the wrong conclusion as to what we should do. It’s natural. We are also the products of a flight training system that has never been willing to educate up and coming pilots on how to avoid the biggest risk we face as aviators—pressing on VFR into crummy weather.

We all know it’s the biggest killer annually, but how many of us were taught how to fly by visual references under a 600-foot ceiling an one-mile visibility, or what to do if we find ourselves in such a predicament? How many of us were trained in making a precautionary landing in a field? Or getting a pop-up IFR clearance? If you were, you’re lucky, and you should thank your CFI every now and then. But, when pilots do end up in such circumstances, the all-too-common result is a closed-casket funeral, often on a very nice day.

Thrills And Chills
Here’s how it usually goes. After being overly optimistic about the weather and finding ourselves down low, leaning hard against the shoulder straps in a vain hope that we can see just a little farther forward, amazed at how hard it is to keep the wings level and shocked at how fast that tower appeared out of the mist and flashed by the left wing tip, it is not surprising that we find ourselves willing to do things we have neither been trained to do nor practiced. The results tend to be predictable.

A steep turn at low altitude, in limited visibility, is challenging. Pressing on, hoping the weather will improve is to flout Murphy and his inimical Law. Face it, there are a lot of things to hit once below 1000 feet agl and a moment’s inattention can mean dropping a wing and the start of a loss-of-control event. Or CFIT.

Playing a treacherous role in the entire event is the mental struggle going on as we do our best to keep the airplane upright and peer ahead for obstructions. We waste valuable mental bandwidth chastising ourselves for getting into a place where our options are limited and the downsides many. We don’t use enough of the remaining bandwidth to think ahead, about how all this is going to turn out if we don’t do something positive, something with a future.

Consequences
We may never even consider landing on one of those perfectly good fields below us because we’ve never been taught to do so and no one, other than glider and balloon pilots, ever even talks about landing on anything other than an airport. Besides, if we do land on somebody’s property we are convinced that we will probably get in trouble with the FAA and, heaven forbid, we’ll be crucified on the Internet by the armchair pilot experts.

We can easily imagine getting into trouble. It’s something we’ve accomplished since we can remember. We know how unpleasant it is and we’ll do all we can to avoid it, mostly by making sure we don’t come to the attention of people who might let the FAA know that we’ve made less-than-stellar decisions before and during this flight.

So, even as we agonize, knowing that there are ways to end this flight safely, we press on, up to our scalp in danger, hoping against hope that things will get better.

And, every year, too many of us die. And with something fewer than 500,000 active pilots in a country of some 313 million people, we might well be considered an endangered species. So, maybe it’s time to start treating ourselves with some serious care to help our species survive.

In looking at the continued VFR into dirty weather accidents, I’m always struck by the fact that about half of the pilots involved were instrument-rated. Even if they were not current, there is a very good chance that they could keep an airplane upright while in the clouds, make turns to a heading and fly an approach with a little help.

Out Of This, Please
Let’s play through a VFR-into-dog’s-breakfast-weather flight, mentally, and see what decisions we can make to increase the odds of an ending that involves us rolling the wheels somewhere we select with the airplane in condition to be used again in the very near future.

Here we are, at 500 feet agl, under an overcast the briefers said was going to be at 2000 feet, facing visibility varying between one and two miles. The terrain below is slightly rolling, there is the usual collection of towers of varying sizes and cross-country, high-voltage power lines. We’ve slowed down to the bottom of the green arc on power so that we have more time to deal with whatever might come out of the murk, and we’re following the magenta line on the GPS because we haven’t figured out anything better to do.

No, I’m not going to fail the GPS on us, but we are getting terrain warnings from time to time, and we’ve deviated around a couple of hills that come alarmingly close to the base of the clouds.

We want out of this. We don’t want to inform others of our plight because that would be embarrassing. However, we don’t want to look stupid on the NTSB report. Taking a deep breath, we admit to ourselves that as PIC, we have an obligation to use the resources available to us to assure our passengers get out of this alive.

Hey, we’ve got a PLB in our survival kit. We’d not hesitate to use it on the ground. We’re going to use the aviation PLB, ATC. We’re going to get a pop-up IFR clearance.

We open one of the rustier doors in the mental IFR files and dig out what our instructor told us. It boils down to climb and talk. Get away from that unforgiving ground, into the sky where we’ll have room to maneuver and get some immediate value from our tax dollars by getting ATC to assist us.

Taking Action
We smoothly set climb power, pitch up and trim the airplane for a solid, positive rate of climb as the clouds close around us. Taking a couple of deep breaths, we remind ourselves that we’re below the lowest instrument altitude around here, so there’s little chance of a mid-air collision, plus, by being able to keep the wings level and climb, we’ve already reduced our level of risk significantly.

We don’t have any IFR charts, but doing a little button-pushing on the GPS brings up an approach control frequency for an airport about 40 miles away. That’s a very good place to start. (Lacking a frequency, we’ll just make a call on 121.5 and establish contact.)

Frequency in the box, we double-check to ensure we’re still climbing, wings level on a constant heading and feel a further surge of relief knowing that we are now above the highest terrain in the area. We call Approach, identify ourselves, give our location and say we’ve run into bad weather and would like a pop-up IFR clearance into _____ airport (one where we think there is an IFR approach). We can always change our destination; right now we just want to get into the system.

We’re also going to take advantage of the fact that a controller can waive almost all of the FAR 91.169 information required on an IFR flight plan.

Cutting Corners
I’ve spent some time talking with controllers about pop-up IFR. They said that they recognize that a pilot who calls for a pop-up clearance on a day when the weather is down a bit probably needs help right now and the controllers will do all they can to get that pilot safely into the system. They will be prepared to meet other needs, too, such as reading them the information on an instrument approach plate. They told me they fully understand this could be a life-or-death situation.

They also said that their workload is a reality they have to deal with, but I got the impression that controllers who have been around the block a few times can tell when things aren’t going well for someone and will find a way to help him or her get somewhere safely.

Once we establish contact, we’ll probably be asked if we can avoid obstructions VFR as we climb to a specific altitude. If we can, great. If not, we’ll keep climbing anyway as the important thing is to continue to reduce the level of risk. If we can’t avoid obstructions VFR, the controller has some procedures to follow and may treat us as an emergency until we get to the minimum instrument altitude. That’s just fine with us.

Once we get to the minimum instrument altitude, we’ll be issued a clearance. As we point the airplane in the desired direction and establish ourselves at the assigned altitude, we can get more information from the controller on weather at surrounding airports and make an informed decision as to where we want to land.

If we’re seriously rusty on instruments, we may want to go into an airport where a controller can provide an ASR approach, giving us headings and altitudes to fly and monitoring us closely as we approach the runway. Hey, we’re the PIC, it’s our obligation to use assets available to us to completely the flight safely.

The important thing is that even if we are not IFR current, our chances of landing safely are far higher with a pop-up IFR clearance than had we continued to try to pick our way along, down low. And, in an objective view, that’s what really matters.

I can’t predict whether we’ll get in trouble; although I’d tend to think that a reasonable FAA person would maybe encourage some follow-up time with an instructor rather than taking action against us. But, in the great scheme of things, that doesn’t really matter, does it? What matters is that we used one of the tools available to us to safely get out of a very high-risk situation.

Rick Durden holds an ATP and CFII, is the editor of sister publication IFR Refresher magazine and the author of the upcoming book, The Thinking Pilot’s Flight Manual.