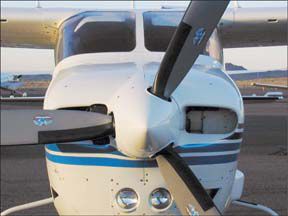 On November 10, 2004, at Mesquite Metropolitan airport near Dallas, a proud buyer wrote a check for $252,000 and departed for northern California in a 1981 Cessna P-210N. The buyer was a Private pilot who had not flown in eight years and would receive dual instruction during the flight. The pilot-in-command, hired to deliver the aircraft, had an Airline Transport pilots certificate with additional certifications for primary and instrument flight instruction and more than 22,000 flight hours.

By the days end, the Centurion lay broken on a city street, out of fuel 50 miles short of its destination. No one was injured, but the uninsured aircraft was fit only for salvage. The FAA would initiate action to suspend the ferry pilots license and the buyer would start legal action against the pilot.

The Centurions equipment included a Shadin fuel management system, GEM engine monitor, Garmin 530 GPS, dual 60-amp alternators and Riley intercoolers. The Shadin fuel computer and the GPS were linked to display the expected fuel reserve at the destination on the Garmin screen. Flint Aero auxiliary fuel tanks at the wing tips increased the usable fuel from 534 pounds to 729 pounds. A Mesquite shop had just completed an annual inspection.

First Leg
The buyer completed the paperwork while line service topped the aircraft for the first leg of a 1318-mile trip to Colusa in northern California. An overcast required an IFR departure from Mesquite but Texas, New Mexico, northeast Arizona and southwest Utah had VFR conditions. Storms farther north were pushing clouds over Nevada and California, so the routing of the last part of the trip was uncertain.

They would stop first at Roswell, N.M. (ROW), 414 nm from Mesquite. The buyer, now a student, was in the left seat and the PIC was in the right when the Centurion departed Mesquite at 1120 local time. According to the buyer, he handled the controls while the PIC worked the navigation system and comunications.

After the Centurion leveled at 8500 feet, the buyer recalls the GPS indicating a 50-knot headwind. The flight proceeded without problems.According to the buyer in the left seat, when the PIC judged that enough fuel had burned from the main tanks, he turned on each transfer pump for 20 minutes to move the fuel in each auxiliary tank to the corresponding main tank. They landed at Roswell three hours and 20 minutes after takeoff from Mesquite.

While at Roswell, the PIC instructed line service to top all four tanks and to record the amount put in each. He and the buyer departed for lunch. The FBO added 74.1 gallons (445 pounds) of fuel. One auxiliary tank took six pounds more than the other. Again according to the buyer, neither he nor the PIC checked the tanks visually during the preflight inspection.

The buyer recalls asking the PIC if they would stop again. Well see how it goes, he responded, indicating that another stop would depend on headwinds and deviations for weather.

Second Leg
The Centurion departed Roswell at 1457 local time and climbed to 10,500 feet on a route that took it north around the White Sands Restricted Area and then directly toward Colusa, Calif., where a hangar had already been purchased for the aircraft.

About an hour into the flight, one of the two alternators failed.According to the buyer, the PIC restarted it several times by turning off the master and alternator for a few minutes and then turning them back on. After each cycle, the alternator operated for a few minutes but, after several such cycles, would not restart. The flight continued on one alternator.

About two hours into the flight, the buyer later said the PIC began transferring fuel from the auxiliary tanks into the mains. The sun settled below the horizon as the Centurion passed over western Utah. Darkness and a broken cloud layer obscured the terrain as they crossed into Nevada.

Then the remaining alternator failed. The buyer told the PIC that he thought that he had received enough dual instruction for one day. The PIC took the controls from him and advised Center the flight was leaving the frequency for a few minutes. Again, according to the buyer, the alternator was reset several times but it finally refused to come online. The buyer remembers the failure being similar to that of the first alternator, some hours earlier. The Centurion continued on battery power. The buyer found an Alternator Restart button on the side panel and recalls the PIC instructing him to turn off the master switch and try it. The alternator started and operated a few minutes before failing again. It could not be restarted. The PIC and the buyer discussed the amount of fuel remaining and agreed to change their destination to Sacramento Executive Airport (SAC), 50 miles closer than Colusa.

To conserve battery power, the PIC turned off the master switch. The transponder return stopped at 0252 UTC (1852 PST), near Mina, Nev.

The flight continued, using the dimly visible horizon for attitude reference. The buyer used a tiny squeeze light on his keychain to illuminate instruments so the PIC could check heading and altitude. Periodically, the pilot turned on the master switch to check position on the Garmin, fuel status on the Shadin and battery voltage on the GEM engine monitor. The Cessna fuel gauges, near the floor, were ignored according to the buyer.

About 30 miles southeast of Sacramento, the buyer recalls the pilot turning on the master and avionics switches but leaving the position lights, strobes and beacon off. As the Centurion descended, the pilot advised NorCal Approach that he intended to land at Sacramento Executive airport with an electrical problem. The buyer turned his flashlight to the fuel gauges and was startled that they indicated empty. He advised the pilot, who swore and told approach that they would change to Mather Airport (MHR), 10 miles closer.

The engine stopped two miles from the runway threshold and at an altitude too low to reach the airport. The pilot banked sharply to land south in the northbound lanes of a major surface street while opposing traffic swerved right across the sidewalk and left into the center divider. The right wing hit trees in the center divider and the aircraft spun 180 degrees and stopped. The PIC and buyer emerged shaken but unscathed. The Centurion crashed at 0342 UTC (1942 PST), five hours and 45 minutes after departing Roswell.

Investigation
A police officer responding to the scene reported that both main tanks looked bone dry. The next day, an FAA Inspector found 10 pounds of un-transferred fuel in the left auxiliary tank. The right auxiliary tank was ruptured. He examined the engine fuel pump, main tanks, filler caps and spark plugs but found no evidence of fuel leakage or mechanical problems.

During the three-hour-and-20-minute flight from Mesquite to Roswell, battling 50-knot headwinds, the Centurion averaged 124 knots groundspeed and burned 134 pounds of fuel per flight hour. The same power settings were used during the accident flight, although the PIC leaned the mixture more carefully during that leg. At 134 pounds per hour, the Centurions tanks would be dry after 5.5 hours. On the accident flight, the Centurion was airborne for 5.7 hours. Endurance figures in the Pilots Operating Handbook reinforce those numbers. The POH indicates that the Centurion, flying in the low teens, could continue for 5.7 hours at 80 percent power, leaving a reserve of about 44 pounds.

Several additional errors and oversights may have contributed to this accident. For example, the engine may have been operated at higher power settings than intended. The cooler air supplied by the installed Riley intercoolers causes the engine to burn more fuel for a given manifold pressure. The installation includes a table of adjustments to the indicated manifold pressure to correct for this.

Also, because 10 pounds of fuel was not transferred from the left auxiliary tank to the main, it could not be used. The NTSB does not suggest why the transfer was not completed. For the Centurions 28-volt system, Flint suggests operating each transfer pump for 30 minutes. Instead, its possible they were not operated for that long. The NTSB could not determine if the right auxiliary tank contained fuel because it was ruptured.

Lessons To Learn
The various circumstances and the sequence of events surrounding this flight are worth analyzing in some detail. For example, when the flight passed over Cedar City, Utah, it had been airborne for more than three hours. At that time, one alternator was still operating. Although the terrain was obscured by darkness, Cedar City was clear with 10 miles visibility and good instrument approaches. The weather ahead was worse and the airports with fuel were far apart.

Once the second alternator failed, the options available were significantly reduced. At this point, the flight was above an undercast, at night, over inhospitable terrain. Even though the flights destination was changed from Colusa to Sacramento because of fuel concerns-according to the buyer-the amount available turned out to be insufficient.

In hindsight, landing at Cedar City for fuel and a rest stop would have seemed appropriate, but the Centurion pressed on.

The Cessna P210s POH declares that the loss of alternator capability is an emergency that requires termination of the flight as soon as practical.Describing the problems and working out a plan with ATC to land at the nearest suitable airport was a clear option. Instead, the flight continued toward poorer weather and higher terrain. The ultimate outcome, while unfortunate, could have been much worse.

Modern technology tempts many of us to start the engine, set the autopilot and GPS, and see how it goes. Most such flights are completed without injury, damage or an entry in the accident statistics. But most of them are flown in good weather and with all of the airplanes equipment in good working order. Also, few of them are flown in unfamiliar airplanes.

Especially when flying an unfamiliar airplane, airborne system failures should be considered cause for an unhurried precautionary landing and investigation by a qualified technician. And any attempt to fly to the limits of the airplanes endurance should be carefully planned.