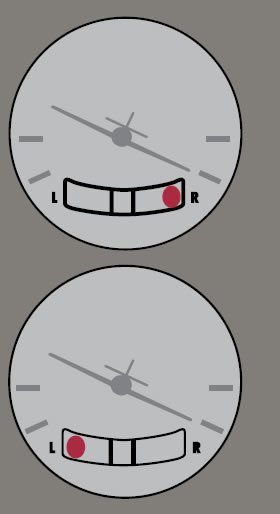 Most of the time, the typical pilot flying the typical airplane will be in a straight-and-level attitude. When it comes time to join a traffic pattern, for example, enter a holding pattern or fly an ATC vector, we abandon straight-and-level for turning flight. When we turn, we change the airplane’s aerodynamics—the degree of change depends quite literally on the degree of bank—and one outcome can be uncoordinated flight. Ideally, we all would be adept at maintaining coordinated flight, in turns and other maneuvers.

The reality is that we often let the airplane get somewhat out of coordination, especially when beginning a turn. Then, realizing what we’re (not) doing, we add pressure to a rudder pedal and/or change the bank angle to bring things back into line. The additional reality is that uncoordinated flight usually isn’t dangerous, fattening or illegal. Yes, uncoordinated control inputs can risk an inadvertent spin in certain circumstances. And lack of coordination in our flying also can be uncomfortable for the airplane’s occupants. Ultimately, however, the extent to which, if any, the airplane is not coordinated speaks more to the quality of our control inputs and how well we are flying it today than any unsafe practice. That said, coordinating our use of the flight controls ensure eking out the greatest speed in cruise and preventing an inadvertent spin when demonstrating a stall.

What is coordinated flight?

According to the FAA, “In proper coordinated flight, there is no skidding or slipping.” In other words, coordinated flight is when the airplane experiences zero sideslip. A third definition might involve use of all controls, including power and pitch to establish or maintain the desired attitude.

A sideslip occurs when the airplane is not flying straight ahead through the air but, instead, has some sideways movement imposed on it. (A sideslip differs from a forward slip, as we might perform when attempting to lose altitude while landing, in that the aircraft will be pointed away from its flight path in a forward slip. Not so in a sideslip.) So, our working definition of coordinated flight means the airplane is not experiencing any sideways moment. How does that work in turns?

The answer involves the interactions between the horizontal and vertical components of lift. In straight-and-level flight, there is no horizontal lift component, and any tendency of the airplane to be displaced laterally is a sideslip. The sidebar on the opposite page highlights indications of a turn coordinator in slipping and skidding turns.

Another way to gauge a turn’s quality comes from the FAA’s Airplane Flying Handbook (AFH, FAA-H-8083-3B) and is to look out the windshield over the nose as the turn is begun: “If the nose starts to move before the bank starts, rudder is being applied too soon. If the bank starts before the nose starts turning, or the nose moves in the opposite direction, the rudder is being applied too late.”

Changes in indicated airspeed also may result in uncoordinated flight. Next time you’re in cruise flight, apply gentle nose-down pressure on the pitch control to establish, say, a 500-fpm descent. If you do this without adding some (presumably left) rudder pressure, the inclinometer’s ball will move slightly left. Step on the ball to return to coordinated flight. We’ve just demonstrated we can enter uncoordinated flight without a bank.

This behavior is related to the reasons we need to add right rudder pressure when climbing or when performing slow flight. (Note that the need for left or right rudder depends on airspeed, trim, airplane rigging and whether the propeller rotates clockwise when viewed from the cockpit). Basically, any time we change the airplane’s attitude—or it’s changed for us by turbulence—the possibility of uncoordinated flight exists.

What about power changes?

Another way to enter uncoordinated flight involves power changes but not always the rudder. Yes; high power, low airspeed conditions demand rudder input to maintain heading and center the ball, minimizing sideslip and ensuring the least amount of drag. But using the pitch control also may be required to “maintain coordinated flight.” How? By placing the airplane in an unwanted climb or descent.

Again, the AFH: “For example, if the pitch attitude is raised too high without an increase of power, the airplane will settle very rapidly and touch down short of the desired spot. For this reason, the pilot should never try to stretch a glide by applying back-elevator pressure alone to reach the desired landing spot…. The proper angle of descent and airspeed should be maintained by coordinating pitch attitude changes and power changes.” In other words, reducing power may have the unintended effect of increasing our descent rate. Without correcting the new attitude with nose-up input on the pitch control, we can come up short.

At its simplest, achieving and maintaining coordinated flight means using the proper amount of rudder input to match the airplane’s rate of heading change to its bank angle, if any. This is easily measured by the inclinometer in a turn coordinator or turn-and-bank indicator. But we also can experience uncoordinated flight without a bank angle, simply by changing our indicated airspeed. And adding or reducing power will knock the ball out of its cage, too.

Coordinated flight requires smooth, simultaneous use of all the controls to maximize aerodynamic efficiency, achieve desired performance and put the airplane into the desired attitude. We can ignore these realities, and accept uncoordinated flight, but which is more fun and rewarding?

The difference between a slip and a skid may be confusing to some pilots. Both are evidence of uncoordinated flight, but for slightly different reasons.

At right, the turn coordinator depicted at top displays a slip: The airplane is in a standard-rate turn to the right and the inclinometer’s ball is positioned well out of its cage, to the inside of the turn. The pilot may perceive greater centrifugal force toward the inside of the turn. In other words, the rate of heading change—turn rate—is insufficient for the angle of bank. To fix this situation, step on the ball to apply more pressure to the right rudder pedal.

The bottom turn coordinator displays a skid. Again, the airplane is in a standard-rate turn, but the inclinometer’s ball is out of its cage to the outside of the turn. This means the rate of turn, or heading change, is too great when compared to the bank angle. The pilot may perceive centrifugal force toward the outside of the turn. The fix for this flight condition is the same as, but opposite to, the remedy for a slip: step on the ball and add more pressure to the left rudder pedal.

Importantly, placing the airplane back into coordinated flight often may be accomplished by relaxing pressure on the rudder pedal opposite the ball, depending. If rudder authority is limited for some reason, or you don’t want to use it, reducing the bank angle will have the same effects.