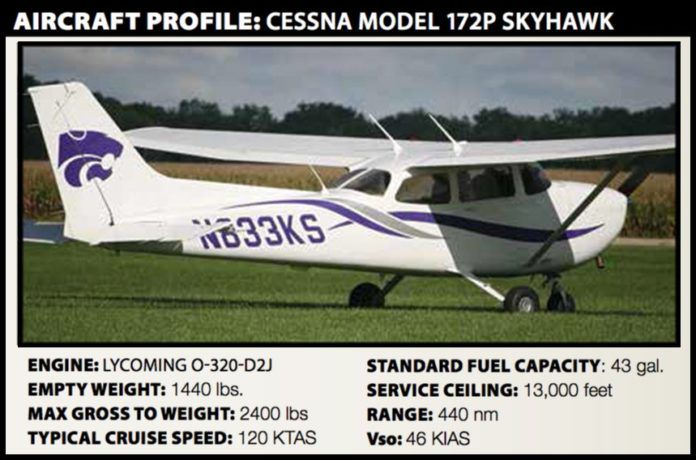 I’ve always enjoyed flying at night. There’s usually a lot less traffic, the ATC frequency is quieter and it’s rare to be delayed for an approach, landing or takeoff. Sunsets can be quite amazing from a personal airplane, and I’ve been fortunate enough to witness a few sunrises, too. Owing to day-job schedules and airplane availability, most of my instrument training happened at night and, even with all that going on, I’m by no means an expert on flying in the dark.

In fact, landing back at my current home airport at night is a textbook “black hole approach.” I don’t like it at all, and try to arrive in daylight. That doesn’t always work out, leading to maybe one for-real night landing a year at home plate, along with the rest of them.

But landings are not the greatest challenge posed by night flying. Especially among VFR-only operations, a classic controlled flight into terrain (CFIT) accident also can result. The closest I’ve ever come to hitting terrain at night involved an airport in a valley and a note to fly right traffic to the intended runway, not the standard left-handed downwind I was on. I was lucky; thanks to lights on the ground, I could see the city and the airport. And the ridges as they went past the right window about a half-mile away.

Whenever I fly at night, I’m extra careful to choose an appropriate altitude. I like to fly high to begin with, but at night, there’s simply no reason to stay low. I prefer using IFR low-altitude charts at night, since there’s not that much to identify on the ground other than well-known landmarks. I don’t need a sectional for that. But IFR charts can come in very handy when planning a night flight. There’s always a very good reason for MEAs at altitudes you may not want to reach on a short flight.

On August 19, 2015, at about 2230 Mountain time, a Cessna 172P was substantially damaged when it collided with mountainous terrain near Townsend, Mon. The non-instrument-rated private pilot and passenger were fatally injured. Night visual conditions prevailed. The flight originated from the Helena Regional Airport (KHLN) about 2215, with White Sulphur Springs Airport (7S6) in White Sulphur Springs, Mon. as its destination, a distance of 45 nm.

According to the pilot’s wife, her husband departed 76S for HLN about 2000 to pick up a friend who was scheduled to arrive on a commercial flight at 2100. He landed approximately 45 minutes later, picked up the passenger and then called his wife at 2211 before they departed on the accident flight. The pilot had flown the same round trip earlier in the day.

The pilot and his passenger never arrived. The following morning, an emergency locator transmitter (ELT) was observed. The accident site was located at about 0830.

The airplane had impacted mountainous terrain on the rising face of a ridge at 5046 feet msl. The debris path was about 100 feet long by 80 feet wide and oriented on a 351-degree magnetic heading. All major components of the airplane were present. The control cables in the empennage were traced to the cockpit; both aileron cables had separated at the wing roots, exhibiting signatures consistent with tensile overload.

A local sheriff detected an odor at the accident site resembling fuel; both fuel tanks had been breached. The wreckage pattern and ground scars indicated that the airplane impacted a rock formation on the face of a mountain during a steep right turn. An examination of the airframe and engine did not reveal any preimpact mechanical malfunctions or anomalies that would have precluded normal operation.

Examination of the attitude indicator revealed the gyroscope displayed evidence it was rotating at impact. Both propeller blades exhibited chordwise scratches and gouges at the leading and trailing edges.

The ATCT at Helena had closed for the evening, so there’s no record of the pilot’s departure. Likewise, the Salt Lake City Air Route Traffic Control Center did not have data on the accident airplane or its route of flight. The departure airport was located approximately 18 nm from the accident site at 3877 feet msl.

The 2253 weather at Helena included winds from 250 degrees at seven knots, visibility four sm in haze and an overcast layer at 4100 feet agl, or about 8000 feet msl. An area forecast at 2045 called for a broken smoke layer at 8000 feet msl and reduced visibility in smoke and haze. An Airmet was in effect for mountain obscuration due to smoke and haze.

The pilot’s wife reported she had flown with him between 7S6 and KHLN about four times. During these flights, they would typically fly over the mountain range between. She said that if the clouds were “too low,” they would circumvent the mountain.

Only 22 percent of the moon’s visible disk was illuminated that night, in a waxing crescent. Moonset for Townsend was 2243. A witness reported the visibility at 76S on the night of the accident was approximately two sm, and the sky was “pitch black.” According to Lockheed Martin Flight Services, the pilot did not file a flight plan or request a weather briefing.

The NTSB determined the probable cause(s) of this accident to include: “The non-instrument-rated pilot’s decision to conduct a cross-country flight over a mountain range in dark night conditions with limited night flight experience, which resulted in a collision with mountainous terrain.” According to the NTSB, the direct route crossed a mountain range with elevations over 7200 feet msl. The wreckage was located at an elevation of about 5000 feet msl, along the direct route.

The Board continued: “It is likely that the airplane collided with terrain because the pilot could not see and avoid the surrounding terrain given the dark night conditions and mountain obscuration. Pilot spatial disorientation may also have occurred due to multiple risk factors including the pilot’s lack of night flight proficiency and his absence of mountain flying experience in dark night conditions. Because the airplane was in a steep turn, it could not be determined whether the pilot was trying to avoid terrain that he saw at the last minute or if he was disoriented and inadvertently banked the airplane.”