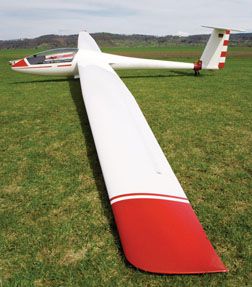 We have to do it every time we land: Whether theres at least one engine turning or not, we still have to use pitch and manage our kinetic energy-altitude-to arrive a few inches above the runway at what passes for a landing speed. When power is available and variable, most pilots seem more or less capable of pulling off such a maneuver. But when there is no power, or you really want to nail your patterns and landings by properly managing your energy, what are you going to do? Youll take a cue from sailplane pilots, thats what, and learn real-world energy management.

While Im going to advocate using the dreaded flight review-also known as the biennial flight review, or BFR-to get an add-on glider rating, the idea here is to learn a few things about flying a powered airplane from your glider-pilot brethren by discussing basic glider techniques.

Just Rewards?
According to Telluride, Colo.-based sailplane instructor Glider Bob, the best reward to soaring is that it teaches a pilot to fly safely and competently at the lower end of the performance envelope. And he should know: Hes been transitioning power pilots to gliders for over 26 years.

Sailplanes-or gliders, if you prefer-require greater skill and technique to fly well. As a result of learning to fly slowly and at a high bank angle without losing any airspeed or altitude, soaring can help you master the rudder, even if you fly taildraggers.

Every power pilot I know, who has advanced their skill set to include sailplanes, will tell you their ability to land powered aircraft grew exponentially after learning to soar. Most of that growth comes from having to fly precise patterns in gliders, focused on exact airspeeds balanced by controlling both the forward and vertical velocities of the aircraft with mostly very subtle pitch changes.

Plus, gravity couldnt care less about why you botched a final approach or how much you just learned. There are no go-around procedures for gliders.Gravity will win this argument. Worry about the excuses later. Right now, your only two options are a smooth arrival or a gonna-do-it-better-next-time landing.

Regardless of your choice, at any given moment, the ground is on its way up to meet you, unless youve found and are circling in a good thermal. In a sailplane, you have to be able to solve your aeronautical problems quickly and on the first pass. There are no second passes.

Got Energy?
All good piloting in any type of aircraft boils down to a single concept: the proper management of the available energy. Although this isnt a commodity trading house, youre essentially exchanging what you already have to obtain what you want next.

In powered flight, youre not as readily conscious of this as you push open the throttle or twist a few more rpms out of the prop in an attempt to get home faster. Youre giving up a little more of the fuel stored in the wings-also a form of kinetic energy-to arrive at your destination earlier. Of course, by burning all that extra fuel, youll possibly have fewer options when you arrive if something goes wrong. In a glider, thats a big chunk of all that you get to think about.

As gravity constantly draws the glider towards the earth, the pilot gets to decide whether to expend this energy by dropping the nose and going faster, or by inching back on the stick and trading that speed for altitude.Or at least for losing less altitude than if the airspeed were higher. That sounds so easy when you put it on paper. It takes a lifetime to perfect that concept in the sky.

Soaring keeps you on your toes because no matter what, in a sailplane, you are constantly coming out of the sky at roughly 200 fpm, give or take, depending on the sailplane youre flying. The only resource you have are your eyes, your mind and your instincts to find sections of air that are moving up faster than youre presently moving down and to skillfully position yourself into the center of those air masses. Easy on paper. Hard in practice. The kicker is, wherever there is air moving up, somewhere in the vicinity, there will also be air moving down. The goal is to speed through sink, linger in lift.

I am all for the electronic gizmos and gadgets installed in modern aircraft. Trust me, in actual instrument conditions, Im the first guy to use the electronic tools to reduce my workload. But soaring is a heads-up, stick-and-rudder type of flying. Too, every aero-tow takeoff is an intense formation flight and more than likely, if you find a nice thermal, youre going to be sharing it with other gliders.

Differences
Of course, sailplanes fly like airplanes: Push forward on the stick to go down; pull back on it to go up and nudge it left or right to turn. But thats pretty much where the similarities end. For one thing, the sailplanes wings are much longer than, say, your Skyhawks, and have correspondingly larger ailerons. The wings are longer to generate more lift and the ailerons have greater span to ensure sufficient rolling motion at the sailplanes lower airspeeds. But the combination also creates something with which most powered-plane drivers dont have to contend: adverse yaw.

If youve never experienced a healthy dose of adverse yaw, you might be in for a treat. In fact, it can be a little disoncerting, not to mention frustrating, when you command left aileron and the nose move smartly to the right, before eventually hewing around in the direction you desired. You learn to make some healthy, coordinated rudder inputs, perhaps even leading your turns with rudder, depending on the sailplane.

Equipment is another area where powered planes and sailplanes differ. Theres no use for engine instruments, as an example, and no room for fancy glass-panel, long-range navigation equipment. Besides, all of that exacts a weight penalty and, well, when your ability to make it back to your car depends on extracting lift from the atmosphere, uncessary weight is the last thing you want to carry. As a result, a sailplanes instrument panel is downright Spartan, again compared to a typical Skyhawks.

But there is one instrument youll find in the sailplanes panel that wont be in the typical Skyhawk: a variometer. This is analgous to a vertical speed indicator, but is more sensitive. Glider pilots use it-and the seat of their pants- to determine when they have found lift and its quality.

Of course, the mother of all differences between sailplanes and powered planes is the lack of a powerplant. Whether the sailplane is towed aloft by an airplane, by a car or is a self-powered motorglider, the idea is to use Mother Natures energy to stay aloft. In addition to learning airspeed control (see the sidebar on the opposite page) and coordinated steep turns at low airspeeds, it will eventually become necessary to land. This is, perhaps, where powered-plane pilots learn the most.

The FAAs recommended sailplane traffic pattern begins when the 45-degree entry is complete and the aircraft is established on the downwind leg.Conventional legs follow, but at lower altitude. For example, the FAA recommends the distance from the downwind leg to the landing area should be approximately to mile. On the downwind, the glider should descend to arrive abeam the touchdown point at between 500 and 600 feet agl.

This is where the powered-plane pilot can gain the most insight: managing kinetic energy, through airspeed control and spoilers/speed brakes, to arrive onspeed a few inches over the runway.

Just Do It
Doing your BFR in a sailplane means stepping back from a type of flying with which you are already comfortable to embrace the fundamentals: airspeed control, coordinated flight and accurate landings. The idea is to sharpen and hone skills which you already have, but which might be a bit rusty. Learning something fresh-whether its soaring, seaplanes, rotorcraft or hot air balloons, for that matter-will advance a pilots skills more than running through a familiar set of maneuvers in an aircraft and in airspace to which youve grown accustomed.

Sailplanes and soaring will help you focus back on the basic idea that you control an aircraft with your hands, your feet and your mind. And youll do it with a whole lot more finesse than most pilots presently flying.

One last thing, before I forget: The visibility from sailplanes can be breathtaking, enabling a pilot to see over the nose and out both sides all at once. Theres simply something more natural about it. As a benefit, youll also learn how to improve your powered flying. And its fun. What a deal!

Also With This Article
“A Safety Add-On?”
“Playing Airspeed For Keeps”
“Resources”