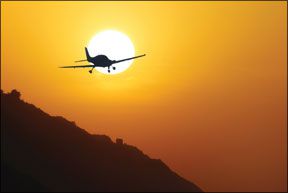 Weve all been through enough ground school to know and understand that high ambient outside temperatures adversely impact aircraft performance. The relationship between temperature and altitude, of course, is termed density altitude, which describes a locations pressure altitude adjusted for temperature. To put it another way, density altitude is your elevation when measured in terms

When density altitude is higher than our location, the airplane thinks its at that higher altitude and performance suffers. Got it. But what else do you know about density altitude? For example, do you know it also impacts engine and propeller performance? What about humiditys impact, if any? And why wont a turbocharger overcome all this? Lets find out.

Theres no rule of thumb allowing us to calculate density altitude in our head or by counting appendages except “its hot, so density altitude must be high.” Instead, we need to use something called a DenAlt (DENsity ALTitude, get it?) slide-rule computer, a computer program or a prepared chart/table to calculate the effects of pressure and altitude. The formula in the sidebar on page 22 also can be used to approximate density altitude; its resolution may, in fact, be better than some manufacturers performance charts. The chart at right is a good example of how to determine density altitude in the field. Your aircrafts POH may have something similar in the performance chart section, or your glass panel may do it for you.

When we talk about how density altitude affects aircraft performance, we generally think of how the wing interacts with the relative wind: Since the airs less dense, theres less relative wind, less lift and less performance. Thats true as far as it goes, but thats not all we need to consider.

Instead, the engine takes a hit, too. Look again at the chart at right. Looks very similar to what you might see in a takeoff-performance chart for many airplanes, doesnt it? (See the sidebar on page 22.) Thats because the engines performance isnt tied to actual altitude but to the airs density, just like the wing. You knew that, of course, because you lean the engines mixture at altitude to compensate for the thinner air. The same things going on when the ambient temperature is high-theres less air. Therefore, you should consider leaning the engine for takeoff in high density-altitude situations. How high? How high do you have to be before leaning for takeoff on a standard day? Same principle applies.

Think a turbine engine is immune? Think again. The thermodynamic laws apply to all engines, whether they burn avgas or kerosene. Early jets and turboprops were more susceptible to density altitudes effects-less-dense air means reduced pressure inside the turbine. Engineers learned to flat rate them, or build in greater power output while limiting it to suit the airframe. When at high altitude, the engine has some reserve power the pilot can tap to generate the maximum allowed horsepower.

Finally, theres another airfoil we have to consider besides the wing: the propeller. Just as theres less air flowing over the wing to generate lift, theres less air against which the prop can push to generate thrust. The combination of reduced lift generated by the wing, reduced engine output and reduced propeller efficiency all combine to limit runway, climb and cruise performance in ways detailed by the charts and tables in your POH. While the chart on the preceding page details the increase in density altitude as temperature rises, only the aircraft manufacturers testing and POH tables can depict the total performance hit.

In many geographic areas, high heat is accompanied by high humidity. When youre flying on a hot, muggy July afternoon, the less-dense air caused by the heat isnt all you have to worry about. Instead, humidity exacts a penalty on aircraft performance, too, in addition to a high density-altitude situation.

The standard atmosphere against which we compute performance is presumed to be completely dry. Thats rarely the case. Instead, it usually contains some amount of water, as vapor. In basic terms, a cubic foot of air at an agreed-upon pressure and temperature always contains the same number of molecules. Adjust either the pressure or the temperature, and the number of molecules changes. Thats why density altitude has an effect.

Humiditys effects on density altitude are relatively minor and generally arent considered when doing aircraft performance calculations because air cant hold that much water vapor. But theres still an impact as the airs density is further reduced in hot and humid conditions.

A widely accepted rule of thumb is to increase density altitude an additional 10 percent when humid conditions are encountered. How humid does it need to be before adding that extra 10 percent? You be the judge. Our rule of thumb would be, if you can feel the humidity, or see it in the form of fog, its time to consider its impact on aircraft performance. Meanwhile, when considering humid air, dont forget carburetor icing.

What else in the airplane is affected by high altitude? How about the pilot? The pilot breathes the same less-dense air through which the airplane is flying. If-as we discovered when considering humidity-there are fewer air molecules supporting the wing, entering the engine and being pushed by the prop when the pressure is low and the temperature is high, there also are fewer of them entering the pilots blood.

These pages have covered the physiology of high-altitude operations and hypoxias effects on a pilot in several relatively recent articles; we dont have space here to rehash them all. Remember, however, that using supplemental oxygen is strongly recommended when flying for extended periods above 8000 feet msl in the daytime and 5000 feet at night. Research the winds aloft forecast for the advertised temperature at your planned cruising altitude and do the math. The answer may surprise you.

Modern turbocharging and turbonormalizing can easily transform a normally aspirated airplanes performance at all altitudes. In the mid-teens and higher, an extra 20 knots of true airspeed is easy to find, and the higher you can go, the faster you can go. With some turbo installations-especially older ones-that efficiency isnt always realized, however.

One reason involves turbos equipped with automatic wastegates. In this configuration, the wastegate is only partially closed, if at all, in relatively low-altitude operations, and doesnt add much since most of the air compressed by the turbo is dumped overboard. Because the turbo increases exhaust back pressure, some efficiency and power is lost, also. Additionally, the turbo heats the induction air as it compresses it before entering the combustion chamber. Intercoolers have been developed for many turbocharger and turbonormalizing installations to reduce the heated airs impact. However, the heated, compressed air exiting the turbocharger and entering the combustion chamber effectively increases the airs density altitude. Which is where we came in.

The bottom line: Density altitude affects even a turbocharged engine, though perhaps to a lesser extent than a normally aspirated powerplant.

If all you do is fly a lightly loaded airplane from airports with lengthy runways at or near sea level, you rarely need to worry too much about density altitude. The rest of us, who might be based near sea level but venture off to far-flung-and hot/high-destinations with relatively short runways need to pay more attention.

As always, the first hurdle is simply coming to grips with the fact the aircraft wont perform the same. Then we need to swallow some pride, crack open the POH and run the numbers. Dont forget to consider humidity, plus the fact youre out of practice and the right main brake has been dragging a bit. Oh, and the extra 50 pounds of “stuff” in the back of the plane.

Each year, a group of people roll off the end of a runway during hot/high takeoffs. Dont be one of them.